Ship Balance | The Vexor Navy Issue is still the King

It’s not often I get to/take the time to write up a piece about a ship twice. Still, I’m coming back to the Vexor Navy Issue after the changes because I think it really does deserve the attention.

There’s been a lot of mixed attention given to the VNI changes, and so it would be unfair of me if I didn’t give the VNI a solid dialectic; examining the changes to the ship from both sides of the fence. So I’m going to break this article down into three sections: The Good, The Bad, and The Botter.

The good is so… so… very good.

As a purely PVP ship the VNI was already a beast, but it’s actually gotten a lot more dangerous than I’d imagined this balance pass would have favored. Usually when CCP balances a ship they’re trying to correct for an over-powered meta – and that was definitely the case here, no doubt – but they do not usually make the ship more OP than it was. This is not the case for the Vexor Navy; they have definitely given it a realignment in step with its intended purpose as a solo cruiser, small-gang skirmisher, and face-melt fleet brawler.

Here’s the fit I’ve been rolling around in lately (click to enlarge): 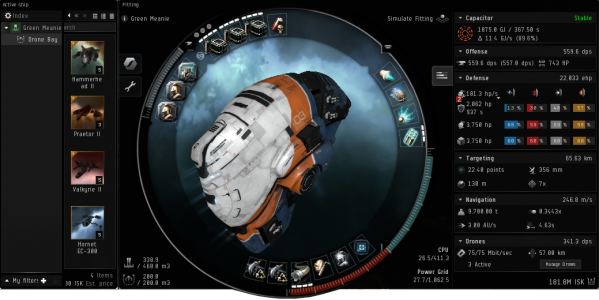 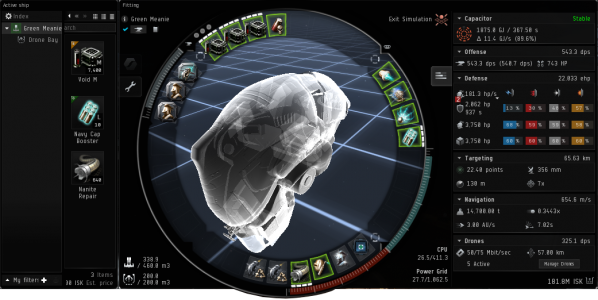 I intentionally kept my version of PyFA – the Python Fitting Assistant – on the last revision so that I could demonstrate the PVP gains the fit has enjoyed with the changes the developers have introduced. So here, for your viewing pleasure, is the same fit on the old ship with one fewer turret, the same number of drones, and the ‘original’ stats. 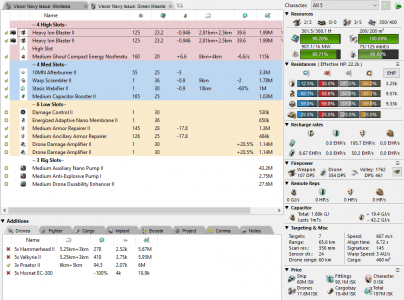 It should be noted this particular fit is designed for solo PVP. Comparing apples-to-apples the VNI, exactly as I have it fit gains an extra 100 dps with the role increase to hybrid turret damage and tracking and sees a huge increase in its repair amount over the old stats.

What it loses out on is the capacity to field 5 heavy drones, a reduction of 46 dps overall from the old fit with 5 drones and the same guns as compared to the new fit. The new fit, however, still deals 218 dps from guns alone and that is with my imperfect skills. So very much an extremely capable brawler, and even with my less-than-stellar fitting ability it is a ship to be reckoned with. Those theory-crafters out there who are good at what they do can make the VNI into a thing of savage charm and devastating effectiveness.

For what CCP amusingly refers to as “Low-attention anomaly ratting” the Vexor Navy Issue used to be extremely over-powered, which was of course the majority impetus of this balance pass. Any null-sec alliance member could, secure in their own space under the safety of a capital umbrella, put out a half-dozen VNI into anomalies, put out drones, set them to aggressive fire, and set the ship on orbit. When they clear the anomaly, just warp them to new ones; rinse-and-repeat.

With enough alt characters the VNI allowed both genuinely invested players and those who… aren’t… the ability to generate super-ratting levels of income with a ship which could be replaced, fully-fit, for approximately 90-110 million ISK a-piece. Which, quite frankly, is entirely why the ship deserved the attention it got.

Even I covered the use of the ship in my ‘Ratting for Income‘ video for newbros on YouTube (though admittedly I also recommend the use of other vessels as well) and I’m an advocate for active ratting.

A typical fitting for a high-passive-regen shield-tanked VNI (click to enlarge): 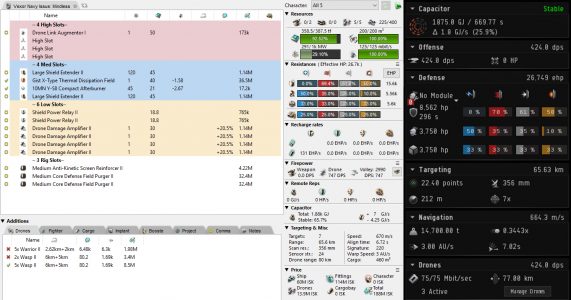 At face value the typical null-sec AFK anomaly ratter loses almost 300 dps using drones alone! The old fit put out almost 750 dps as compared to the new stats where the same fit gets only 424! That’s a hell of a fall and entirely what CCP is going for. When compared to the insubstantial 48 dps loss suffered by similarly fit brawling VNIs, CCP has delivered on their promise to weaken the Away-From-Keyboard ratting income without substantially hurting the ship as a combat vessel.

For a lot of people who were using VNI ratting as their sole means of producing income to support their PVP or other activities, and relied upon it for self-sufficiency, this is going to hurt. There’s no two ways about that, and there’s frankly little to be done about it now that the change is made.

It’s well within the meta that New Eden should be as Thomas Hobbes likened it in his work Leviathan:
(Of Man, Being the First Part of Leviathan, Thomas Hobbes, April 1651, Ch 13 – The Harvard Classics, 1909-14)

Or, as CCP Falcon perhaps more eloquently put it:

At the end of the day, ultimately the people that CCP set out to hurt are hurting. Though I am under no illusion that this has in any way stopped the activities of botters or even slowed them down; but it has hurt the amount of money they can generate in the same time frame, with the same tactics and tools, as they used to.

We know this because of the price drop (video) we observed on the VNI when the Drifter Invasions began in June. As soon as it became apparent that Drifters would warp to anomalies and start killing ratters, we saw the supply available on the market increase and prices fall. That said, the market defied my expectations: I had expected the price of the VNI would continue a free-fall into the Null-sec blackout, but the prices stabilised mid-July and have held steady throughout and has even begun to recover.

We have already seen the adaptability of botters, moving their alts into low and high-sec and using them to mass-farm mining sites, anomalies, and asteroid belts as another way to fill their wallets.

So, are the botters out? No. Are they rethinking their strategies? Yes. Is it getting harder for them to make the same gains by exploiting our game and some players’ need for immediate gratification? Yes.

Are the active ratters and those who want to play the game passively really affected all that much? Not really.

If anything, the VNI is an even better ship for running abyssal sites today than it was, which benefits everyone.

This is a win-win in my book, and I welcome our new savage overlords.

I knew I would have fun in this VNI, even if there were things I could do differently with the fit. A corp-mate suggested I should swap the drone durability rig for a Nanobot Accelerator, lose the Nosferatu, and replace the afterburner with a Micro Warp Drive. The MWD definitely helped me to pounce better, and the accelerator was definitely the right move. However, with the MWD losing the Nosferatu really hurt because even pulsing the prop mod, I kept running out of capacitor in fights. However, the fit overall has me very, very impressed.

I decided to take it out for a late night roam on my way back to Solitude for the evening, hoping to fight anyone I find along the way, and my route home took me through Syndicate.

I thought, “What the hell, I’ll stop in PC9-Ay and mess with some Unistas* and see if they’re up for some content.” *Unistas are what EVE University students typically call themselves. This was after 07:30 EVE, so I wasn’t expecting many people in the area to be online.

So I jumped into system, warped to one of my old pings from my days with the University, and then proceeded to try to bait a few out. As it turns out, a corp-mate of mine was hanging out in the station and as I issued some challenges – I just wanted to test the fit – they invited me to join them. (This is not unusual in my roams.)

We proceed to gatecamp the PC9- gate to the adjoining system, but the Tengu scouts us out and neither him nor his buddy want to come play. Many disappoint, such sad.

So we decided to switch tactics and while we had a bunch of dudes together go for a late roam into Placid.

Which is where we ran into this fine sir: 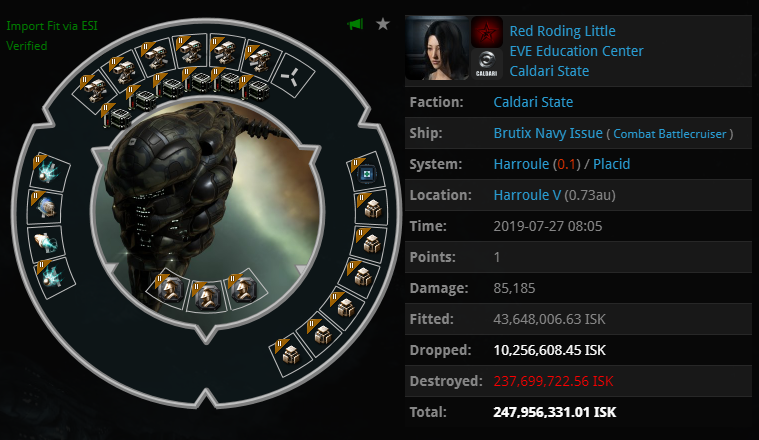 Now, it’s important to realize that while he maybe could have focused more on dps, that’s one heck of a hull-tank.

That’s riding the edge of 200,000 EHP with 60% resists! And because the Brutix Navy is still a beast, even without magstabs it still pours out 511 dps without drones. And he had 5 Warrior IIs.

My little VNI face-tanked that, and the damage from his drones, and it still took 8 of us nearly two minutes to kill him flying a kitchen-sink composition. Overall a good trade on the loss of a Hecate (Thanks, Arrek!) It was a close fight for me, and he nearly had me beat, but it went really well. A great fight overall, and I give my thanks to Red Roding Little for being out for some content.

In sum, I would say that if you’re looking for a modification of this fit? Go for an enduring MWD and step the Nos down to a small faction Nosferatu.