THE TRUTH ABOUT H1Z1 HACKERS

If you don’t know already, Daybreak Game Company’s H1Z1 is a zombie survival game with an average of 14,000 concurrent players last month. H1Z1 has different game modes and play styles, such as Battle Royal (BR), which is basically a run-and-gun deathmatch mode on a timer. Everyone starts in the holding ground until a critical mass of people join and the game begins. At this point, you will hear a lot of “China #1” and the normal internet screaming. This game mode was based off Survival, where you are spawned at random location on the map and you MUST survive until the end of time – or at least, the server wipes that accompany many updates. Most players will gather materials for a few days and build up a base to hold their high valued loot, such as guns, ammo, tan military backpacks, and most importantly…Vehicles!

Player-built bases are supposed to be your safe house, allowing you sanctuary from the world outside, and long-term storage your valuables. When H1Z1 first came out, there were plenty of bugs which gave players an advantage if they knew what they did and how to use them. With any game, if players can get an advantage over others, than some will take and abuse that power.

Fast forward to now. This is where hacking comes into place. H1Z1 has a very large community of hackers. I call them a community because they all work and improve together in some sort of way. The most popular third party program in H1Z1 right now is TMcheats. For 15 dollars a month, a user can get access to these cheats and gain the power to basically do what they want, and how they want to do it.

I’m here to answer the questions about these hacks, and tell you what players using this program can and cannot do. A large amount of the community that plays H1Z1 really doesn’t know what hackers are capable of doing. Some of these people want to know badly enough that they try hacking for themselves, with many of these people getting suspended or banned from the game. Many of the helpdesk tickets Daybreak receives from people banned for using cheats, such as myself, include somewhere in their statement “I was just using hacks to see what it was like. I didn’t steal anything from anyone” or “We were only noclipping into our own bases to see what our defence was like.”

So the first thing first, the program that was used in this test was just one of hundreds. This article only covers what can be done with TMcheats. 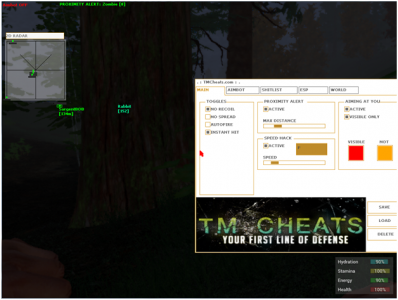 This is the main screen that leads you through all the options of the simple things, like disabling recoil and spread on weapons. “Proxy alert” tells you when a player is within a set distance from you. Cheaters can also set an alert on the top of their screen indicates when a player is aiming/looking at you, though this screen mostly includes the controls for speed hacks. Keybindings for speedhacks are also available, allowing cheaters control in increasing their speed to a sprint, or Speedy Gonzales levels.

The main reason people download hacks is for Aimbot and ESP. With an aimbot, the program aims for you, locking the cursor on a given target up to a set distance. The program can also fire on its own, meaning that the player is only there to press “W” and steer the character. ESP allows the user to see objects and players inside the distance the user sets – up to one thousand meters – with the name of the object encased in a box, and color-coded with the distance it is away from the player.

H1Z1 has over 500 objects, including food, water, tools, guns, ammo, animals, vehicles, medicines, zombies, and players. In a large city like Pleasant Valley (PV), thousands of these objects are scattered around the city, leading to massive frame drops for the user. TMcheats has given the user a filter to only display what the user wants to loot, cutting down the performance overhead. ESP does not allow the user to see items inside of containers, Vehicles, or any other storage device, or items that are already placed, like Bee Boxes, Grills, or Gates/Walls.

Next are “High Risk” hacks, cheats that are as the name describes high risk/will get you banned faster. The most well-known feature is no-clipping. This allows the user to clip through the gates/walls of your base, buildings, vehicles, and trees. The ability to bypass physical security allows a hacker to loot or wreck your base or vehicles at their leisure.. The good news is Daybreak knows about this, and a fix is in place; if someone does not own or have access to a given construction, they will get killed in three seconds if they don’t leave.

The bad news is that this protection is removed if the door to the shack or room has been opened in the past thirty seconds. Someone using these hacks can clip into your base and wait until you open a door, providing them a window to kill you, and/or steal any loot out in the open. Another casualty of this is that Daybreak recently disabled placing Bee Boxes (a main storage container) inside first story rooms, allowing anyone who stores anything inside of Bee Boxes in the main open part of their base accessible to hackers.

The teleport feature is pretty self explanatory. This allows the user to teleport up, down, forwards, or backwards up to 50 meters.

Super Kill is a new feature that TMcheats has added, allowing the user to basically kill anyone with anything at any distance up to a kilometer.

WHY I DID IT

My friend and I were tired of being killed and having no-clippers steal our hard-earned loot from our base. This was back before the server looked out for this. Instead of moving, on we decided to stoop down to their level and do the same to them. We followed the hackers around for several days, and we were able to get close enough to two of them. We watched them clip into bases, stealing loot, and going on a killing spree until one day they messed up and led us to their base. At this point, we were like high school wannabes going to their first party. we scrambled around the internet trying to find the overpowered program these people used to ruin the great times of so many players.

It didn’t take us long; we found TMcheats in about ten minutes.

We read the fourms learning as much as we could, looking for information on what the program was about, what could we do, and reviews. There was not much information to be found, so reasoning that you only live once, I got a one month sub for 15 dollars and downloaded the program.

So here I am, a high-level pro hacker ready to take over. Wrong! I was guinea pig, just here to check this gig out for my friend who was too scared to use it himself. We went to a low pop PvE server to try figure everything out and gain a few skills before we go the big leagues of the high-population PvP servers. I went around speed hacking all over the map, flying past cars, aim botting, and clipping into people’s bases. After about an hour or so of all of this, I caught my first ban. Well, this is a bummer.

A few days later, I sent in a ticket to Daybreak with cookie-cutter excuses. Things like “I was just trying it out” were said, which earned me a form letter that basically said “Oh thats cool, please tell me more…And by the way, your account is banned permanently.”

We sit around for about a week or so, playing various games like PlanetSide and CSGO. I worked up the courage to buy another copy of H1Z1, and we played legit for several weeks, only to get wrecked by more hackers every day. Our cycle started all over again. With the ban fresh in mind, I loaded up TMcheats and read more on the forums about how to not get banned, and what settings to use.

This worked perfectly. It turns out that a hacker can go hundreds of hours undetected, based on their play style. If you’re no-clipping past everything and speed hacking around the map, you will get caught faster than you can run. By using only ESP and Aimbot on low settings for only short periods of time (big gun fights), the hacks appeared to be more-or-less undetectable. For several months, I hacked for short periods of time, with none of the people I was playing with finding out.

Once I really get the hang of it, I slowly started letting other people know what I was doing, only to find out a few of them having been doing the same thing I had been doing for the past couple of months. Others had lots of questions about it, and wanted to know how I had been going on for so long without getting caught. I leveraged my newfound infamy in my clan to gather a group. We went around killing everyone in sight, racking up over 300 kills a day. This was great for gathering loot.

One day I got careless. The game was getting boring to me. I went back to my old ways of clipping into to bases and speed hacking past cars, shooting the driver and stealing all that they had. This lead to my second and last ban about five months ago. At this point in time, I still play H1Z1 as a legit player – I am not using any kind of hacks or third party programs. With the knowledge of how these hacks work, I have been able to defend my base against those who use them.

99% of the people I played with still dont know this about me. This is my way of telling my story. I want to let everyone know that if you are wanting to download these hacks because of someone else…Don’t. Be the bigger person, and show them you don’t need hacks to have fun in this amazing game. I am not proud of my time hacking in H1Z1 and bringing others people’s enjoyment down, but I am proud of the knowledge that I gained from doing so.

I am share this story with others to keep them from making the same mistake I did, and I want to give others an understanding about hackers and how to fight or defend against them. They will get banned sooner or later – just make sure you’re there for the later, and not them. If you have any questions after reading this article, I will do my best to answer them and share any more information you wish to know. You can get in touch with me through the comments, or my Steam account “kashii” – the profile picture is a logo of a kid eating icecream.

Thank you for your time in reading this. I hope you gained some knowledge to help you in the world of H1Z1.