Early on August 17, a Triglavian Invasion spawned in the high-sec pipe system of Niarja. This system is known as a graveyard for careless, overstuffed freighters making the nine jump trip between Amarr and Jita.

These Triglavian Invasions have been happening in New Eden since May. For many, though, they are a weird thing that happens outside their experience of EVE (Ok, that might just be me). With that in mind, INN asked EVE Twitch streamer Arsia Elkin of Electus Matari—one of the FCs for the EDENCOM Defense Initiative—to explain how the invasions work.  The targeted systems themselves can be found in the Agency, and work through a “capture the flag” type bar mechanic. 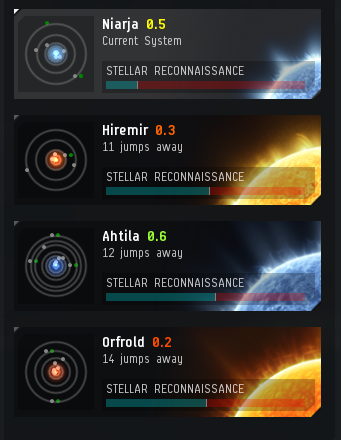 Initially, the bar is set to 50% in ‘Stellar Reconnaissance’. If a system doesn’t progress through recon in a couple days, both sides leave and it returns to normal with no new state. To move the bar in either direction, you have to run the NPC sites in the system.

Only blue stars and certain yellow stars can go beyond stellar recon into Liminality or Redoubt. All other star types become ‘minor victory’ systems. EDENCOM Minor Victories have been re-invaded by the Triglavians, but with the more powerful NPCs, these ‘re-invasions’ don’t tend to go well for the Trigs.

Entering Liminality reduces the system’s effective Security Status, rendering the system lowsec. If it was already lowsec, it shows as null. If it reaches Final Liminality, even a highsec system is effectively nullsec. However, at no point do bombs, or bubbles work in these systems. If the system was highsec, no cynos or MJFGs. Whatever the original restrictions of the systems were, these still hold. The three things that change are CONCORD Response, gate guns, and security status hits. According to the devs, capitals also cannot gate into formerly-highsec systems. Triglavian Minor Victories do not impact Security Status.

In addition to all anomalies, roaming fleets also count as a site. Arsia gave us a basic rundown of the sites in an Invasion system. Keep in mind that equivalent sites and roaming fleets exist for the defending NPCs.

These are fleets of NPCs that run around the system. They warp to planets, belts, stations, structures (including POSes), gates, POCOs, and sometimes bug out and end up in the middle of nowhere. They fight roaming fleets of the other NPCs and the NPC vs. NPC fights do move the bar. When you’re fighting a fleet, more fleets may warp in as escalations. While a roaming fleet technically gives the least influence, they “close” faster than any anomaly and keeping them down will keep your side’s NPCs safe and let them build up, hence preventing you from losing influence. You don’t need to kill every rat; when the NPCs all warp off in various directions, you won.

Roaming fleets range in size from one ship to large fleets. In Liminality there are also special response fleets when attacking a werpost or superextractor (structures that spawn in belts in Liminality—good to kill). Both are a little spicy. The werpost response fleets are straightforward, but the superextractor response fleets are bugged; they lag you hard if they’re on your overview (expect when they bug out and show up white), so switch to a PvP tab and lock from the brackets in space. We usually have a couple combat probers just moving probes from celestial cluster to celestial cluster to find roaming fleets, warping from one to another as we kill them.

These are available off the bat in the first stage (Stellar Reconnaissance). They are the easiest of the sites. While they technically give the least influence of the anomalies, the close the fastest by far and are hence usually the most valuable anomaly.

These spawn at 75% for either side in Stellar Recon. They’re just spicier than Emerging Conduits and take a little longer.

These spawn in Liminality or Redoubt (the second stage for each side respectively). There’s a lot more NPCs, but it’s entirely straightforward.

These spawn in Liminality or late Redoubt. They require a decent fleet. A competent 20-30 person with T2 logi and battleships should be what you’re shooting for. Basically, you kill NPCs for a while, then a dreadnought warps in. You burn over to the dreadnought as fast as you can and get into a tight orbit. You want to be in a tight orbit around it before it goes into siege (indicated by a timer on the screen). It wrecks you if you’re not orbiting it closely when it sieges. After you kill the dreadnought, you need to burn over to the CONCORD towers (they give you a big damage boost) and  shoot the structure in the middle of the room. A friendly dreadnought will warp in to “help” (it’s an idiot).

There are special system effect beacons in Liminality and Redoubt. They’re almost like a mini-world ark site. You need to use T1 (or faction) cruisers to enter when they’re gated (which seems to be weird and buggy as to when they are and aren’t gated). And some NPCs spawn to try to stop you from destroying it. The EDENCOM ones give some racial bonuses such as web strength in Minmatar systems. Triglavian system effects give remote repair strength, cuts max lockable targets in half, and reduces warp speed.

At 30% remaining in Liminality, the World Ark Assault Vector spawns. This roughly coincides with the system entering ‘Second Liminality’.

Engaging the Xordazh World Ark requires a high-end coordinated fleet. The World Ark itself is just an object that spawns werposts and Triglavian NPCs in large amounts. Destructable AoE Towers are put up over the course of the fight that have certain effects like restricting everyone to one target, webbing everyone, booshing somebody randomly away, or doing damage. It takes around an hour to complete.

So far, only three of these sites have been beaten.

Triglavian NPCs come in a variety of flavor combinations. In addition, at certain points in an invasion, NPC behavior changes. For example, around 25% or 75% in stellar recon, the rats get stronger. Trig (and some EDENCOM) NPCs have special labels to denote subtypes:

Raznaborg—The prefix “Raznaborg” means the rat is weaker than usual. EDENCOM “Scouts” correspond to these.

Zorya Triglavians—These are even stronger Triglavian NPCs. Each empire has their own flavor for this tier: Exalted for Amarr, Chief for Minmatar, Executive for Caldari, and Presiding for Gallente.

Each of the other Triglavian prefixes corresponds to some type of characteristics of a rat.

“Starving” ones neut you. “Liminal” ones do a bit more damage with special missiles. “Renewing” ones have more remote repair. “Anchoring” ones warp scram. Those are probably the most important ones.

Arsia was also kind enough to provide a quick overview of how EDI goes about their work:

“Usually we start by having a wing for emerging conduits and a wing for roaming. One clears the conduits and one goes after roaming fleets. As our fleets grow, our third wing is a flex wing that’ll do roamings in an ideal world, but goes and closes emerging conduits if the conduit wing is ever too slow to keep them all down. Two solid roaming wings with a couple probers each can usually keep a system clear of NPCs).

“Emerging conduits + roaming are by far the two fastest ways to gain influence. The larger conduits should only really be tackled if you’ve got the roamings and E.C.s covered for additional influence. The Leshak rats do by far the most damage, but large ships can have the hardest time killing the frigates sometimes, so ensure that each wing has a couple ships that take out frigates well (Vindicator is probably the best, but there are plenty of “good” frigate killers).

“Slowing your enemy down is also sometimes done. People do “offensive logi” and rep the rats you’re shooting. This is one of the main reasons why EDI uses a lot of Artillery. It doesn’t take much coordination to volley through the logi, but smaller or less coordinated gangs that run conduits can be affected. We’ve also suicide ganked the Triglavian players sometimes. O-logi ships are often the most vulnerable because they don’t have their friendly fleet to shoot the Catalysts when they land, but you can also sometimes get a kill on the Triglavian conduit fleet with a few Catalysts.”

Why does this matter?

So, now that you know what the invasions are about in terms of fight mechanics, why does this matter, and why are Brave sending out pings to their members to get in fleet to go save Niarja?

Don't worry high sec, capsuleers are coming to save you again… pic.twitter.com/W9dwClboVN

So, in New Eden there are the Big Four trade hubs (and Hek!). There is Jita, the Walmart of EVE where you can pick up anything you want at one low, low price. Then there is Amarr, 9 jumps away. Dodixie is up next, over in Gallente space, with Rens rounding out the group down in Minmatar areas.  If Niarja falls to Triglavians, then the nine jump route that freighters take from Jita to Amarr becomes a 45-jump route taking you round a very scenic route through New Eden 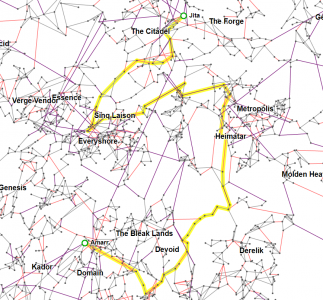 At the time of writing, the system is in the Stellar Reconnaissance phase of the invasion. It has been hovering around 83-85% towards the Triglavians winning the phase for the past hour. 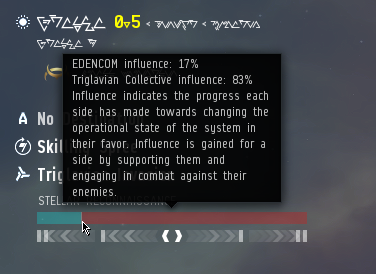 If the Triglavians are successful in achieving Final Liminality they will cause a shakeup in the high-sec trade hubs and traditional routes. The current routes have existed in EVE since the highways were removed, way back in the mists of time when Yulai was still the main trade hub.  There are competing theories about what the fate of Amarr would be if this happened. All sides agree that the link between Amarr and Jita would be broken, but one group thinks that Amarr would begin to function as a proper regional hub for the Amarrian regions of space. Any mats needed from Jita would be shipped in (slowly) using ships built for traversing lowsec such as the Deep Space Transport or Blockade Runner. A second school of thought says that Amarr would wither and be replaced in the area by another, more convenient hub for Amarrian space.

There is also the possibility for players based in Amarr to travel around to Dodixie. That is a 15 jump route, which is a little shorter than the current route Dodixie dwellers have to take to get to Jita.

Whatever happens with the battle between Edencom and Triglavians, this is (probably) the most exciting thing to happen in high-sec for quite a while, and INN will keep you updated on it.