A comment on the first edition of the Drafting Table first planted the bug about using a Cane. I had a cool cut-a-way of a Cane that I thought looked really nice as the header. Someone in the comments mentioned that while I had the picture of a Cane, I was talking about the Hyperion. So I made a mental note to do the Cane at some point in the future. Fast forward to now, when I was able to pick up two very cheap hulls just after having finished training for a Sleipnir I decided it was time. 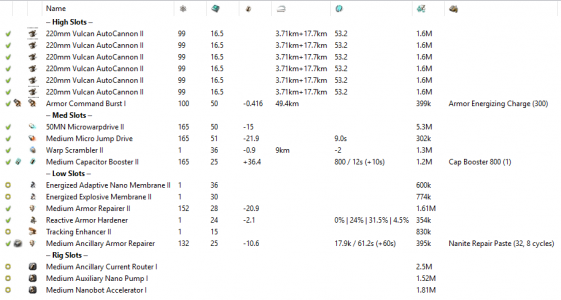 High Slots (7, Six Turret Hardpoints, Two Launcher Hardpoints): With all of the bonuses, the choice of Medium Projectiles is straightforward. I selected to 200mm Vulcan AutoCannon II due to its combination of fitting requirements and damage output. For the utility high, I opted for an Armored Command burst with Armor Energizing charges. This is done to improve the resistance profile, providing both more EPH and in turn more effective repairing power.

Mid Slots (4): The mids slots are fairly textbook. First is a Warp Scrambler. Despite the bonus to range, Autocannons are a weapon with very short range, so the additional utility of being able to shut off an MWD and the higher war disruption are better than the extended range of a Disruptor. Second is a Medium Capacitor Booster II, for providing quick injections of power to keep the tackle, reps, and propulsion going. Last are the two prop mods, a 50mn MWD for on-grid maneuverability and a Medium Micro Jump Drive for quick repositioning and escape.

Low Slots (6): I got a little creative with the lows, forgoing a triplet of common staples. Five of the slots focus on the tank capabilities. First up are the two Medium Armor Repairers, one Tech II, one Ancillary. This combination provides both long-term steady tank with a burst of repping power near the beginning of an engagement. Next is the resist profile, which is created by two Energized Adaptive Nano Membranes and a Reactive Armor Hardener. With the reactive to adjust the resist profile as needed for incoming damage, I felt a dedicated explosive plug would be redundant. I chose the second EANM over a Damage Control as with the Armored Command boost the fit was already geared heavy to armor so the additional resistance there would be more useful than a broader profile. The last slot is occupied by a Tracking Enhancer II. With the double bonus to damage from the hull, I felt it was best to provide some additional application rather than more raw damage.

Rigs (3): The rig slots are identical to my other active armor fits, as the combination helps improve the tank capabilities greatly. First is the Medium Auxiliary Nano Pump, which improves the repair output of the reppers. Next is a Medium Nanobot Accelerator, which decreases the cycle time of the repairs. Last is a Medium Ancillary Current Router, which provides the remaining power grid to have everything active and ready to go.

Drones (40 m3, 40 Mbit Bandwidth): Rather than utilize the drone bay for additional DPS, I chose to help make up for the lack of a web in the mid slots. To do this, I packed four SW-600 Stasis Web drones. I will wait here while you run to the comments to roast me.

Bling: There really isn’t a place I would recommend adding bling. The ship’s bonuses don’t really lend it to dramatic improvements by adding Faction or Deadspace mods. If you want to spend more money on the ship the armor reppers would not be a bad place to start.

Implants: As with Bling, I don’t feel implants are strictly necessary here. If you have a set of implants for helping with armor reps, such as an Alkispacian set, they would find use here.

I chose the Hurricane here mainly due to a desire to fly the ship, but also because I had just finished training for its big brother, the Sleipnir. This meant that I could take full advantage of the hull bonuses. Given my comfort with brawling ships and the way I had fit it, I planned on using this fit like a slightly more mobile browsing battleship.

As with all plans, this one did not last very long. I was fortunate enough to have two copies of this fit to test out and both met untimely ends. The first roam I met a small gang anchored by a Harbinger. I was able to get through a gate after getting a fraction of them to aggress me. The Harbinger followed me though and started to engage. I thought I would be able to give him a run for his money with how fast the Harbinger was dying, but I was dying faster. Turns out the Harbinger was using Polarized guns, and I melted.

The second ship met an even more hilarious end. While out attempting to find something to fight, a Legion caught me on a gate. I decided to fight back, as I did not see a good way out. I started chipping away at the Legion’s armor and had made a small dent in it before the Covert Cynosural Field showed up on my overview. This was followed closely by a Widow and a Sin. The Widow jammed me out and I spend the rest of the time laughing about the amount of overkill brought in for my poor little Hurricane as it blew up.

After playing around with this fit, if I were to take a Hurricane out again I would likely start from a different place than here. While this fit did some interesting things on paper, those things did not help it perform in actual testing and might have hampered it from doing a little better. I will call out the Armored Command Boost here specifically, as I had to make some fitting sacrifices to make it work. While I am sure there is a scenario where a command burst is a viable solo tool, this fit does not seem to be the place. In addition, the webbing drones lived up to their common usefulness and did nothing effective. Having some DPS drones might have made the engagements I did have a little more interesting.

While it didn’t work as intended, I learned quite a bit from taking the Hurricane out to play. I hope you enjoyed reading about my failings and that I’ve inspired you to get out and try something different on occasion. Until next time.