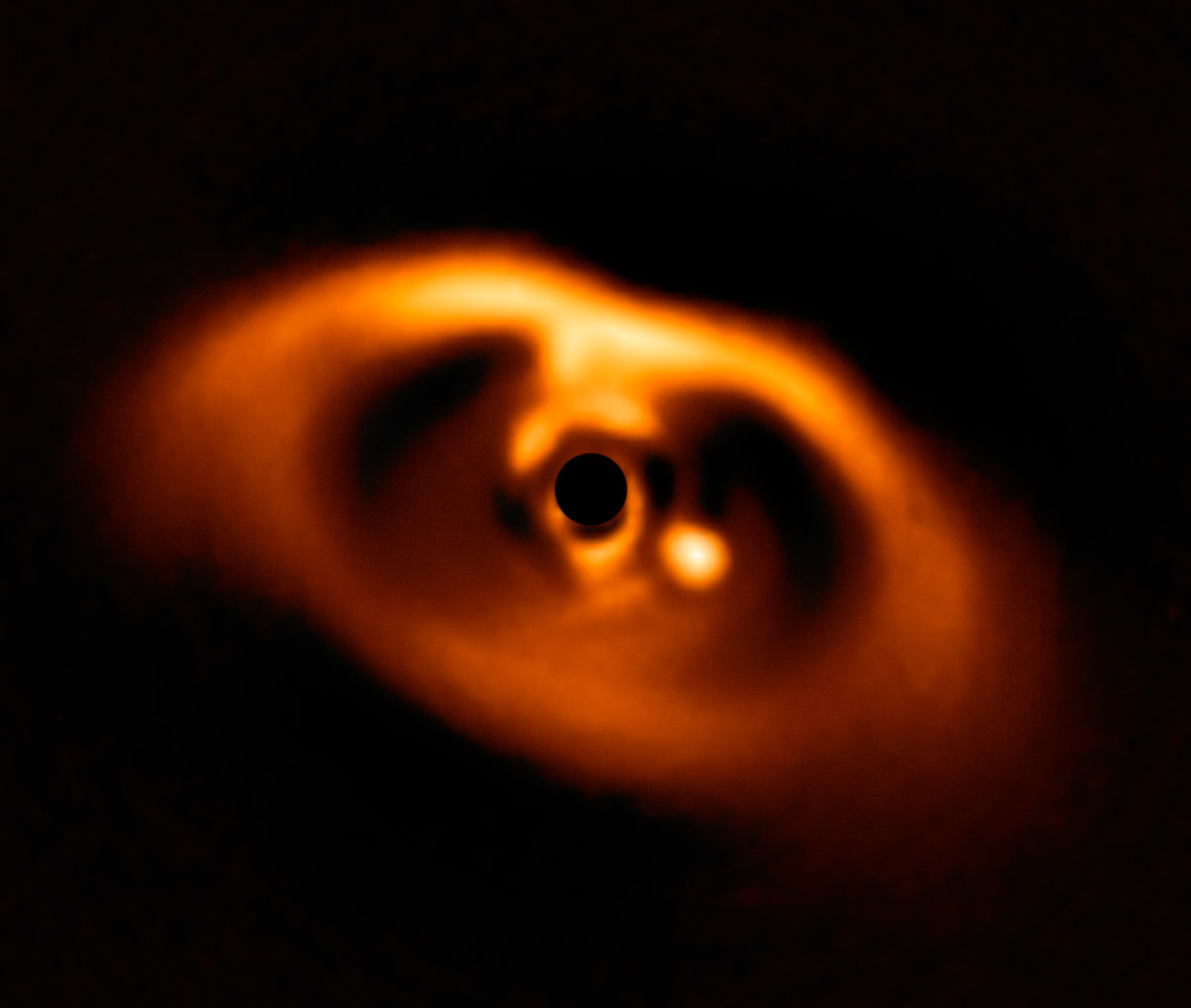 Its been a busy month spacefans,  the now finished Cassini mission continues to deliver, we celebrate the birth of a cute baby planet, and there are some treats ahead if you like gazing at the sky!

We already know that organic molecules had been discovered by Cassini as it dived repeatedly through the little moon’s plumes. However, by going over the data in more detail, scientists have discovered far more large, complex molecules which are hard to find beyond our own planet and makes it more likely that it could be a suitable habitat for life. Deep hydrothermal vents like we have here on Earth churn together materials from the moon’s  huge subsurface ocean and its warm porous core, which it then releases into space via cracks such as its famous ‘Tiger stripes’, in the form of water vapor and ice grains.

A  science team led by Frank Postberg and Nozair Khawaja of the University of Heidelberg, Germany, is continuing the study of the the makeup of this ejected material and has recently identified fragments of large, complex organic molecules. The process that create these molecules are the same as processes here on Earth and particularly reminiscent of processes on the young Earth, a kind of biotic soup beloved of evolutionary scientists everywhere. 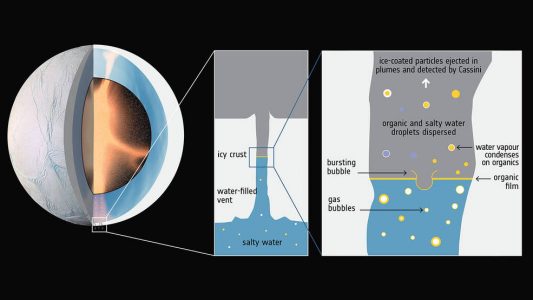 “In my opinion, the fragments we found are of hydrothermal origin; in the high pressures and warm temperatures we expect there, it is possible that complex organic molecules can arise,” Postberg said.“Our results mark the first ever detection of complex organics coming from an extraterrestrial water world.”

Postberg added that with modern instrumentation it would be straightforward to check Enceladus for signs of life. “You don’t have to land or drill, you just fly past,” he said. “This is not science fiction. You can just go there and check: is there life or not?”

“Liquid water, a source of energy and organic molecules are required to support life as we know it. We now know that Enceladus’s ocean has all of these ingredients, today,” said Christopher Glein, a space scientist on the study at Southwest Research Institute in Texas. “Besides Earth, no other place in the solar system has confirmed evidence of all three requirements in a contemporary environment that can support life. What’s even more exciting is that this habitable environment on Enceladus is readily accessible via the plume. It’s a potential gold mine for astrobiology.”

Despite Cassini having dived to its demise into the atmosphere of Saturn last year, the mission still delivers amazing science. As I have said before: we really need to go back!

The Curiosity rover has previously found signs of ancient habitability on Mars. While not signs of life as such, they have been very promising and clear road signs for where to look next for future missions. Now another finding comes regarding the previously elusive signatures of methane on Mars. They are not in fact a fiction of our imaginations, but are seemingly seasonal.

“Most humans, as we crawled down from trees, have wondered about, ‘Are we alone? Are we the only life form?’” says Mike Mumma, a planetary scientist at NASA’s Goddard Space Flight Center, who’s studied methane on Mars and was not part of recent research. “If we can identify whether on Mars this methane has originated from life, that would be one way of answering that question.”

Its not yet known as to the mechanism this methane is produced, however it is a strong biosignature. The jury is so far out on is it ‘aliens’ or natural geological processes. The clincher may well be when the ExoMars Orbiter starts to tell us its findings, seeing as that’s what we sent it there to do!

We have naturally know that planets are born, but catching one at the moment of birth has hitherto been elusive. This has now changed with the happy announcement of a baby exoplanet found in its nest of gas and dust around its young dwarf star, PDS 70. PDS 70 is about 5.4 million years old and lies 370 light-years from Earth. These data were gathered by two instruments on the European Southern Observatory’s Very Large Telescope (VLT) in Chile, including the SPHERE planet hunter, and one instrument at Hawaii’s Gemini Observatory. The infant planet will grow up to be a gas giant. The SPHERE instrument also enabled the science team to obtain data as to its atmospheric properties.

“These disks around young stars are the birthplaces of planets, but so far only a handful of observations have detected hints of baby planets in them,” discovery leader Miriam Keppler, of the Max Planck Institute for Astronomy in Heidelberg, Germany, said in a statement. “The problem is that, until now, most of these planet candidates could just have been features in the disk.”

The baby planet is currently very hot at about 1000C. It lies at about the same distance Uranus does from the Sun and has a year of about 118 days. The high temperature is in line with what we know about baby gas giants. Jupiter, in fact, emits more heat than it absorbs from the Sun even after 4.5 billion years.

The ‘black hole’ you see in the middle of the image is a coronagraph. It’s used to mask the sun’s brightness in order to see its surrounding protoplanetary disc. Many pictures are taken over a long period of time and then put together to see the image.

“These discs around young stars are the birthplaces of planets, but so far only a handful of observations have detected hints of baby planets in them,” explains Keppler. “The problem is that until now, most of these planet candidates could just have been features in the disc. We’ve taken images at various different dates, used different algorithms, different wavelengths of light,” says Keppler. “If it was an anomaly we would not have detected it in such a consistent way”

André Müller is the leader of the second team to investigate the young planet. “Keppler’s results give us a new window onto the complex and poorly-understood early stages of planetary evolution,” Miller commented.  “We needed to observe a planet in a young star’s disc to really understand the processes behind planet formation.” By determining the planet’s atmospheric and physical properties, the astronomers are able to test theoretical models of planet formation.

The team plans on keeping up their observations in order to gain more data into planetary formation.

Red Skies: MARS CLOSEST SINCE 2003 AND A LUNAR ECLIPSE

I remember the last time Mars was this close. In 2003, I was in Scotland with very clear skies and it was amazingly bright. It was the closest it’s been in 60,000 years. So you can bet I spent time peering at it at every opportunity! It won’t be quite as close this time, 57.6 million km away as opposed to 56 million km. However, it will be 10 times brighter than usual. You’ll find it the South eastern sky from late July to the beginning of August. It will not be as huge as the Moon, despite the Facebook hoaxes. But it will be that bright red ‘star’.

And on July 27, observers in Africa, the Middle East, southern Asia and the Indian Ocean will see a total eclipse lasting an amazing 1 hour and 43 minutes. (Observers in North America, who will still be in daylight at that time, will need to watch the show on webcasts.) The partial eclipse may well turn the Moon red. Remember. though, it’s the Moon, not Mars. Damn those Facebook hoaxes!

That’s all for this time spacefans!