It’s been another busy month spacefans. After last month’s revelations around Enceladus, which never fails to entertain, Mars has of course provide even more fun news and where the heck is our new space telescope?

While you can’t describe it as an ocean, this latest discovery is however very relevant astrobiologically. The lake is more akin to subsurface lakes that we know to exist in Antarctica and Greenland.The new finding is based on data from the European Mars Express spacecraft, obtained by a radar instrument called MARSIS (Mars Advanced Radar for Subsurface and Ionosphere Sounding). The Italian Space Agency (ASI) led the development of the MARSIS radar. The paper, authored by the Italian MARSIS team, outlines how a “bright spot” was detected in radar signals about 1.5 kilometers below the surface of the ice cap in the Planum Australe region at the red planet’s South pole. This strong radar reading shows a strong signal interpreted by the study’s authors as liquid water, which as we know is one of the most important ingredients for life as we know it in the Universe. 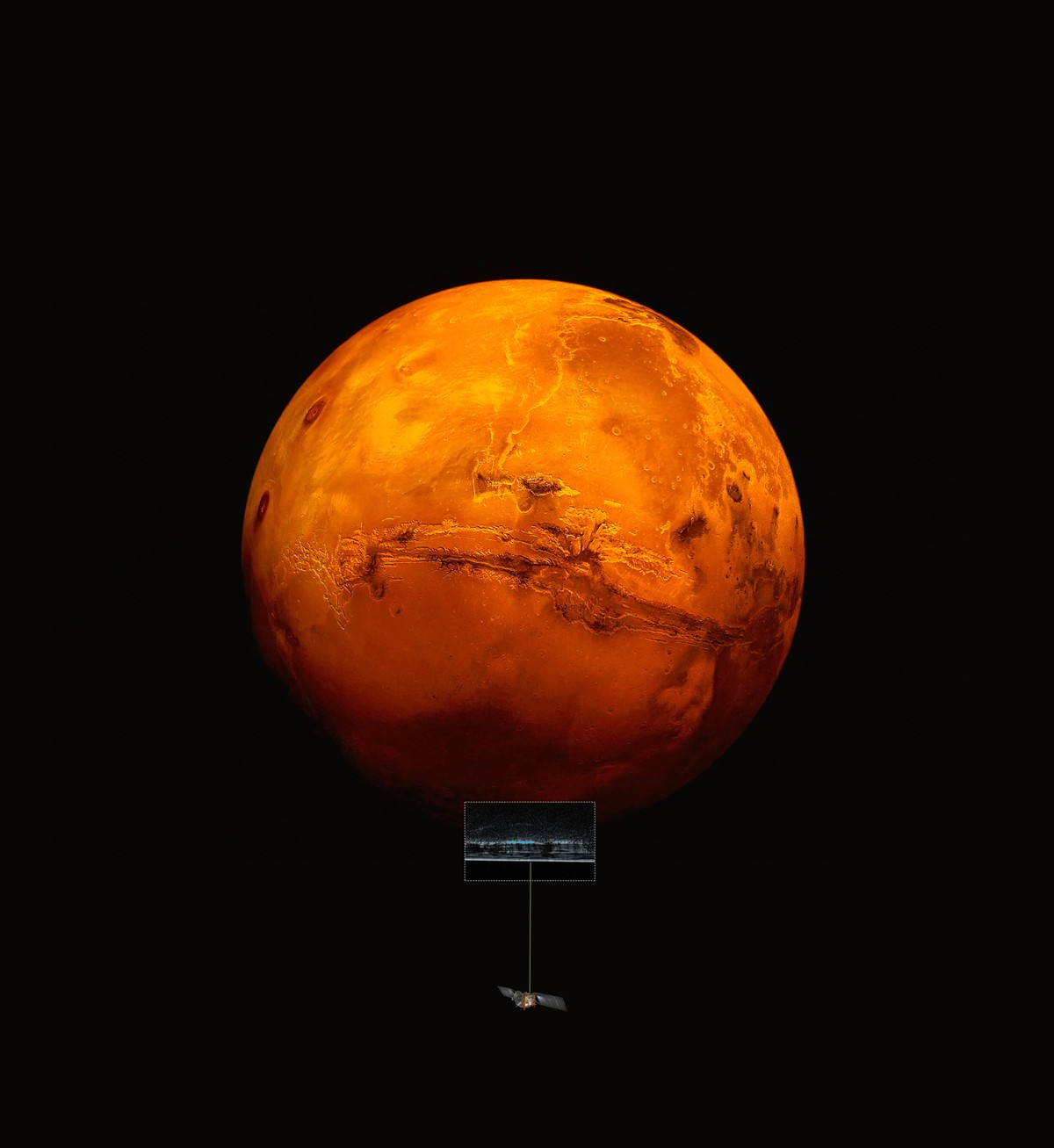 “Water is considered one of the fundamental requirements for life. This is the first stable body of liquid water ever found on Mars, and it could be considered a potential habitat,” explained Roberto Orosei, a lead scientist at the Institute of Radioastronomy in Italy who analyzed the data. “We found, in fact, that any other explanation for the very strong [radar] echoes were not very tenable in light of the evidence that we had available. So we had to conclude that there is water on Mars, today,”.

“The bright spot seen in the MARSIS data is an unusual feature and extremely intriguing,” said Jim Green, NASA’s chief scientist. “It definitely warrants further study. Additional lines of evidence should be pursued to test the interpretation. We hope to use other instruments to study it further in the future,” Green added.

The evidence of liquid water on the surface of Mars is writ large in its rock history as you don’t get certain types of sediments without the presence of the stuff in sufficient quantities. The debate over current liquid surface water still rages despite the compelling evidence, but scientists like an argument every bit as much as anyone else after all. Water under the surface I don’t find remotely surprising and frankly just a matter of time, based on having the right tools in place to see it. I would also be amazed if this turns out to be the only one we find.

The lake in question will be extremely cold by Earth standards, between -10 to -76C, however salts can keep the freezing point at a much much lower level in the form of brines that even here allows organisms to survive. Many more observations needs to be completed in order to confirm that the lake is indeed liquid water, the science team have said, and cureently we have no way of knowing if life exits in the lake.

“Getting to the reservoir and acquiring the final evidence that this is indeed a lake will not be an easy task. It will require flying a robot there, which is capable of drilling through 1.5 kilometers of ice. And this will certainly require some technological developments that, at the moment, are not available,” Orosei said. “A single body of water could be a quirk of nature, but the existence of many lakes would indicate that subglacial water is a common occurrence, and that could mean that liquid water was present on Mars throughout most of its geological history,” he said. “This finding would have profound implications on the potential biological evolution of the planet.”

TESS, NASA’s Transiting Exoplanet Survey Satellite, commenced it’s mission on July 26th 2018 and will begin transmitting data this month and every couple of weeks from then when it’s at its closest to Earth in it’s orbit. You can bet on how excited I am to see its first findings!

“TESS, the Transiting Exoplanet Survey Satellite, is NASA’s newest exoplanet mission. Led by MIT, TESS will find thousands of new planets orbiting nearby stars. During its two year survey, TESS will watch a wide variety of stars, looking for signs of planets ranging from Earth-size to larger than Jupiter. Each of TESS’s cameras has a 16.8-megapixel sensor covering a square 24 degrees wide — large enough to contain an entire constellation. TESS has four of these cameras arranged to view a long strip of the sky called an observation sector. TESS will watch each observation sector for about 27 days before rotating to the next. It will cover the southern sky in its first year, and then begin scanning the north. TESS will study 85 percent of the sky — an area 350 times greater than what NASA’s Kepler mission first observed — making TESS the first exoplanet mission to survey nearly the entire sky. Because TESS’s observation sectors overlap, it will have an area near the pole under constant observation. This region is easily monitored by the James Webb Space Telescope, which allows the two missions to work together to first find, and then carefully study exoplanets.”

TESS is designed to work hand in hand with the yet again delayed James Webb Space Telescope mission I will get to shortly, however it’s still awesome that this amazing spacecraft will still be observing the sky until its big brother arrives to look more closely at whatever wonders it finds.

“I’m thrilled that our new planet hunter mission is ready to start scouring our solar system’s neighborhood for new worlds,” said Paul Hertz, NASA Astrophysics division director at Headquarters, Washington. “Now that we know there are more planets than stars in our universe, I look forward to the strange, fantastic worlds we’re bound to discover.”

This part of my column takes us neatly to the next, so hang fire spacefans!

We have been waiting and waiting for this Hubble upgrade for what seems like forever it seems. This is one of the most brilliant, difficult and seemingly impossibly complex missions, that not just NASA, the European and Canadian Space agencies, but anyone has ever undertaken in the history of science. In essence they HAVE to get this right as it’s SO F*CKING important a mission, a once in a lifetime mission, a mission you really don’t want to go wrong.

The James Webb Space Telescope is one the most ambitious, and technically complex missions NASA has ever set its focus on. Building an infrared observatory of this magnitude, power and complexity has never been attempted before. In order to ensure seamless operation in space, the cutting-edge technology incorporated into Webb must be rigorously tested prior to launch.

It’s understandable that with such new technology that you’d want to ensure that it’s spaceworthy!

“When we first thought of Webb, it wasn’t technically feasible. We had to succeed at inventing some things before we could build it—not unlike the Apollo Program in this regard,” said Paul Geithner, Deputy Project Manager – Technical at NASA’s Goddard Space Flight Center in Greenbelt, Maryland. “From an engineering perspective, Webb is extraordinarily difficult. The science means it has to be big, in space, and half of it has to be super cold.  This means we had to design it to fold up for the ride into space, then have it unfold flawlessly by remote control.  It also requires that we build the cold optics part exactly wrong, in gravity and air at room temperature, so that it will be exactly right—the right size and shape—when it’s weightless in the vacuum of space operating at temperatures so cold that air turns solid”

Getting this thing into the sky has taken longer than it should have because the science teams were quite often inventing the science they needed as they went along, thus requiring extra testing as well. I’m sure I’d prefer they did that than Leroy the thing into orbit before its ready!

For those of you with access to dark skies, please go outside and enjoy the Perseid meteor showers which will be at their best over the next couple of weeks. I hope that those who could see the Lunar eclipse last Friday enjoyed it unlike yours truly who saw nothing but rain clouds for the first time in what felt like years *sigh*. Mars and Saturn are still very bright as is Venus. If you don’t have the Google Sky app, just get it, its free! If you have a telescope, Mars is bright, but currently covered in a dust storm I’m afraid.