Last night, Guardians Of The Galaxy was struck a blow with the loss of two titans, one of which was piloted by Sort Dragon, and a super for over 230B ISK of damage. A collection of dreads and Apostles were also lost. The fighting took place on a regional gate in Venal: WLF-D3 going into DKUK, a regional gate that otherwise takes three jumps to reach, and a prime location for the Imperium interception of the GOTG move op. 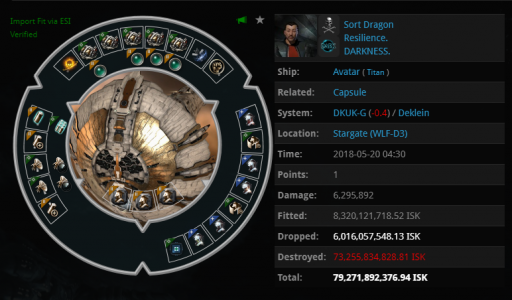 For more details, we spoke to two of the Imperium FCs that were at the battle, and who have put the recent events into their own words.

INN: Thank you for your time, the news has broken that Sort lost his titan, as well as Vikysya in an Erebus and an Aeon as well. or those who were not there, care to tell us what lead to this moment?

Asher Elias: The USTZ group of SIGs and squads from the Imperium moved from Pure Blind to Venal and started hitting Sort Dragon’s renters in Branch. In response, Sort Dragon decamped his entire alliance and moved them from D06H in Fade to WLF in Venal (where they have a Keepstar). You more or less have to take a gate from DKUK in Deklein to WLF in Venal. This was a move op, and we had a trap laid out to catch them as they jumped through that gate.

INN: I saw that the fighting was on the same grid as the Keepstar, was that decided to stop them from jumping in the support on top of the trapped supers.

Asher: It certainly helped, we were able to keep a catch bubble up the whole time so they couldn’t warp directly onto us.

INN: I’ve just checked Dotlan. Due to the distance, if you wanted to avoid taking that gate, you would have to take three jumps to go around to get from WLF to DKUK.

Asher: Yeah. It’s a big pain, so most everyone takes the gate.

INN: Do you think that this will result in a change, between the reduction of timers now making it faster and the damage that was dealt today?

Asher: What sort of change?

INN: Avoiding using that gate and jumping around instead.

Asher: Oh, well they’ve moved most of their ships already; this was the tail end of the move op. I’m sure they’ll be more concerned now for sure.

INN: Being the tail end, do you think they were getting lazy or tired and were taking more risks? There were no signs of any support fleets.

Asher: The last move ops just had fewer ships. The same thing happens in every alliance. No one gets hyped up to guard a move op.

INN: Is there anything else you would like to add?

Asher: Just that the emblematic nature of killing the actual leader of the alliance as his fleet impotently shoots a couple dreads on the other side of the gate while letting him die isn’t lost on me.

We also reached out to Apple Pear for another perspective on the fight.

INN: Thank you for your time. Care to tell us what lead to this moment?

Apple Pear: Asher called for a fleet to reinforce some structures. But that was not the only goal. We had some dictors logged off on the DKUK gate in WLF, and a titan logged of in a system in Venal. Since we knew GOTG have been moving caps and supers during the day, we saw them forming a small moveop and we were hoping to catch some.

When they jumped the gate to WLF, we logged in the dictors and lit the cyno. Boat jumped in a dread and lit another cyno, and we got our dreads and Ishtars in, started killing the bus, and later the Aeon. Also killed some normal caps.

Boat also had a dictor, so he went into DKUK and bubbled the gate to make sure their reinforcements couldn’t arrive. During that time, Sort warped his titan down and hit the edge of the bubble. We got him tackled and jumped as many dreads through the gate as possible and killed him. We then extracted most of our dreads.

Asher was the FC for the fleet, DBRB and Kun’mi had the dictors on the gate, and DBRB jumped in the first dread we had to a hardened cyno. I was backseat FC for the Ishtars and also had a dread there myself. Sadly, I died in my dread just before I could jump to DKUK.

INN: I saw that Sort was in that bubble for five mins before Tackle arrived.

Apple: The Ishtars that jumped first bumped his titan so he couldn’t warp, and he couldn’t get to the gate.

INN: I see, thanks. From the Imperium side, there were a lot of big names working together to get results, while some alliances can’t have two FC in the same server room.

Apple Pear: Working together is the only way to get things done. Thomas Lear was there also to target call for the dreads. Zed did target calling for Ishtars mostly. If you want great results, you can’t do it alone

INN: Is there anything else you would like to add?

Apple: Nothing really. My next step is continue to have fun, the last few months (almost half a year now) has been one of the most fun times for me in Eve.