An XIX move-op seems to have gone horribly wrong in the system of C-LTXS in Wicked Creek.  Fighting has broken out between XIX and FRT (Supported by TRI). TEST are en-route from ERVK to support XIX and Goons are heading down to third-party.

At present there are 1600 in local, with FRT slightly ahead in the ISK war. Early battle reports show 213b lost by XIX, with FRT losing 185B so far. FRT have lost a Erebus whilst the majority of XIX losses are Dreads so far.

INN’s DBRB is streaming on INN Twitch, and we will update this article as we get more information.

1810: Waiting for Zkill to update, but it seems another Ragnarok and an Avatar have exploded

1815 PL and NC are on field supporting FRT. 2nd Ragnarok kill is now on Zkill

1830 Lastest BR shows 700B lost by XIX  and 300b lost by FRT, so 1T total this fight so far. Tidi is at max. As this was a surprise fight, the node is not reinforced, and Boat is taking 10+ minutes to cross a system with his fleet. It is worth noting the Hel values are higher than usual due to it being a moveop and the ships being ratting fit.

1846: Correction: Boat is slowly jumping through the gate into C-L.

1852: Boat has not loaded into the system. TEST are apparently shooting at Goons coming into the system. Boat has announced a new tool, NGSA, which will be coming online in the next few days. This a tool for use in Deklein.

1855: Boat is still stuck in the tunnel. 18 Hels are dead. Zkill is now not loading battle reports.

1859:Boat has finally loaded into the system, just as XIX titans begin leaving the system.

1901: Boat and his fleet are engaging TRI. It seems that XIX have successfully moved most of their titans out.

1915: The server is struggling, with several streamers having client crash issues, and fleets reporting client issues as well.

1918: NC. seem to have cyno’d in SNUFF to join in clearing up the leftover XIX titans. At this point, everyone is just trying to get on the titan kills.

1920: Any supers and titans who havent cyno’d out are likely to explode.

1925: Boat is now shooting at Titans with his fleet. Tidi explosions are happening.

1926: Erebus down. This brings the total titans lost to 5, with more to die shortly.

1928: In the most exciting development for some time, DBRB has gone to wrap ribs in tinfoil. In the meantime, command comms is explaining why max tidi fights are fun.

1930: XIX continue to lose supers, another Nyx is down. This is currently over 2T in losses, with the vast majority from XIX.

1932: Boat is back. The ribs are succulent. He has put them in apple juice and wrapped them in tinfoil. In battle related news, 21 supers and 5 titans are down.

1933: Titans are dropping faster than freighters during Burn Jita. NC are on their way with Sabres to bubble all the things.

1935: Disaster….Boat may have crashed his client. He made the error of trying to change effects during TiDi.

1936: Moomin and Apple Pear are keeping us entertained while Boat is trying to find out if he has crashed or not.

1937: Boat has crashed. Boat is slowly reloading his client.  There are socket closures on both sides of the fight. Pilots who reconnect and are unsure about what to F1 at should not panic, normal service will resume shortly once FCs can reconnect.

1939: When doing a moveop, moving all your cap BPOs and BPCs in your dreadnought can be a risky move, as this pilot found out. 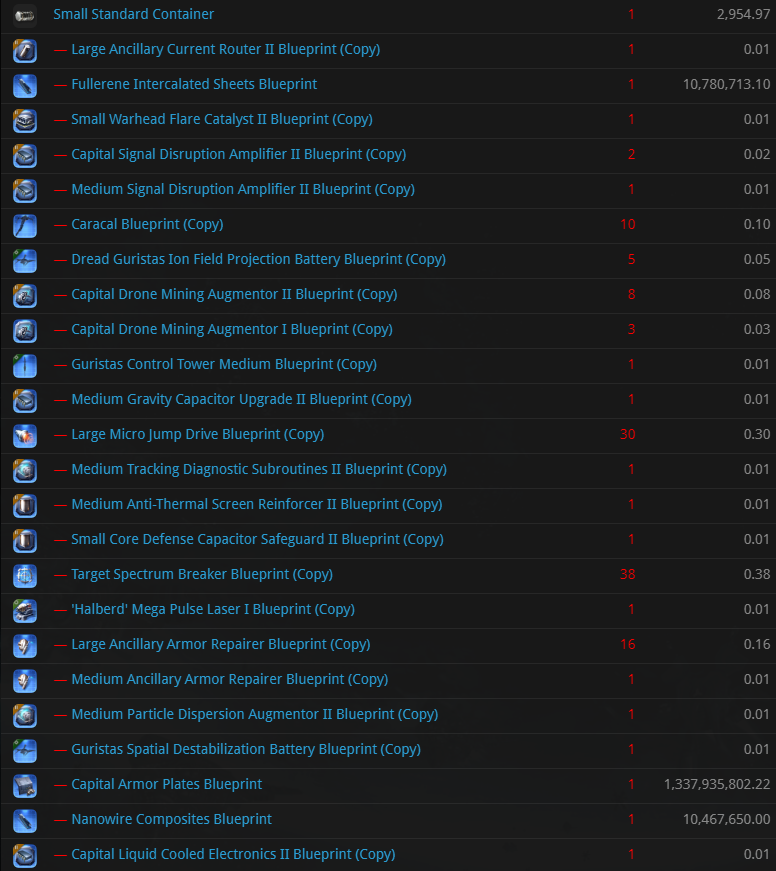 1942: Boat is loading grid! Boats ribs have been smoking for 3 hours, with applewood and hickory.

1945: Titans continue to die. It seems XIX planned to cyno onto a gate. This decision is causing a lot of confusion among the commentators.

1951: We are attempting to get a proper battle report, but the sites are somewhat struggling with all the dead titans and supers, especially those with all their worldly possessions in them.

1953: Boat has managed to lock something….for not long enough to shoot at something. The 8th titan is about to die. Boat may miss out on this killmail.

1956: Boat has relocked the Avatar. He is having issues with the ribs. The temperature in the oven keeps rising too high.

1958: Kcolor has explained over on reddit why XIX were doing what they did. A fleet member has reported the tidi as soul crushing.

1959: Ribs are ok. The temperature has recovered to 210F, but it is not stable.  Apparently 210F is the optimal temperature for ribs. Apple juice and apple cider vinegar have been added to the ribs while they are in the oven.

2000: Titans continue to explode. Zkill continues to have issues, so we are unable to link further updates. We can now update you that apple juice is now properly added to the ribs. Now that ribs are safe, titan killing can continue.

2005: I was incorrect. Boat is not using an oven, he is using an electric smoker. He has two trays full of ribs that have been dry rubbed, then sat in the fridge for a day. They came up to room temperature, and smoked for 3 hours. They have been in tinfoil for an hour, and now he has added apple juice. The recipe is a Boat family recipe.

2007: Any enterprising pilots who wish to try their luck at salvaging should make their way to the system to try loot the field.

2010: Although this is a large loss for XIX, it is not insurmountable, so, while it is going to take some time to rebuild the lost ships, it is not something that they cannot recover from.

2012: Supers, dreads and titans continue to drop. Zkill has total losses at 2.5T at the moment, but the values are somewhat delayed.

2014: As I was just asked in discord, Asakai was around 700b, B-5RB was 11T. There have been 1T loss fights recently, but what makes this one stand out is the bizarre way in which it happened. It is not often a moveop fails so spectacularly. It is also unfortunate for XIX that their new coalition-mates TEST did not commit their supers to save them. That may have changed the outcome of the battle, or killed the servers.

2020: It seems that there are no more titans to die. Supers and dreads are now being mopped up. This looks to be the last Titan to die on field today: 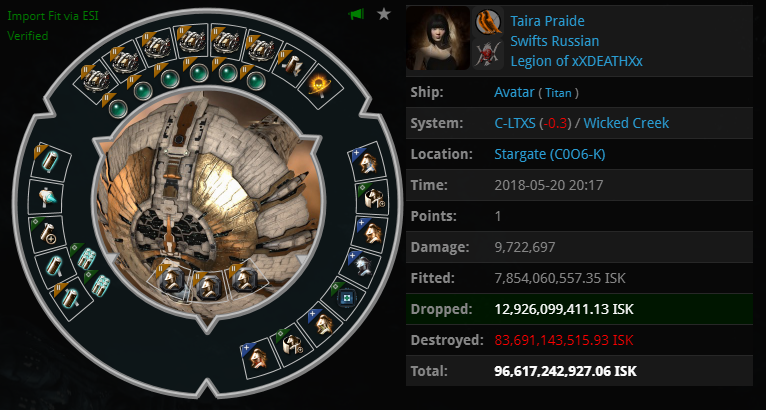 2025: The last Super has now died.  Boat is going to continue to kill dreads.

2031: The fight is all but over now, Boat is trying to kill Elise Randolph, but he will probably scoot out of range. He is working his way through the PL FCs who are on grid.

2040: Elise Randolph is still on grid. His Ferox is determined to stay alive.

2047: Boat has an hour to go on the ribs. He continues to chase the PL FCs as they skillfully warp away from the fight.

The fight is over now, analysis will come over the next few days. The final total seems to be 8 Titans, 18 Hels, and assorted supers and a whole load of dreads. 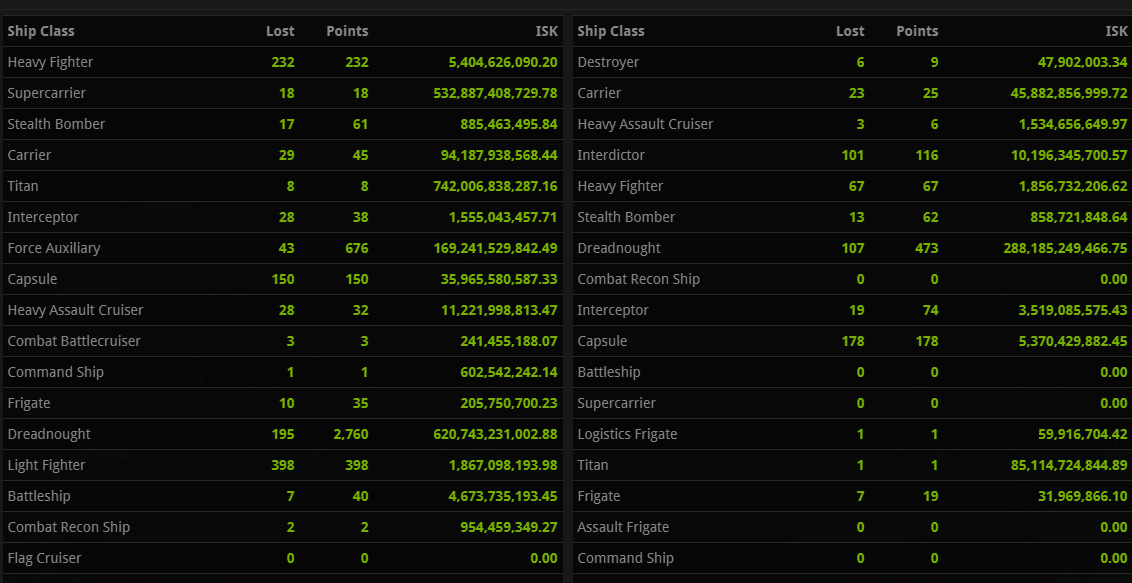 It will have to be seen how XIX recover from this, and how their relationship with their new coalition mates is after this. Whether Legacy should have jumped in and committed their superfleet (Which was formed and ready to go), or not is something that will no doubt be discussed for some time. The main lesson to take away from both this massive fight, and the losses elsewhere this weekend is that you should always make sure your moveops are carefully coordinated to avoid any unexpected visitors.

There will be a final update for the blog as soon as we receive images of the ribs.

Update (not ribs): There is a somewhat sorted out BR available here. Everyone piling in to get on the killmails has made it a mess to get everyone lined up, and Zkill is still having problems loading things through.

UPDATE: We have pictures of the ribs! We can now close the liveblog! 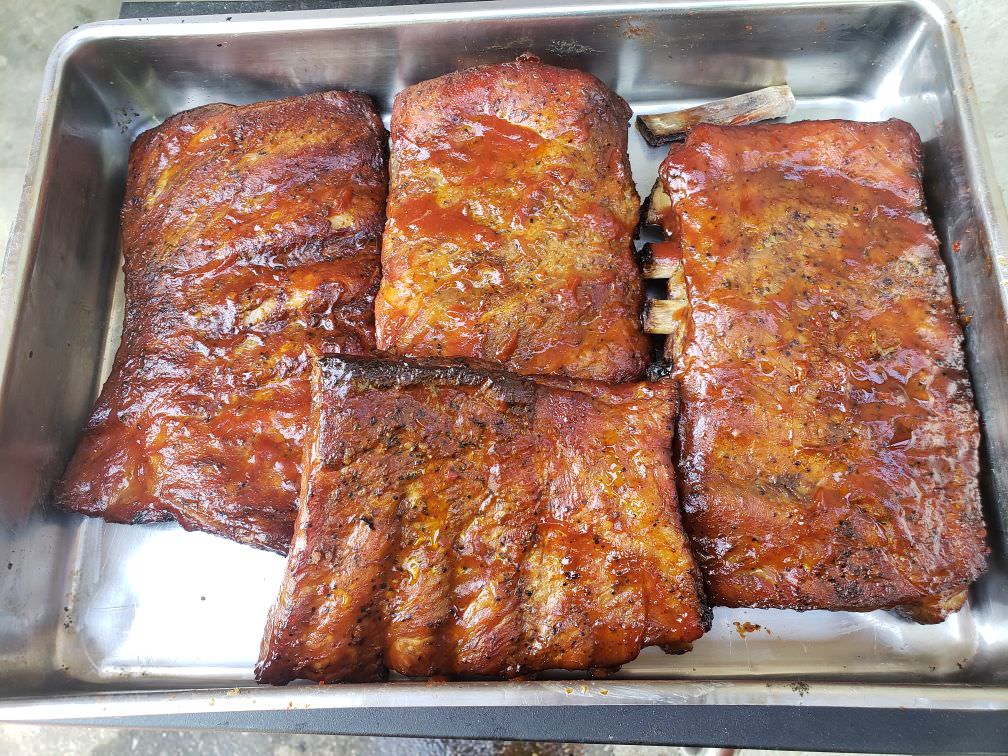