Jeff Edwards is a well respected, award winning, best selling author, and he is taking an incredible risk both for his career and his reputation to tell a story about EVE. Authors of Jeff’s caliber run in small circles. It’s why he’s been endorsed by fellow authors Greg Bear, Pierce Brown, Vernor Vinge, Graham Brown, Dirk Cussler, and others. These credentials, his dedication, and his passion are why we are excited to bring him and his talents to tell player stories in EVE, starting with The Fountain War.

The way our community collectively treats him as an author and as a person reflects upon all of us. Regardless of whether this Kickstarter succeeds or not, Jeff’s impression of us as a community matters and will persist.  So let’s look at some gems that our community has spewed forth:

Look at that filth. It doesn’t matter what you think of Mittani, goons, or this website. Treating a professional author with mean-spirited hate is a great way to ensure that EVE never, ever, gets a high caliber author. No one will want to deal with “that toxic EVE community.” And authors talk about their ongoing projects, so when his writer buddies ask him what happened, what sorts of stuff do you want Jeff to say? Is that actually the goal, to drive him and anyone else from the outside off?

This vitriol is not limited to Jeff. We saw the same hostility directed at the exceptionally popular and talented Scott Manley a few short days ago when he released a documentary on his channel that loosely supported the Fountain War Kickstarter project. Here’s the top comment on that, and some others:

Pretty great, right? Scott reached people in his audience that wouldn’t give EVE a second thought or had wandered off. He made them excited about what we do in our game and made it sound epic. Maybe he even pulled in some badly needed new players.

But he mentioned the Kickstarter. He mentioned goons. So let’s take a cruise over to /r/eve:

Scott, to his great credit, tried to engage people, but eventually responded with this:

To put this in perspective, the first item one of Scott’s non-EVE playing fans would have seen if they popped over to reddit all amped up and ready to subscribe from his video was /r/eve collectively shitting on him. That’s a truly enlightened way to win new people over and bring them into the game. Being newbie friendly means more than free frigates for people who subscribe, it’s an total attitude that makes prospective players excited to be in and engage with our existing community. Which makes /r/eve one of the least newbie friendly spots in our entire game, and all of you who collectively lower the level of discourse there share in that responsibility. 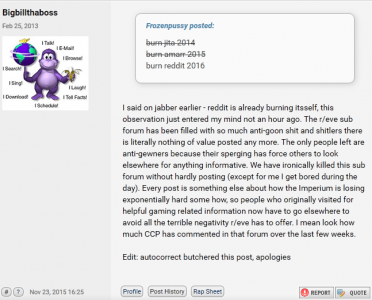 It’s tragic. Reddit isn’t just the people who actively post, it’s the lurkers, the people who make their way to /r/eve by way of people like Scott Manley who are looking to learn more about a game they want to try. It’s also home to a bunch of bitter, washed-up has-beens who may not even be subbed and who would like nothing more than for people to hate EVE as much as they do. When prospective new players hit that wall of toxicity and blind inchoate rage, it’s difficult to convince them of community being one of our game’s greatest strengths.

The sad part is that reddit has a lot of great people, and even /r/eve has some solid posters. But it’s bad enough now that even the institution of nosygamer recommends people don’t go there because it “can suck the enthusiasm for playing EVE out of a player faster than an officer fit Bhaalgorn can drain the capacitor from an Atron.“. You want a reasonable discussion? Better off going to FHC.
Grr goons rants are part of the game, and goons have thick skins and the masochism to revel in the abuse. But if you can’t distinguish between ‘grr goons’ and “fuck Scott Manley he talked about goons” or “Jeff Edwards writes garbage because goons,” then there is something seriously wrong with you.

Here’s what happens if the Kickstarter doesn’t get funded. First, we go back and examine what went wrong, why, and if there’s still a viable product that Jeff is willing to commit to. Then we try again, adjust our funding goal, adjust the backer rewards, and give everyone a post mortem on what happened. The tale of our missteps on the Kickstarter is a story of its own, and it’s something we’ll examine openly because our people deserve the best and we owe them an explanation.

Here’s what happens if the Kickstarter fails and the screeching minority drives Jeff and any other prospective authors off. CCP loses its ability to ever secure another author to write player stories. There’s no press about “book published featuring player stories,” no headlines about how EVE has yet again blurred the lines between our virtual universe and the real world. There are no follow-up stories. All those players who might have been pulled into the game by one of these vectors do not materialize. Remember “This is EVE” and how we could show that to non-players to show them why we play? There’s no book version of that to slap down and draw them into our world and there never will be.

It doesn’t matter what you think of the in-game Mittani. The real life Alex did something that nobody–not even CCP–has ever done. If the project doesn’t interest you, that’s fine too. Make no mistake though, if the community drives the Jeff Edwards’s and the Scott Manley’s off, our community as a whole is diminished. Our ability to grow our community is diminished. Jeff Edwards and Scott Manley are guilty of nothing more than wanting to tell a good story. We should be cheering them on, celebrating their ability to reach others with their passion for our virtual world.

Jeff has been doing online book tours, met thousands of people, and exchanged reams of information. He was at EVE Vegas handing out free signed copies of his other books. He’s a smart, patient, funny guy who would do our whole community proud if given the chance to record our stories. He’s certainly not Mittani, and the misplaced anger directed at a good man with good intentions horrifies me.

Moreover, let’s not pretend that any of this controversy is anything other than it is.

It’s not “Mittani is making money!” It isn’t just CCP that monetizes players, this is something you see fairly frequently across EVE. Rixx Javixx had a gofundme so that he could produce artwork that he’s partnered with CCP on and for which he presumably gets a cut. Sort Dragon’s gofundme for a new computer so he could keep leading fleets and delivering content had a similar result. Avalloc sells people Bees and Test paraphernalia. Markee Dragon, Mad Ani (who now streams Star Citizen), any website with ads (including CZ, EN24, and this one), server drives, selling IT help, FC’s getting accounts paid, workers for alliance interests getting PLEX, and more. The commonality here is that is that someone somewhere is making money. Where is the outrage over these self-interested charlatans?

No, that rage is saved for the guy who starts a project to get a first-of-its-kind book written. It’s saved for a guy who started a project with a real chance to have reach and impact beyond EVE, to bring in players and raise visibility. When I initially heard about the Kickstarter idea from Mittani, the first words out of his mouth were not, “I’ve thought of a great way to scrape a tiny percentage of money from a bestselling author’s fees after CCP’s royalties.” His first words were, “I found a new way to try to bring more people to EVE.” That’s right. For the good of the game.

It’s not “the story will be biased!” Sapporo Jones, leader of TEST alliance and on the opposite side of war, is just as excited about this project as Mittani is and is just as eager to have this stocked on bookshelves as anyone. A propaganda book isn’t an interesting book, and an author isn’t going to risk their reputation for a virtual space empire. Story submissions have been open since day one.

The reality behind the incoherent rage is: “I hate Mittani and will do or say anything to see him fail.” The thinly disguised rationalizations do nothing to hide the hypocrisy. 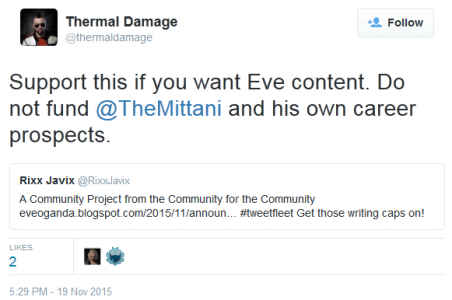 I’m appalled to see the loud cheering, the senseless collateral damage, and the lengths to which people will go to try to sink this Kickstarter. The argument I’ve yet to hear articulated is that a book about real stories will be bad for EVE. Much to my disappointment, all I see is what Matterall articulated so well already.

Regardless of what you think of goons, we would never engage in this kind of deplorable behavior. If Bobmon, Xander, Elise, or anybody else lined up a top-notch author to tell EVE stories, this website and our respective alliances would support it fully. We would never engage in wholescale self-destructive behavior to carry our space grudges because we aren’t frothing idiots. EN24, to their credit, did support us. Grath Telkin of Pandemic Legion gave the best interview I’ve ever seen to support this. Kira Tsukimoto, Sapporo Jones, Mynxee, Sort Dragon,  Vily, Corebloodbrothers, and many others have all said kind words even after it was clear we botched the rewards and that we had made missteps. Supporting voices are quieter now, in part due to mistakes made on our end, and in part due to the loud, angry, internet rabble. But there are definitely those who understand the potential value this project represents for our entire community.

If you don’t believe in it, don’t think Jeff is the right man for the job, think the goal is wrong, or think the rewards are stupid, by all means.

But allowing the blind hatred of one man to hurt our whole community is reprehensible. Even if you don’t fund the Kickstarter, don’t drive off Jeff Edwards. Don’t drive off Scott Manley. Don’t drive off the legions of anonymous drop-ins who check out /r/eve to see what our game is all about.

Because you know what? That hurts us all. And you know what else? Mittani will still be here, with the thousands of swarm brethren and the black ships of the Imperial Armada at his back. Your impotent /r/eve badposts won’t save you from the wrath of our guns any more this time around than it did any of the others.

Don’t drive these people off. Not because Goonswarm needs them.

Don’t drive them off, because you’ll need as many of them as you can get to have any hope at all of standing against the man you so hate.

The future of EVE Online is about more than the petty grudges of a vocal minority who no longer play the game. They have no stake in future successes, no stake in expansion, no stake in continuing to make this the best MMO community. What we have is special, and it’s past time we refused to allow them to speak as if they represented our community at all, let alone our entire community.