High Sec gankers have been raking in the loot this week! Gankers tend to get excited about catching jump freighters. There’s a good chance that they’ll be packed full of expensive cargo, and a 50/50 chance they’ll be badly fit. It turns out that both of our ALODs today can tick those boxes to some degree or another. Let’s have a look! 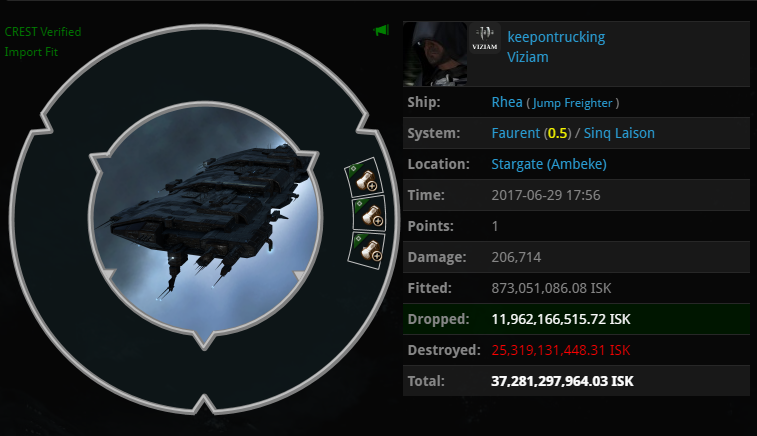 Oh man. One thing that makes jump freighter ganks so special is that the jump freighter itself is so expensive. At the time that this Rhea was killed, its hull was worth 8.2 billion ISK. That’s more ISK than some high sec miners will ever see in their entire EVE career. That’s not the worst of it however, as the kill wound up totaling 37 billion ISK. As we mentioned before, jump freighters are often badly fit and this one is no exception.

In an effort to stuff as much junk into the freighter as possible, keepontrucking fit his Rhea with Expanded Cargoholds. ORE Expanded Cargoholds. Any New Order Agent worth their salt would’ve been obligated to smash this thing based on that alone. With somewhere around 27 billion in the tank, this Rhea seems to have made an attractive target. As a parting gift, the exploding Rhea rewarded the gankers with an 11.9 billion ISK loot drop. With a couple of expensive BPCs in there, it’s likely well over 12 billion ISK in total. Not bad at all!

This gank does raise some red flags though, which we would be remiss in not mentioning. Firstly, keepontrucking has a bit of a suspicious employment history through June. He bounced from corp to corp throughout the month, landed himself in an NPC corp on the 29th, and promptly got blown up. Secondly, the jump freighter had plenty of fuel left in the fuel bay to jump out with. This could mean that he was AFK, but begs the question of why someone would go AFK with that much cargo.

We’ve reached out to both the victim and the gankers on this one, but have yet to receive a response. Until we know the full story, this one goes in the books as a legit gank. 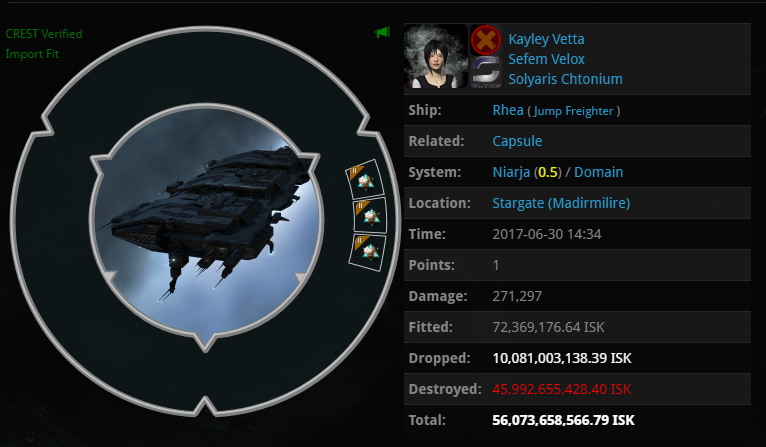 The Ministry Of Love strikes again! All of our Goon readers should take note here, if you’re not already familiar with Miniluv. These guys are on the front lines in high sec space keeping the Goon reputation as “bad guy” alive and well. Not only that, but they tend to get some massive kills, and are active basically around the clock! Get involved with relieving high sec of its unneeded ISK today!

Shameless plug aside, let’s dig into this kill!  This destroyed Rhea wound up hitting a whopping total of 56 billion ISK. Cargo worth 45.9 billion ISK was vaporized into space in a gank that likely took a minute or less to complete. That being said, some people tend to forget about the unsung hero who makes a gank like this possible: the bumper. We caught up with Mbube to get an idea of what it was like having to bump this Inertial Stabilizer-fitted whale.

This Rhea was “VERY difficult to bump” according to Mbube. Not only was the Rhea fitted with a full rack of Inertial Stabilizer IIs, but the pilot was also sitting in a pod full of Nomad implants which add a significant bonus to agility. Mbube mentions that he bumped the jump freighter for about 20 minutes without trouble while waiting for a fleet to form. It was around the 20 minute mark that the Rhea pilot woke up, and began making bumping an exercise in both patience and precision.

“My hands were shaking” Mbube says, “the most intense bump ever for me.” Bumping any freighter can be pretty exciting stuff, but a 56 billion ISK Rhea? That’s definitely the kind of stuff that gets your blood pumping. To make the bumping that much more intense, it was apparently getting pretty late for Mbube as an AUTZ bumper on an EUTZ fleet. Bumping can be difficult enough under good circumstances, but exhausted bumping can be extremely frustrating.

Nonetheless, Mbube and the rest of the fleet were rewarded for their persistence with a heavy loot drop. On paper, the Rhea dropped 10 billion ISK worth of loot. Picking through the list of dropped loot, however, reveals several fairly expensive BPCs, making for an even more significant prize.

So, what did we learn from this? Two things: high sec is not safe. Also, always have a cyno alt when flying a Jump Freighter.