Just a few hours ago, CCP released the patch notes for the upcoming August 11 deployment, including an extended thirty-minute server downtime.

For many capsuleers, the headline of the new patch will be a significant tiericide pass on Armor Energized Plating and Layered Membrane modules. This is accompanied by market grouping changes that correspond with the simplified naming structures of the modules. Resistance Membranes are mostly having their names reshuffled a bit, but arguably one of the most useful modules – the Energized Adaptive Nano Membrane – will now be known as the Multispectrum Energized Membrane. Eighteen smaller modules will now be collapsed into 6 flavors of the new Compact Energized Membrane module. There will also be meta changes for 7 levels, as shown below: 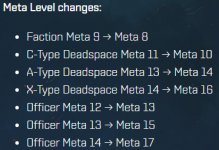 As far as specific module rebalancing, many capsuleers will want to note the following:

Market-oriented capsuleers will want to take advantage of their new ability to create multiple contracts for assembled ships at a time. Some observers are anticipating that this will be a huge relief for industrialists and NullSec denizens looking to market large amounts of ships at once.

Triglavian content enthusiasts will be glad to know that CCP has rebalanced Amarr, Caldari, and Triglavian NPCs, as well as EDENCOM NPCs now being hostile to players with negative standing. Players can also expect additional NPC structures as well as a doubling of Stellar Reconnaissance systems. The final quality of life improvement for experienced players or anyone hoarding alts is the new “Skip Tutorial” prompt they will receive when warping out of system. Unfortunately, Triglavian enthusiasts will be disappointed to hear that the invasion has come to an end, as this patch sees these standings changes classified as “Invastion” mechanics.

Additionally, as far as bug fixes go, CCP have fixed an issue where the client would freeze when undocking after starting a client instance. Additional improvements include fixing the mining ledger field editor, a UI scaling issue, and a disappearing UI on login.