A new devblog by has been released by CCP, covering Citadel structures, which are slated to replace outposts and some POSes. It heavily implies that supers may now be dockable, which has huge implications for the game in regards to asset protection and risk for super pilots.

The main theme of the devblog is an aspect of EVE every player is aware of: the prospect of losing your assets. Only EVE lets players gain so much, but if they do not remain constantly vigilant they stand to lose everything. This central part of EVE helps make it the distinctive, unique game we know. CCP felt that Outposts, while meshing with the other core philosophy of EVE in that you can create anything you want, did not fit in with this role. The new Citadel structures are now completely destructible.

There are plenty of implications for this feature being added, but the main one is that it makes losing assets such as supers a real possibility, even when they are docked up in the safety of a station. However, this will not be as easy as it sounds. Structures, as mentioned in previous blogs, will have formidable defenses as well.

The other part of this dev blog entry is what happens to items that are unfortunately caught in the wreckage of what was once a Citadel.

The devs made sure to not just let the items within just all drop at once, as it is certain the inevitable feeding frenzy that would result would be more grief than it is worth. Instead they added special rules that deal with what drops, how, and ways that the original owners can recover their loot.

The graph below gives a short rundown of what can happen to your stuff: 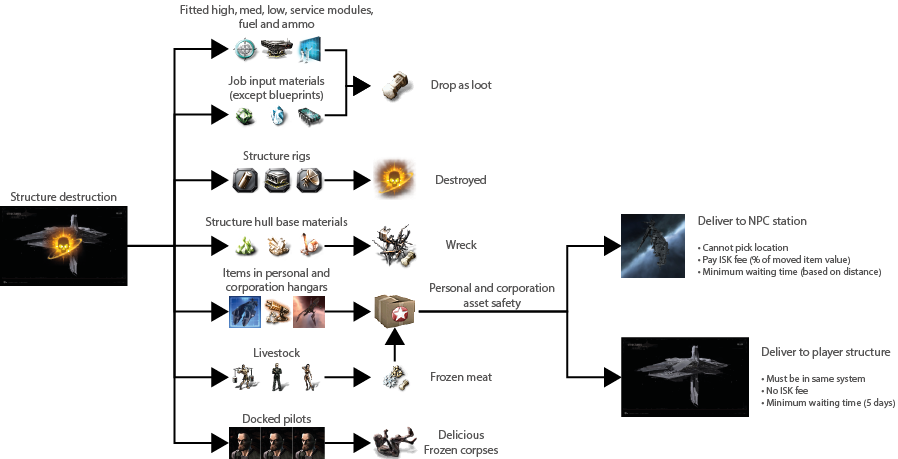 The big thing that the devs elaborated on is that rigs, which are fitted on the new structures much like ship fittings, will function quite like outpost upgrades, but they will be destructible as well. These rigs are predicted to cost up to several dozen billion ISK apiece, making each one a significant investment.

Assets from destroyed citadels may be moved from their former location by the payment of a fee to either an NPC station or another Citadel. The NPC station would be chosen at random, according to devs, to prevent potential abuse. But there is also the option of delivering goods to another Citadel, which is the only way to move things such as supers and titans. This also means that the only way to get those moved after the destruction of a Citadel is to have another XL-sized Citadel built in the same system. However, there will still be a five day minimum waiting period for these items to be moved.

The new citadels appear to be taking shape quite nicely, and will complement Fozziesov system well.