With the withdrawal of the Imperium from its holdings in the north, vast convoys of capital ships have been traveling towards the Imperium’s newly claimed home of Delve. In contrast with many previous Imperium deployments, this relatively long move has had some of the least casualties of any Imperium move op to date. This is tied to the newly released citadels, which for the cost of around 1.5 billion ISK for the smallest Astrahus model, have greatly increased the safety of any kind of capital move op through the mechanic known as tethering.

Tethering to a citadel is an automatic process that occurs when a ship is within 10 kilometers of the structure, granting immunity to being targeted or damaged. As an added bonus, the citadel will repair and refill the capacitors of any ship in its tethering radius. When a ship cynos into range of a citadel, it also becomes tethered as soon as it breaks its invulnerability timer, which is effectively instantaneous.

By setting up a chain of Astrahus citadels in every stop on the route to Delve, Imperium forces ran a coordinated series of move ops that successfully extracted Imperium capitals to their new home. When Jared Ki began to move his Avatar down this citadel chain, he had already missed all of the major move ops, and Pandemic Legion scouts were ready and waiting. 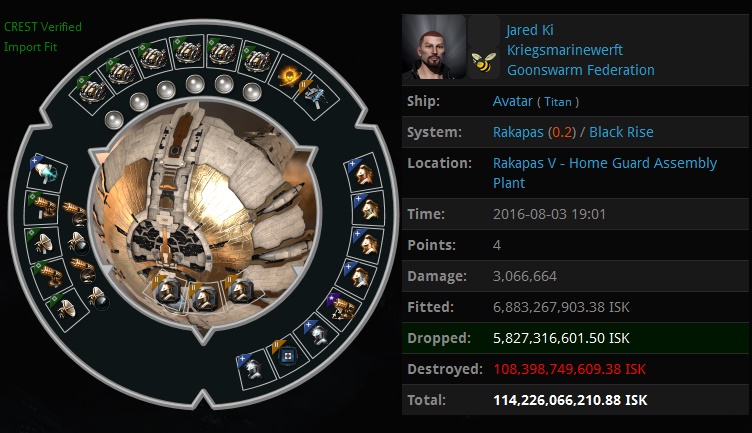 The dust had not even settled around the shattered Avatar when accusations began to fly that Pandemic Legion had used an exploit to aggress the Avatar. According to Imperium representative Jay Amazingness, as the Titan began its safe log off timer under the safety of being tethered, a neutral stealth bomber used an ECM burst. This caused the Titan to become aggressed, canceling its safe log off. With its safe log canceled, the Avatar was unable to escape the PL fleet before being bumped off the citadel.

Independent tests on Tranquility have been conducted to test whether or not the ECM burst could work in the manner alleged by the Imperium. The results were surprising; ECM bursts do in fact cause aggression timers through Citadel tethers. While CCP has yet to label this as an exploit, it does nullify the ability for ships to safe log as they sit on Citadels, making tethering a much less secure way of moving capitals.