With the explosion of the P3EN-E  Keepstar on June 18, Northern Coalition Dot can finally lay claim to a number one spot during the current conflict between The Imperium vs PanFam. With their tally of lost Keepstars at five, NCDot have now lost more Keepstars than any other alliance.

This number one spot was claimed during the morning of Tuesday June 18. Forces from The Imperium assembled but with a lot less hype than the previous week. As a result only 800 or so pilots showed up on the killmail for the Keepstar. NCDot again kept their Keepstar rigged and did not try to deflate the value of the loss as some alliances are inclined to do. 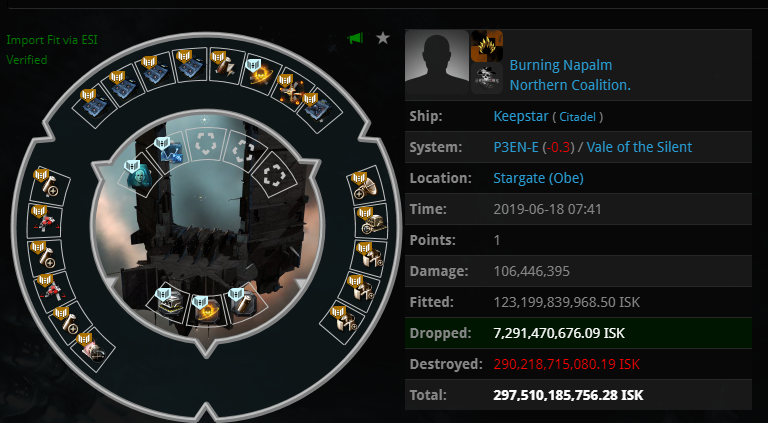 With the latest death of a PanFam Keepstar, their one remaining Keepstar in Tribute is now very much under threat. Any defence that PanFam may be inclined to muster is likely to be lack lustre. The main reason for this is that the use of capitals would be complicated by having to travel such a distance from the current PanFam staging system of Q-EHMJ in Vale of the Silent.

Over the weekend we saw continued move operations for the PanFam forces using the P3EN Keepstar before it could be destroyed. As P3EN was the last Keepstar in jump range of SH1-6HP, it is not unreasonable to think that PanFam have now completely abandoned Tribute to burn at the hands of The Imperium.

The NCDot owned Keepstar was not the only loss for PanFam. Over in Tribute, in the space of 7 hours two Sotiyos, one Tatara, eight Athanors, two Astrahus, three Fortizars and three Raitarus were also lost. The total is estimated to be in the region of 600 billion for these alone. There is also the potential for costs that will be absorbed by PanFam line members should they need to utilise the asset safety mechanic.

The Risks of Running

Although the attack by The Imperium has been well signalled it should be remembered that Tribute was a main home for NCDot and PL players for a good couple of years. This means that any PanFam player that has not been around could find themselves in a bit of a bind should they look to return. Especially if they happened to log out while still in their Titan. One can only hope that PanFam line members are being kept informed of strategic decisions made by PanFam leadership less they end up paying for not being informed.