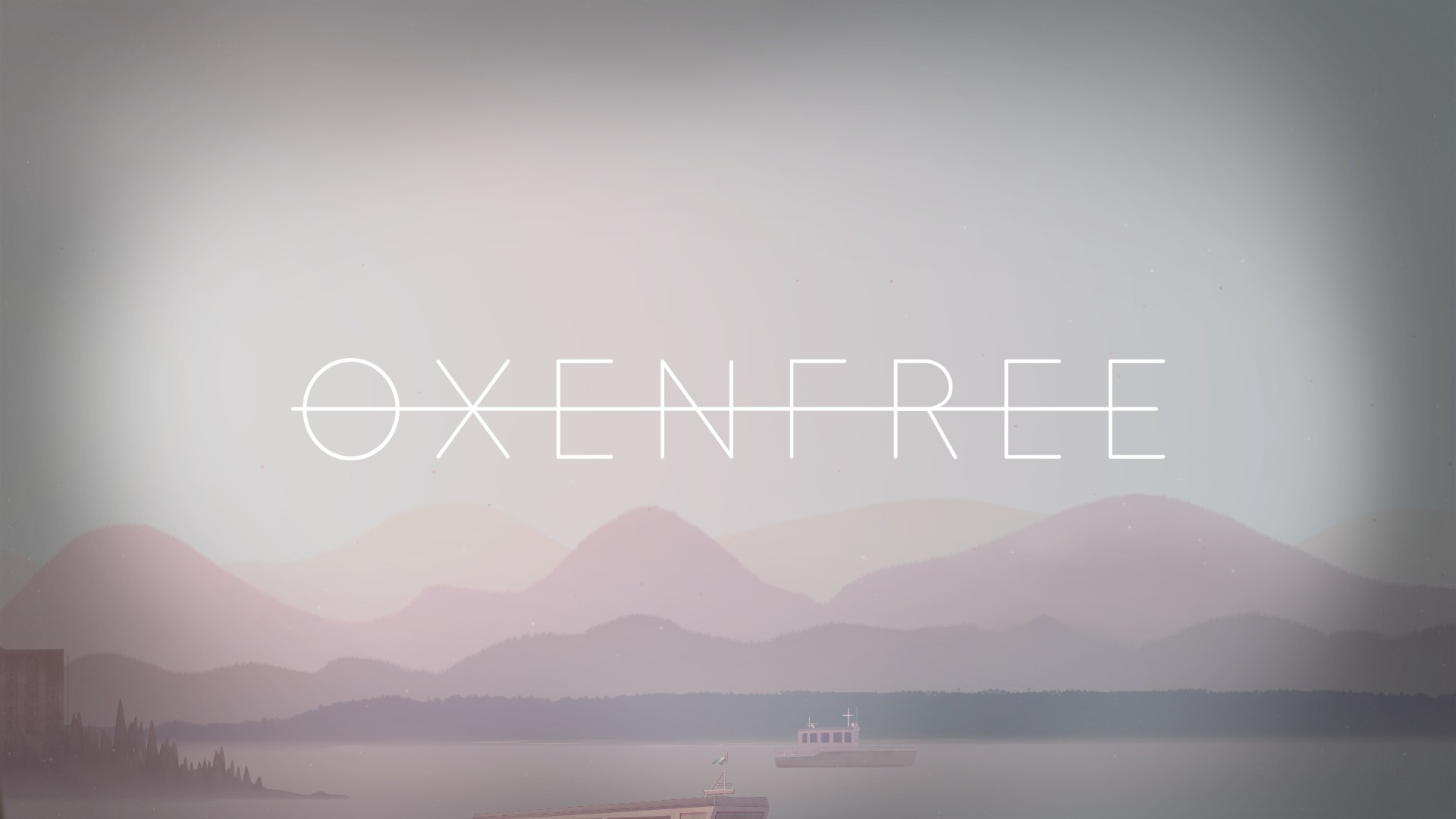 Coast to Coast AM is a radio show that deals with the unusual, the paranormal, and the downright strange. I listened to it as often as I could growing up, and enjoyed hearing about all sorts of outlandish things. My young mind thrived on the possibility of a world just out of reach – marveled in wonder and curiosity at hidden fantasies just past the periphery of my existence. 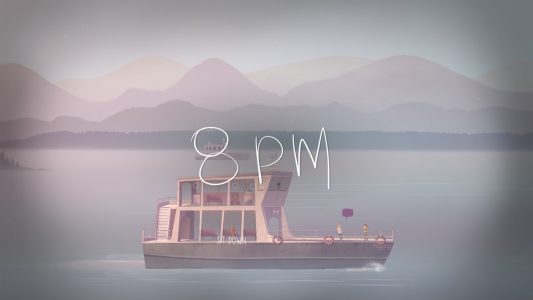 Night School Studio’s first game, Oxenfree, molds that wonder and curiosity into a ghost story, both unexpected and delightful. But to call the game a simple ghost story denies credit to the well developed characters that take center stage. And the haunted island they are trapped on.

The central cast is made up of five individuals: Alex, a high schooler who lost her brother, Michael, in a tragic swimming accident the year before. Jonas, Alex’s (new) step brother. Ren, Alex’s best friend. Nona, Ren’s secret crush. And Clarissa, Michael’s exceedingly bitter (ex) girlfriend. At worst, the group dynamic channels The Breakfast Club. At best, The Goonies.

From the outset, there is a real sense of authenticity to the characters. Some know each other. Others are barely acquainted. But all are ostensibly teen aged and skillfully written as such.

The voice acting in Oxenfree is some of the best I’ve heard. During my time with the game, not a single line felt forced or rehearsed. This serves to connect us with the characters on a personal level. And care about what happens to them…or not.

The player’s ability to care greatly affects the relationship between Alex and her four companions. As the night progresses, you’ll have the ability to choose who to take along with you and depending on your handling of general conversation, and specific situations, the interpersonal narrative will shift. The most interesting possibility is the ability to become enemies with all of the other main characters. It’s even the subject of a Steam Achievement – I’m the Firestarter.

Don’t You Forget About Me

Oxenfree is, above all, a ghost story. And ghost stories are strongest when the central cast is compelling. Like Stranger Things, the impact of Oxenfree is felt most acutely once you are invested in the fate of the five main characters.

Luckily, that happens early on. And as the ghost story progresses, the stakes rise. Decisions become harder. 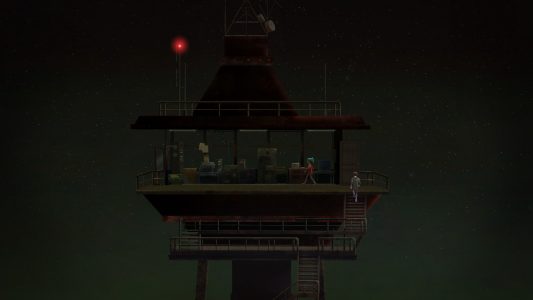 Much of Oxenfree’s charm is embedded within the narrative, so I can’t dive too deep without ruining a few delightful surprises. What I can say is that the narrative holds on to the unrefined “ghost story” aspect for a bit too long. And a twist is thrown at the player near the end of the game. So late, in fact, that the impact of the revelation was far less gut wrenching than intended (more on that later).

It’s All In The Reflexes

The gameplay in Oxenfree takes a back seat to the interaction between the main characters. And to say that it caters to the development and interplay of these relationships would be an understatement.

The player can use Alex to navigate, and interact with, the game world. And she carries a small radio to investigate anomalous signals scattered around the island. But the bulk of the player’s actions occur during the many conversations between Alex and one (or more) of the other characters.

Speech bubbles govern these interactions and present the player with one of three dialogue options. But these bubbles don’t last for long. In Oxenfree, one of the tenants of conversation is that the player has to react without the luxury of pondering the best response. So the player may either choose one of the options given, or remain silent. 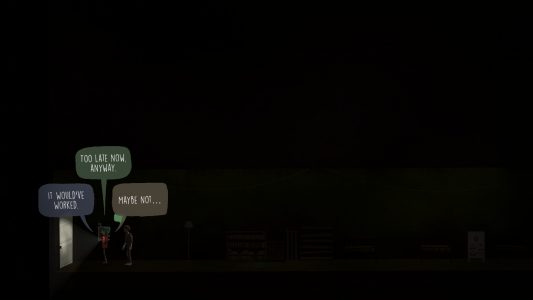 The former option inserts the chosen dialogue into the conversation seamlessly. Sometimes, Alex will interrupt whoever is speaking, cutting them off. Other times, she’ll wait for them to finish what they were talking about. But the delivery is always perfect.

I only chose the latter option a handful of times, but more often than not, remaining silent kills the conversation. This option typically feels awkward, as if much was left unsaid. 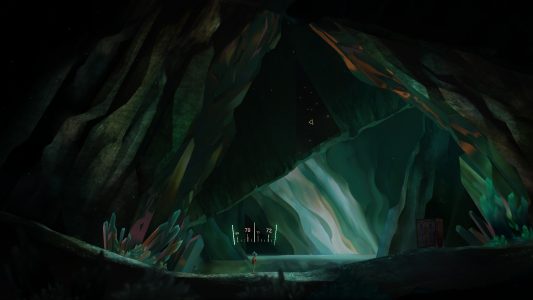 Besides conversation, the rest of the gameplay consists of walking around the game world and using a radio to tune in to anomalous signals or other ghostly phenomenon.

Screws Fall Out All The Time…

Oxenfree is a very interesting game. But for all of its charm, there is an equal measure of disappointment.

Much of that has to do with stylistic choices. Many critics describe games like Oxenfree as “walking simulators” – where much of the gameplay involves a measured pace as the player navigates the world. Sometimes this formula works, and sometimes it doesn’t.

For the most part, conversation fills the journey from A to B. And when the player backtracks, silence – and the game’s exceptional soundtrack – don’t make up the difference. And that doesn’t forgive a late game collection quest presented to the player right before the final chapter of the game. It’s optional, but trekking through large areas for the third or fourth time is an unnecessary grind (especially when these areas have an exaggerated size designed to accommodate lengthy conversations). 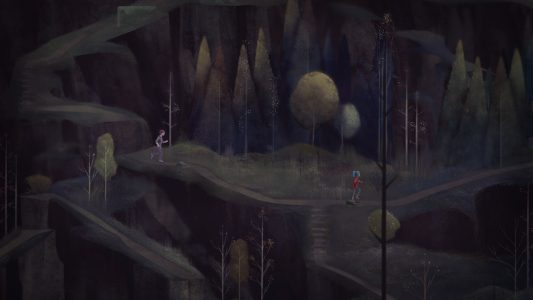 The narrative also has a few spots where I lost interest – sometimes for weeks at a time. This diminished my connection with the characters and took a toll when I eventually returned. There was a period of adjustment where I had to be reminded plot details through conversation. Thus, the twist near the end held less impact than I would have liked.

Perhaps a single play though would have prompted me to interpret the twist differently, but I still felt like the narrative held on to the “ghost story” aspect for too long, presenting the twist far later in the game than I would have liked. This rushed the final chapter and stole some of its breath. More buildup would have helped this.

I like Oxenfree, though not for the reasons I expected. 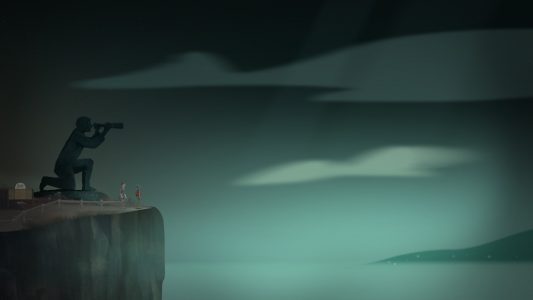 The soundtrack was a delightful surprise. Composed by scntfc, it’s a synth heavy album that harkens back to science fiction and horror offerings from the 70s and 80s. This type of music hasn’t been mainstream for decades, but has seen a resurgence with indie game titles and shows like Stranger Things. It’s nice to see this type of music make a comeback, though I’m biased towards the genre.

Also, the twist that I mentioned earlier happens to deal with a subject I’m particularly fond of. Though unexpected, it lends a certain depth to the game that I didn’t initially expect. And it gives the player ample reason to play through more than once. Add to that the branching narrative with multiple endings, and the game’s longevity really begins to shine.

Oxenfree is available on Steam ($19.99), as is the soundtrack ($9.99) – or both can be purchased as a bundle ($24.99). I purchased the game at 75% off, so I only paid $4.99 for the title. And, honestly, I can’t see paying that much more for it. Some who really enjoy Telltale games and the “walking simulator” genre will find this title to be fantastic. For those people, I would definitely suggest picking it up. But if you don’t love narrative driven stories, or want a bit more from the gameplay, wait for a sale.

That doesn’t mean that the game isn’t good, or worthwhile – I just didn’t enjoy it as much as I had hoped to. Either way, I’ll be keeping an eye out for the next title from Night School Studios. I can’t wait to see what they’ll come up with next.

Editor’s Note: this article was written before the Steam Christmas sale. Oxenfree is now on sale at the 75% discount mentioned in this article.