CCP released the Monthly Economic Report (MER) for May 2020 on June 24. This may be the final report on a peacetime economy for some time, as the end of the Imperium-Legacy Non-Invasion Pact (NIP) set for July 5, carries the possibility of a major conflict that could throw New Eden’s economy into overdrive.

For those new to EVE, the MER documents the flow of ISK and other player assets throughout New Eden. It’s posted to the EVE Online Dev Blog on a monthly basis, and comes as a series of graphs detailing production, trade, and other economic activity. CCP also makes the raw data used to generate the report available to all. The nature of the in-game market and the generosity of the developers have together made the MER an aspect unique to EVE amongst others in the gaming world.

The quantity of ISK destroyed has steadily trended upwards since mid-January, when many COVID-19 lockdowns came into effect and the Triglavian invasion ramped up in-game. Mining Value, which marks the ISK created through the extraction of ores, has also risen slightly over this period, but is still significantly lower than this time in 2019 due to a major drop during the Nullsec Blackout late last year. It has since fallen to one of its lowest moving averages since 2016, bringing Production Value, which measures the ISK value of all items produced, down with it. As has been pointed out before, on the whole it would seem that production follows trends in mining by around a month, and that mining is inversely related to ISK destruction. 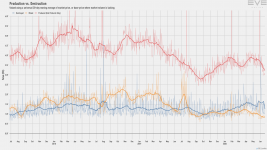 With regards to individual regions, The Forge and Delve preserved their places as the first and second highest producers, respectively, with minor changes in value. Delve also maintained its position as the highest Mining Value region, remaining virtually unchanged from April to May at 1.8 trillion ISK. 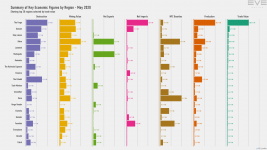 The Forge has continued to dominate trade, with Domain maintaining a distant second. Total Trade Value stood at 556.5 trillion ISK for the former by the end of May, falling 24.9 trillion from April, while the latter gained 0.8 trillion in trade for a final sum of 49.1 trillion – still less than 9% of The Forge’s value, despite its losses. Another trade hub region, Sinq Laison, takes third, and Delve tails closely in fourth. 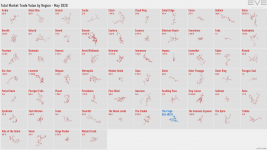 On the whole, this MER most interestingly sports an increase in ISK destruction, and a resulting decrease in mining and production. This points to increased activity throughout the month of May, and follows an upward trend that began early this year. Aside from this, Trade Value rankings remained constant, and Delve continued to win at mining and NPC bounties. There was some slight economic downturn in trade and, as has previously been noted, the month of May generally entails the start of a decrease in player activity, and if data from early June are anything to go by, we will likely see more drops across the board in the near future.

That could change soon though, as the end of the long standing NIP brings the possibility of a galaxy-wide war to New Eden and new developments to the Eve economy. After a year of relative stagnation between the largest coalitions in New Eden, something major might be about to happen.