MER for September and October

CCP recently (November 15, 2018) released two monthly economics reports (MER) for September and October. The September report was delayed, according to CCP Falcon, “due to the crazy business that was EVE Vegas 2018.” Here, we’ll analyze the reports, look for trends, and speculate a bit regarding the future.

The reports are not Sunday-hammock reading, as one of my former teachers noted when she assigned a particularly devlish text. Erick Asmock has noted several times, when writing previous MER summaries, CCP provides charts with the raw economic data, but doesn’t interpret it in any way, nor does it couple the MER with other data that affects the economic data. Are fewer, or more, people logging in to play EVE during these months? Are prices rising or falling?  Without considering other influencing factors, we must be careful about speculating based on these MERs. We should also note that the regions of Fade and Cache are missing from the data, for unknown reasons. Other information is missing from October’s report, such as the certain economic indices. Perhaps Las Vegas just that “crazy.”

With that as a preamble, let’s dig in.

In August we saw the battle of X47, the largest battle in EVE history. Last August represented a two year high water mark for destruction in New Eden. It makes sense, then, that in September, we saw destruction fall considerably from August. The top three destructive regions were The Forge, The Citadel, and Delve. In October, destruction continued on an upswing overall, considerably higher than two years ago at this time. Clearly players are getting to “blow things up” in EVE more than they were two years ago or even one year ago. The most destructive regions were The Forge, The Citadel, Geminate, Lonetrek, and Delve. 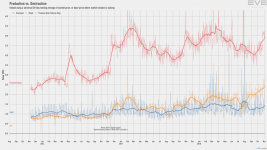 Mining showed a sharp uptick in September and October, after a sharp decline in August. These two numbers, for destruction and mining, inversely mirror each other. As destruction increases, mining decreases, and vice versa. Clearly, some players engage in extensive mining when not actively warring with their enemies. One region completely dominates mining: Delve. The figures are almost staggering:  16.5 T in September and 19.1 T in October.

Production also shows a clear relationship between mining and destruction. Production dipped in September and October, to its lowest point since April of 2017. Still, production is far ahead of where it was two years ago. Looking at the relationship between destruction, mining, and production, we can say that after a massive conflict, players slow down production and start mining; then, when they have replenished their supply of ore, production again picks up, about two months after the end of a major conflict. As with mining, Delve produces more than any other region, more even than The Forge, home to Jita. 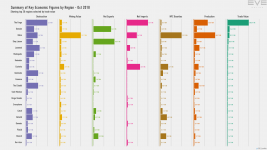 Other numbers call attention to themselves. Delve denizens produce a lot of income by krabbing, making almost 46 T ISK in October alone. The graph looks like this: 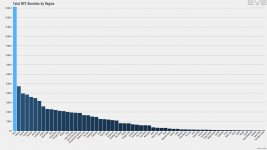 These graphics represent what Delve dwellers learn from the time they are “new bees” in Delve.  In October, Delve’s income from mining and krabbing represents 22% of all mining and krabbing in New Eden. Mining, krabbing, salvaging, and talking s***. That’s what players do in Delve until they get the ping to go to war.

The MER, then, continues to show what we have seen in New Eden’s recent past. Two regions power the engine of EVE’s economy: The Forge and Delve.

In a market economy, supply and demand are intimately connected.  What can become of the vast amounts of ore being mined at present, not only in Delve but across New Eden? At the moment, it seems to be pouring into production.  But destruction is slipping, meaning we could see large stockpiles of unused ore, ships, and modules. Prices have fallen, even for things like SP injectors.  If we see all of New Eden, including the alliances and wars between them, as a form of economy, we have seen large “corrections” in the market in the form of massive wars that have caused mass migrations. The Imperium was kicked from the north and settled in Delve. This event, by whatever term you want to call it (World War Bee or The Casino War) has very slowly led us to where we are now.  Currently, the north is being destroyed/self-destructing and that represents another form of correction. Is Delve due for another correction? Or will other alliances and corps be the ones feeling “corrected?” Borrowing a line from the great Johnny Mercer song, “Something’s gotta give.”