Friday April 21 CCP published the Monthly Economic Report. This is usually published at the start of each month. This month however, it was delayed by Fanfest and Easter.

This edition of the monthly report had more words in it than usual. CCP Quant expanded on discussions from the economy roundtable at Fanfest, and answered some questions players have had:

Are Regional Stats removed or not?

Since the announcement of removal of regional stats back in February, players have been having heated discussions about whether the stats should stay in or not.  The February report came out with the stats still included, and when Fanfest came around, it was one of the topics players were most keen to discuss with CCP Quant.  By and large, players appear to want the stats to stay in, so one option put forward was delaying regional stats for a few months, especially in the case of import/export data. For now, the stats will stay in, and there will be a discussion with the new CSM when they take office.

Will there be a price history generated for the new PLEX?

As was announced last month, Aurum is going away, and will be replaced by a smaller version of PLEX, where 500 of the new PLEX will be equivalent to the old PLEX. One area that has raised questions with this is will CCP create a history for the new PLEX based on the historic data of the old version?

If there is no history, it means that there is no way of seeing how the price of the new items compares to the old ones (this is not quite true, you can always multiply the price of the new item by 500 to get the equivalent price, but, some people want to be able to see this on a graph).  Some players have felt that a lack of history would give more experienced PLEX traders the opportunity for making extra isk from the initial confusion in pricing (or, some would say, price gouging). Others feel that as with any new item (which the mini-PLEX effectively are), the market has to find its own level, and bumpiness, as it settles in, is just par for the course.

CCP Quant did not give an answer on what they will do with this but rather opened it up for feedback from players, so, if you want to put your point of view on this across, head over to the comment thread for the MER here.

One final thing before we move onto the graphs, CCP Quant mentioned in the roundtable that he would like to bring some form of asset-backed securities into Eve. In the context of Eve, this would be otherwise known as loan contracts. The situation currently is that if you want a loan, you usually provide collateral, and a third-party holds this for the duration of the loan. This requires players to get hold of one of the third-parties in Eve, who can be quite difficult to get hold of. They may also be unwilling to hold collateral that is either small in value or scattered all over New Eden. And they prefer collateral in items which will be easy to liquidate if you default.

What CCP Quant proposed is a system that would work as follows:  Player A wants to take a loan, and Player B wishes to give the loan.  Between themselves, they would agree how much the loan is for (the principal), how long the loan takes to be paid back (term), when payments will be made (schedule), and the interest rate.  All these would be able to be entered into the contract when it is created, along with the collateral that Player A is putting up.  Player B then accepts the contract and ISK changes hands.  If Player A misses a specific number of payments (two would be the minimum, to allow for computer catching fire and other force majeure), then the loan would be considered in default and Player B would receive the collateral.

This is an interesting suggestion, as there are more players who wish to have loans than there are third parties available to handle them, and many of these players want small loans (below 10b or so) which is below the range at which third parties will often get involved.  Something that was brought up during discussions at Fanfest when players were talking in the bars of Reykjavik was the possibility to allow credit ratings, and the possibility to borrow more than your collateral is worth if you are of good enough standing.

The possibility of larger organisations using their assets to get loans at preferential rates, and then loan out to their members was something that was mentioned as well.  This would work by, for example, an Eve University player wants a loan, but might lack collateral, or only be able to find a loan at a high interest rate.  Eve University, however, has substantial assets and could negotiate lower rates.  EU would take a loan, and then internally create loans for its members at better rates than they could get externally.

People were also discussing how players could create their own credit ratings system. In short, this idea stimulated a lot of conversation, and many ideas were thrown around for the potential this has.  Personally, I think it would be good for moving loans off of the forums and enabling players who have ISK stagnating in their wallets to loan it out without all the current hassle involved.  If loaning for more than the collateral amount is possible, it would also allow for formalising uncollateralized and under-collateralized loans (which are usually in the low billions, with one or two notable exceptions), even if repayment is still trust-based.
In short, I think this would be an exciting addition to the economic side of Eve, and I hope that CCP develops this suggestion further.

I am not putting all the graphs in here, just ones that are particularly interesting.
The first graph is a new one, the breakdown of ISK faucets. 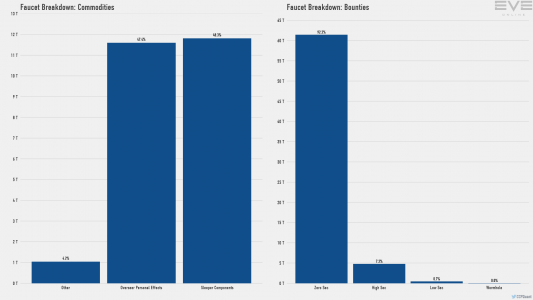 The interesting aspect of this graph is the % of bounties that are in nullsec, 92.2% and just over 60T. A lot of people were surprised by the amount of ratting going on in nullsec, and were expecting high-sec to have a much larger share than the 5T or 7.2%.  I don’t think anyone who has spent any time in null was surprised by the value there though, although the highsec value is still lower than expected.

The second new graph was for Liquid Ozone supply, which, as expected, showed a large increase in accumulation since the Rorqual changes in mid-November. 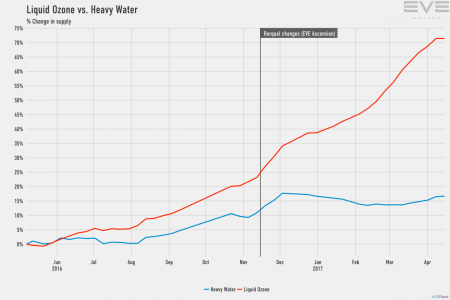 The price of Liquid Ozone has remained relatively stable, however, with buyouts occurring to prevent it going below 100 ISK per unit on a regular basis. 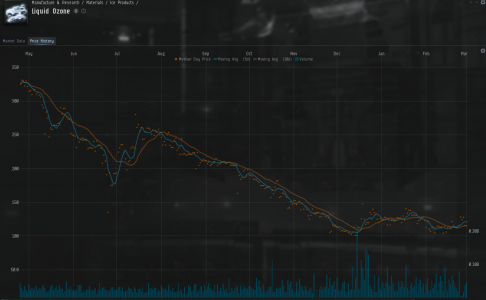 Moving onto the standard graphs for the MER, the production vs destruction graph shows a drop in production for the first time since early autumn, whilst destruction has remained flat. The mining amounts are still bugged due to not showing Drones, so cannot really be used, but the non-Drone mining is showing a dip similar to that in production. 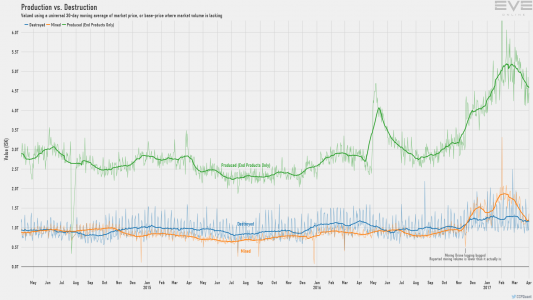 The regional values show Delve continuing to be second only to The Forge in production, followed closely by Lonetrek and The Citadel, as with previous months.

The data I want to discuss in more detail is related to the trade value. There are two charts which are relevant here, the first is the “Total Trade Value”

The second is the Service Fees Breakdown by provider: 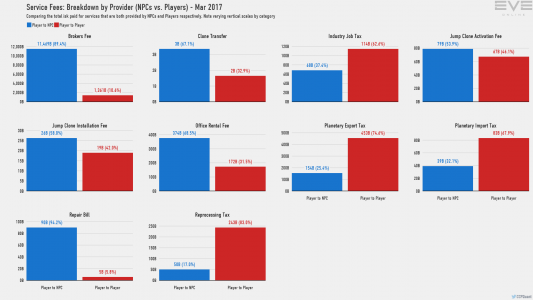 The first thing to note, is, as suspected by several people, and confirmed by CCP Quant yesterday, the Total Market Trade Value graphic is not showing citadels.

The actual figure for The Forge is around 602 Trillion ISK per month, not 454T, which means that 148T per month is going through the various structures in The Forge.

As the public tax rate on the most popular citadels is 0.1%, that means that if everyone who is buying and selling there is paying 0.1% (which they are not), the income would be 148B per month.

Compare this to Delve, where the actual value is 15.7T, or just over 500B/day on average, and the broker rate is 2%. This means that the income from Delve broker fees in citadels is around 315B per month.
Combined, the two values from these locations is 463B ISK, out of 1.36T ISK in broker fees paid to players.

When we look at the difference between the total value shown in the MER, and the actual values reported by CREST for trade transactions per month (thanks to Ethan from Adam4Eve for pulling these for me), we get this: 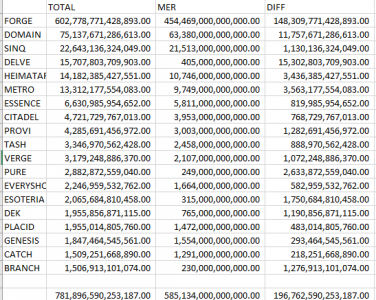 This is for the top 20 regions in Eve. You can see the main discrepancy (as expected) is from null regions, where a much higher volume of trade goes through citadels, and you can see that some Empire regions do not really have much active citadel trade.

From next month, the trade values will likely include both citadels and stations as one value, so, this is a good opportunity to get out there and figure just how much people are earning from citadels in each region.