In September, CCP will put a severe dent in courier contract scamming with a change to cargo drops in space.

The change, which is live now on the Singularity test server, allows ships to deposit items into a citadel without docking. That bypasses one of the most common ways a citadel is used to scam players in high security space.

The scam involves a character creating a contract to be delivered to a citadel. Typically, the citadel will be open to all players while the contract is outstanding but as soon as someone accepts it, the owner closes the access list so that no one can dock. The hauler, therefore, cannot deliver the package and must pay the exorbitant collateral fee.

One of the most prolific courier scammers in Eve Online said it’s a clear nerf targeting people like him, but there could be other reasons for implementing the change.

“I think what CCP is trying to do is to get rid of the state of paranoia that haulers had to be in to keep themselves safe,” said Siegfried Cohenberg. “Sure there are people like myself who will try and deny docking rights after our contracts were accepted, but the vast majority of citadel owners could not get stuff moved to their station because they were new or unknown.” 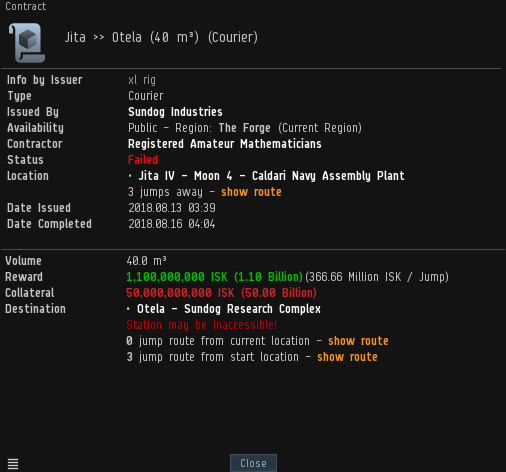 “My second largest, I’ve had someone take 16 billion spread over 6 contracts,” he said. “I don’t like (the change). If I had it my way, I’d prefer if every hauler just gave me all of their ISK and contracted all of their assets.”

Haulers have found a way to counteract the scam by gathering intel on known tricksters and their structures. The in-game Haulers Channel includes a safe/unsafe list that players can reference when choosing contracts.

Yemontoshi, one of the moderators of the channel, said the change is a long time coming.

“The current mechanic of changing access rights and thus turning the process into a ‘scam player’ button with no counterplay should never have happened,” he wrote. “The list will likely continue to exist, both to mark previous scammers and new scammers that decide to return to the old style of gank contracts, with high collateral on low value goods and ganking the hauler in space. At least it’ll make the scammers have to take some action in space, so that’s a big improvement.”

Yemontoshi said players will have to watch out for scams, even those affecting courier contracts.

“But it returns the contract to be more of a ‘contract bound by mechanics’ rather than one side having complete control to force the other to fail,” he said. “It also means scams with courier contracts will involve actual activity in space, which is better for everyone.”

In the forum discussion where CCP Fozzie announced the new Upwell Cargo Deposit, players praised the change. One courier, however, lamented that it will create an imbalance that ignores emergent gameplay.

“While functionally I see nothing wrong with the change, I think it’s solving a problem that didn’t need fixing” wrote Sigourney DuMont. “I’m concerned about the precedent it sets as well for future citadel related changes, which could further shape player interaction rather than letting the gameplay emerge organically.”

CCP developers have encouraged players to test the changes on Singularity and provide feedback in advance of the patch in September.