With 91 Billion ISK a man could change the very map itself. With a very heavy heart, I was given the honor of speaking with the man nUMbEr5iSaLivE. I’m sure many of you know by now, in the early, hazy morning, a lone interceptor travelling with what could be the largest amount of ISK I have ever sat and thought about set out from Highsec.

His goal was crystal clear: a new life. Having headed back to the dangers of Empire from the relative safety of Afghoonistan, one man tried to change his life. Originally, the haul was only going to be a Rattlesnake BPC.   While in Highsec, nUMbEr5iSaLivE thought about the bigger picture. If he could get all his assets home, he could research them and copy them and work on them. It was then our friend nUMbEr5iSaLivE decided to move all his assets at once in an old fashioned pre-dawn blitz home.

You’ve done this. I’ve done this. We’ve all made this mistake. Fortunately for you and I, we were not nearly as wealthy as nUMbEr5iSaLivE. When you or I welp, it’s manageable, a few hundred million here and there and that’s that. Often times I envy those who have the means for loss mails like this. Some of us out there wonder how we will be able to afford our next Flycatcher for the roam, or that pretty new Rook you’ve wanted so badly to try out. It gives me hope, nay, it gives me the motivation to get off my ass and try and do something with my egger life.

When asked about the losses inside, he says he is most pleased the Fortizar Blueprint did not drop. Out of 91 Billion ISK, just under 10 Billion dropped. One can only thank the loot gods and pray that when this happens to them, they are as fortunate. 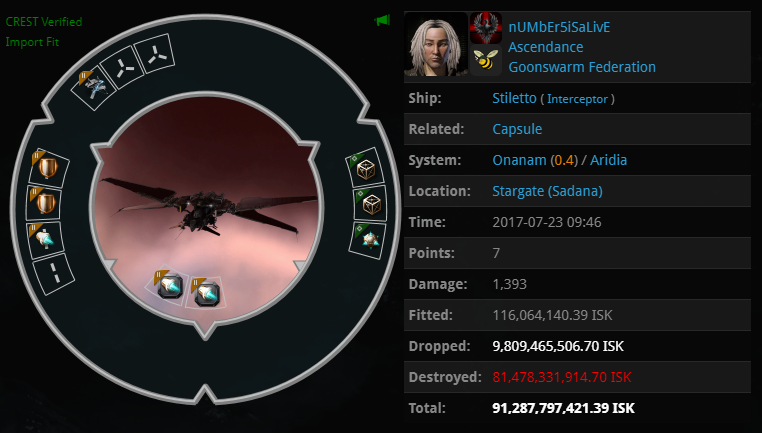 This is Johnny Crowe from Goonland saying, fit safe, and fly dangerously, and steer clear of Onanam.