At 1930 in X-M2LR, Syndicate region, The Initiative Fortizar came out of reinforced for its armor timer. Mercenary Coalition and The Initiative have been fighting over this system for some time. The Northern Coalition fleet paused the Fortizar two minutes into its repair timer.

Imperium Cerberuses supported Initiative Machariels. The Initiative also brought bombers and Maguses. The Imperium brought Jackdaws with a Claw fleet for support. Northern Coalition and Pandemic Horde both brought separate Machariel fleets with Northern Coalition bringing seven titans. The titans did the bulk of the damage to the Fortizar, with NC/PH subcaps simply being there to support the caps. Mercenary Coalition arrived in a Ferox fleet while Guardians of the Galaxy brought a Loki fleet that didn’t fare well.

NC lost seven Apostles that warped to the Initiative Fortizar and were unable to get out. 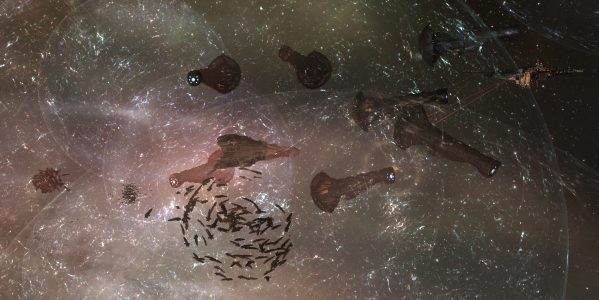 There were various small skirmishes while the titans kept the Fortizar repair timer paused but no large brawl between the two main fleets. NC. smartbombed the Goonswarm Jackdaw fleet, causing the loss of the majority of the fleet. Northern Coalition reinforced the Fortizar and the final timer comes out Monday at 1930. While the attackers began to extract from the field, NC. Machariels smartbombed the Goonswarm Claw fleet as well.

Fighting continued over Initiative towers and citadels in 2G38-I immediately afterward. While fighting is still ongoing and not all killmails have been updated, Imperium forces lost 41 billion ISK while the attackers lost 54 billion ISK.