In a Rage, Can Hard Knocks take the Initiative?

The Initiative [INIT] has begun to attack the C5-C5 system of J115405, also known as Rage, to Hard Knocks [HKRAB] who live in it. The Initiative began their attack on multiple structures in the system, including the main Keepstar named “Fort Knocks.” This comes after the INIT leadership update was released, which said:

​Amidst the background murmur of cosmic signatures, stardust and exotic matter flickering across high-precision instruments emerges a vivid trace bearing the hallmarks of an unregistered Fenrir class freighter bearing the insignia “Ana ugglor I mossen.” As the event horizon closes behind it, Ana’s sensors lock onto the environment of J115405 as core systems calibrate and execute against their boot sequence. Unusually, Ana’s exhaust ports show extremely low radiation, barely registering on sensors which suggest it has been drifting silently and unobserved for some time.

​In a distant star system, behind drifter wormholes and layers of channel pings, an Initiative. [INIT.] Stuka fleet is spooling up, numbers multiplying and thrashing for a place in history. ETA to Rage is within minutes as a drifter pathway provides the route in for a rendezvous with death. Boosters are consumed and final trajectory set for deployment as citadel structures are poised to drop and manufacturing sub-assemblies snarl with hunger, ready to feast on millions of cubic metres of compressed ore.

​There are no maps for these territories and no presentable rationale for this event. Is this a contract formed by the cries of wormhole communities against the oppressive regime of the red crab or an unprovoked assault on the impossible?

​Soon the news will be out, “Assault on Fort Knocks!” “Is Unassailable Wealth Truly Unassailable?” No one knows the answers, nor the identity of the freighter ghost fleet. Succeed or fail, history is in the making. . .

The Initiative also released a video “trailer” for this invasion as well as the post.

So far, the Initiative has taken down multiple POS structures, and brought one of the two Keepstars into its reinforcement timer. The Initiative-led Imperium forces have lost 60 ships to the Keepstar’s defenses during the attack. 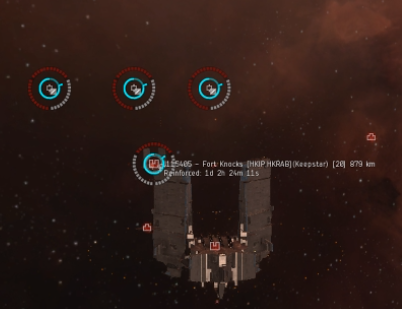 This unprovoked surprise attack has been, well, surprising. There are very few times in New Eden’s history where nullsec and lowsec powers have gotten involved in wormhole affairs, and a lot of the time, it was thought that it wasn’t worth it. Clearly, the Initiative has taken the initiative and changed their minds.

When most wars break out, the hardest part to figure out is why. This was an unprovoked attack. No wars have been fought between these two powers. When I discussed with a INIT member, he told me that they were bored and wanted a challenge. While I believe this to be somewhat true, this seems strange because there are no politics involved, and we can all admit shooting structures is not the most fun thing in EVE.

The removal of asset safety provides one motivation. HK members are some of the wealthiest bunches in EVE, with their C6 and C5 systems that can generate up to two billion ISK per hour per dread, and given the age of some of the players, we can assume that a part of the incentive to attack the system is the possibility of trillions of loot held up in there. I mean, the Keepstar’s name is a play on Fort Knox, which is the United States gold depository in Kentucky.

It holds a lot of gold.

The first and foremost challenge is taking down a Keepstar, along with the fact that HK has more wormhole experience and has the home field advantage. I would argue that the home field advantage is 10x more important in wormhole space vs nullsec or lowsec, because you have to import capitals 2-3 at a time per hole before it collapses. It’s the same with subcaps, only you can fit many more in before your wormhole collapses. HK already has all the caps, ammo, and tools it needs to successfully defend the system; the Imperium doesn’t. Also, there could be enough people involved at this point to cause TIDI in a wormhole, which is almost unheard of.

At this point, wormhole space is coming together to defend Rage against an “outside” invasion. Most groups have now confirmed they are “Rage Rolling into Rage.” The Imperium currently has the numbers advantage, but wormholers are going to fight with whatever they have to defend the system. Propaganda is now flooding reddit and the forums, and both sides are preparing for the battle of Rage. Wormholer wealth and skill vs Nullsec numbers and tactics.

The best of New Eden and Anokis are about to collide, and there will be blood.

We will continue to update you on the situation in J115405 as it develops.

I have been playing EVE for about 4 years. I like 1billion isk ticks and PVP. I report on wormhole stuff.