I was recently introduced to a hilarious new board game that creators Michael Worley and Elise Stoner worked on with some friends called Henry’s Hotties. Based on King Henry VIII’s “murder-happy approach to marriage”, this lighthearted game can last from five minutes to more than an hour. Each player can choose from eight different ladies based on the historical wives and/or mistresses of the guy who created a whole new church so he could have a divorce. You compete to be the wife who bears him the coveted heir he desperately wants. If that does not work out, you can simply survive while everyone else dies from the plague, syphilis, and rampant accusations of witchery. You can also die during childbirth. Try not to.

I had the privilege to play a couple rounds with Michael and a few other mutual friends before he left town. The game is already very polished and professional. How a few undergraduate students made it working on their own intrigued me. Each cleverly written card shows the time and effort put into the game. The sheer level of wittiness when it comes to the wacky things that can happen is a testament to that fact. Set in London so, of course, it rains a lot.

Each player starts the game at Lady. Designed to represent the social hierarchy at court, the position one will find their character on the board will be dictated by the role of the die. Each turn has the dealer pull a card and read out the actions taken depending on how each player rolls and what position they are in the hierarchy. Every time a player rolls and they move up or down a position, their character is affected by only the section of the card relative to their position. The lower on the hierarchy you are, the more likely bad things are going to happen to you.

If you fall down to the level of prostitute, the likelihood of you dying is so high, I was actually surprised at how hilariously cruel some of the cards were. Here is an example of what they look like from the Kickstarter page. 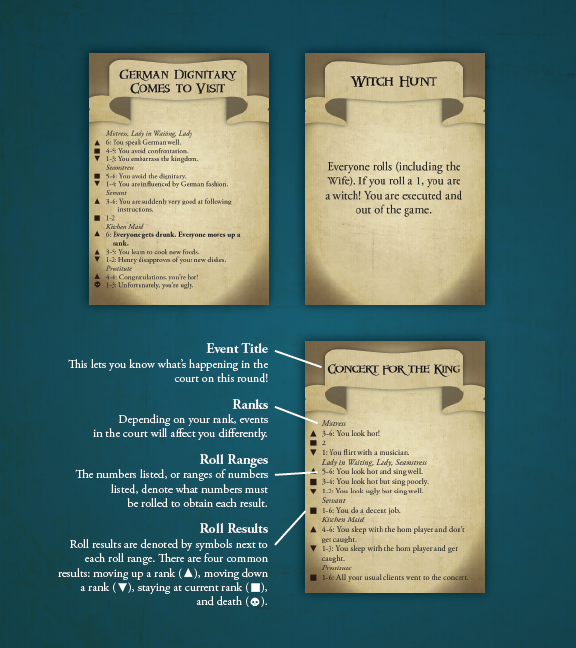 Even the upper classes are not safe. It is very easy for everyone to die, or for nothing remarkable to happen. Each character card the players can choose from at the beginning of the game comes with a little perk that may benefit them later on during the game, which can make things interesting. Because of the fairly mature content, the creators don’t recommend anyone under the age of 13 to play, but they went the extra mile to keep the jokes pretty clean just in case. The Kickstarter page has further information about the game and bonuses patrons can get, ranging from T-shirts, a booklet on the history that inspired the game, and an “autographed” portrait of King Henry himself! They also have a video by the creators explaining the game.

About the Creators of the game

I asked Michael for a synopsis of how this game came to be:

I met Elise Stoner during our freshman year at Whitworth University, and the two of us became friends after sitting together in a public speaking class. We quickly bonded of our love of graphic design and off-the-wall humor. Over the next couple of years, we worked together trying to find fun ways to keep our friends involved in each others’ lives during breaks by concocting silly ways to motivate people to stay in touch.

After moving off campus, we got in the habit of having weekly game nights with friends as a way to keep people close. One day last October, Elise told the group at game night that she was going to try to make a board game from scratch for a graphic design class and asked if anyone would like to help her. Another friend (Sarah Hill) and I volunteered to help. We started working right then, at ten PM on a Saturday, and worked until two in the morning before returning the following afternoon and working for another four hours. By the end of the day on Sunday, we had a rough prototype of a game about the wives of Henry VIII of England and their heroic struggles to survive under the misogyny of the king. We decided to call it “Henry’s Hotties”.

As stated on the Kickstarter page, the creators must order 1,000 copies of the game for distribution to produce them at a professional level, as well as cover shipping costs. The current goal of $13,000 just barely reaches the minimum, with almost no profit at this point. The creators have spent hundreds of work hours on this game and it is remarkably good. They also have a Facebook page. Even if you cannot support it yourself, please spread the word before the deadline of June 11! This game is absurdly fun, and I hope it reaches way beyond the goal it needs to become funded for broader distribution.

If you are interested in supporting this game, please go to the Henry’s Hotties Kickstarter page.