As usual with CCPs login events, they are tiered and offer additional rewards for subscribed accounts. The current items can be received by logging in:

This event works on top of the skilling spree event that awards skillpoints to players who land the final blow on one or multiple NPCs.

Next on the list is the combat interceptor buff that is intended to land during downtime on October 29. With this change, combat interceptors (Crusader, Claw, Raptor, and Taranis), which have fallen out of use since having their nullification ability removed, are receiving a damage and fitting buff. Throughout the board, these ships receive an additional 5% damage on top of their existing bonused weapon-boost per level, effectively doubling the damage bonus on all ships except the Taranis, where it increases its damage bonus by a third. The Crusader and the Taranis also receive a CPU increase of 10 (7%)  and 25 (20%) respectively.

This change comes at the same time as the Assault Frigate nerf, where the maximum velocity is reduced by 10% for all ships, and where, in addition, the Jaguars power grid and CPU is reduced to make current fits more difficult to achieve. 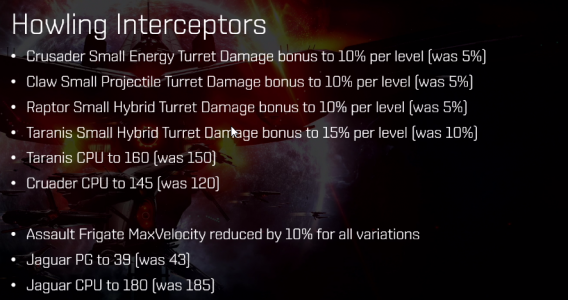 The event’s most interesting change is a guaranteed loot drop from every player and, potentially, every player-owned citadel, killed from downtime October 29 to downtime November 5. CCP claims to have introduced this change to gather data, but the community reception is mixed. While gankers rejoice, other players are more negative about the change. We will see how this change will affect freighter logistics during this time, and also if other battles are sparked over loot.

Accompanying the Halloween event is a thematically fitting SKIN line called ‘Malagrin Marshlight’. The skins are animated with an eerie green glow and are, as such, classed as premium skins. The skin is available for a variety of ships at the premium’s skin high price point: 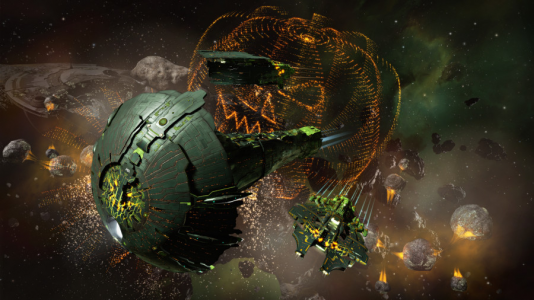