At 21:12 on December 13 the Initiative took 72 pilots up against one of the hardest PvE sites in New Eden. In doing so, they secured the first Guristas Faction Sotiyo kill on Tranquility. The Guristas EC was located in the Great Wildlands system of 0PI4-E. Congratulations to the Initiative and their allies for overcoming the challenges these sites present.

In ironic Imperium fashion the loot, redditor Choridon swooped in as the structure was dying to steal the loot: an Estamel’s Adaptive Invulnerability Field. Choridon wrote up an after action report on the theft, and thanked the Initiative for their efforts. A number of alert commenters have noticed the distinct lack of blueprint boxes in the loot. These boxes normally contain the capital BPCs dropped by the pirate Sotiyos. In the case of the Guristas these are the Caiman, Loggerhead and Komodo. That makes this the first publicly known case where no capitals dropped from the faction Sotiyos. 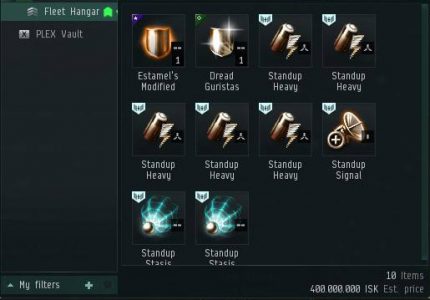 This isn’t the first attempt made by Initiative for the Sotiyo. They made 2 previous unsuccessful attempts on earlier ECs. Local enemies Pandemic Horde and Guardians of the Galaxy foiled those attempts. INIT persevered, though. Once again, Init brought their sniper armor Ravens with command destroyers. The command destroyers’ Micro Jump Field Generators allow Init to jump their fleet around on the Sotiyo grid. This lets them avoid the defending NPCs, who cannot prevent the jumps as the Guristas use warp disruptors instead of warp scramblers.

I personally admire The Initiative’s ingenuity in using Ravens. They have taken their PvP doctrine and applied it to these new PvE NPCs. Their signature Ravens balance damage and fleet numbers, as well as optimizing the time vs effort attacking the sotiyo. Reinforcing and the kill took around 35~ minutes each. This gives Init the fastest recorded time to kill a pirate Sotiyo without using capitals.

Unlike their Blood Raider counterparts, the Guristas Sotiyos occur beyond Guristas space. Previously Guristas ECs have been located in Alamel and XG-D1L. Both of those systems belong to the Serpentis faction. 0PI4-E belongs to Angel Cartel. By comparison, the Blood Raiders remain inside their native space: Delve, Querious and Period Basis. According to the original patch notes for Lifeblood, the Sotiyos “are in and near regions with Guristas Pirates”. Further, CCP developers at EVE Down Under and EVE Vegas predicted Guristas Sotiyos spawning in Angel Cartel space, as well. Thus far, it seems the Guristas’ location scouts are on the ball.

The Initiative deserve congratulations on their kill and persistence with the faction Sotiyo and using such a creative fleet composition. Will CCP rectify the lack of capital BPCs? Was this a bug, or an intended possibility? We will keep readers updated with all things faction Sotiyo-related as more information becomes public.

Neutral EVE Player. Faction Sotiyo reporter and theory crafter. I enjoy being intellectually tested when it comes to PvE content, these faction sotiyos have been my favourite playground since their release in May 2017.

Over the past weekend, PAPI members Fraternity [FRT] a...

EVE Online’s players may be in a particularly vulnerab...

Week 41 was another slow week of structure bashes acro...

The Art Of The Deal

Politics can be a fickle thing in Eve Online.  Co...