Whoever battles with monsters had better see that it does not turn him into a monster. And if you gaze long into an abyss, the abyss will gaze back into you.

The dark allure of space is a dominating theme of the human condition through out history. Staring into the black of night, we ponder if we are alone and muse on our own insignificance. Thus, most space games try to incorporate at least some aspect of travel through the unknown, looking to discover new and profitable places, resources for exploitation, or things in need of protection.

EVE has some of the most dynamic and viable exploration content of any space sim. The different avenues of exploration vary greatly in content, types of activities, and even the amount of commitment required. For example, new players get a sampling of the relic/hacking exploration mini-game as part of the tutorial, and the deep null combat sites and top class wormholes can provide content to challenge groups of veteran players with significant infrastructure and assets.

Since the exploration revamp last year, there are a million guides, videos, and classes around on the subject. Most of them are very good at getting the information across. Most of them cover the subject in all its technical glory, and a few even offer advice for what is good and what is bad for making a career of exploring. This is not one of those guides.

Instead I am focusing on how to make a scratch player able to hit high- and low-sec data/relic sites in as short a time as possible. To that end, we start with our ship: what kind of equipment will be needed to be able reliably to get out there, find the goods, and get out again? 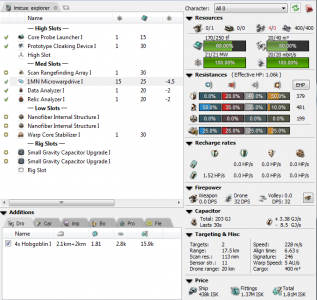 Our starting exploration ship is an Imicus, a Gallente T1 frigate

All in all, this most basic of exploration frigates costs a bit under two million ISK and covers all the bases to really get started.

Let’s get started. Meet Dorah, a brand new Gallente citizen eager to experience the joys of exploring. Training Miss Dorah to be able to get into the aforementioned scan ship and begin working took a little under 48 hours. Here’s how I did it.

Doing the beginning tutorial gives the truly new player a quick breakdown of basic flight and combat controls, and then sends them off to the training school for a series of focused tutorials. The first tutorial I did was (obviously) the exploration tutorial. This is a five-part series of fairly quick missions that sends our intrepid explorer out to learn the basics of finding and accessing the different types of sites available. The completion of these sites nets you several of the skill books needed for your training plan as well as a free Imicus hull. Pretty sweet. It also gives some civilian scanning modules, but they are pretty much worthless for anything but the training simulator versions of the mini-game. As such, your first priority is to get the hacking and archaeology skills to level one so that you can use the real versions of the scanning modules in relic/data sites.

Unfortunately, doing the exploration tutorial doesn’t even take an hour, so you still have a full day before you can even start exploring. So why not do the other tutorials? Taking another couple hours to do the basic and advanced military tutorials gets Dorah several more frigate hulls and several other important skill books. This is in addition to about a million ISK or so in rewards and bounties, all of which will be needed to finish fitting up our Imicus and rounding out the skills required.

With only about three hours into training and lots of time to kill, Dorah set out to do some combat site work. In addition to the probe-down combat sites, high-sec is full of anomalies basically ignored by the native populations. The ISK value is too low compared to running L1 and L2 missions, and there is virtually no loot from them. But since Dorah is an explorer, why not focus on them? By doing the combat training, Dorah then happened to have all the fixings for a modest PvE Atron. 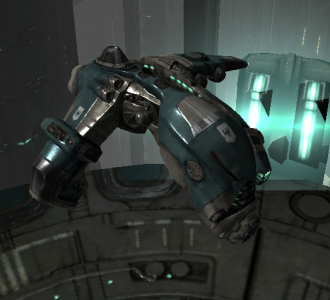 Just staying within three and four jumps of Dorah’s training station, I ran into several different types of Serpentis anomalies. Most of them Dorah could clear until the last wave with three destroyers when she was forced to warp away. But that was no big deal. Dorah got a few bounties, killed some time, and more importantly I was given a renewed taste of what it is like to have a no-skill character who must constantly be alert for situational changes. It was quite refreshing actually; I recommend it to anyone suffering from bitter-vet syndrome. 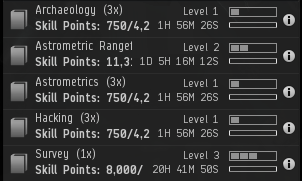 Dorah’s scanning skills to get her hacking ASAP

I chose to front-load the scanning skills: archaeology to level 1, astrometric rangefinding to level 2, astrometrics to level 1, hacking to level 1, and survey to level 3. At least that way the high-sec data and relic sites opened up, and Dorah could start fighting for them. Despite hearing that high-sec sites are highly contested, this was not the case. After about a day of training, Dorah was able to set out and pull in a relic site and two data sites within six jumps worth about six million. Already Miss Dorah was on her way and had covered the cost of ship replacement three times over. Not bad, really, for about 24 hours of training. 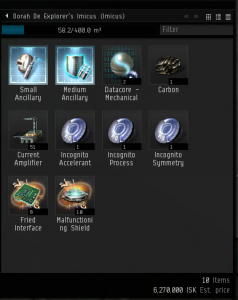 DOING IT RIGHT ON THE LOW-SEC SIDE OF SPACE

Low-sec, however, is another matter, particularly with a name like Dorah De Explorer. It kind of screams “easy kill” on a two-day-old character. Still, I pressed on, and I was able to avoid the locals well enough. I began by creating a couple of safe spots between planets. These safes would be where I would do my probe scanning until I found a data or relic site to start. Once I had a site, I would do my scanning from inside it, scanning while I moved from can to can until I found my next warp point. This is where it pays to become proficient at both probing and the hacking mini-game. The time spent in these sites is the most dangerous for the pilot, so the quicker a site is probed and cleared out, the more likely the chance of survival.

Additionally, in low-sec, don’t forget that everyone is out to get you. Watch d-scan at all times. Look for other probing ships. They may be looking for the same sites you are, but they may also be looking for you. Especially be on the lookout for combat probes. These are almost always looking for you, and you should dock or cloak up if you see them. It is better to lose a site than to lose all you’ve got with you for that trip.

Blind luck also plays a large role. The cans are always random. Regardless of the difficulty of breaking into the can, it could well be empty. I had this happen on a couple of cans, so don’t get disappointed; the loot is out there. After jaunting into low-sec and avoiding a couple halfhearted attempts to probe me out, I ended up with a very tidy sum—over 40 million ISK—for about two hours’ worth of actual playing the probe and mini-game, as well as warping to and from sites and stations. 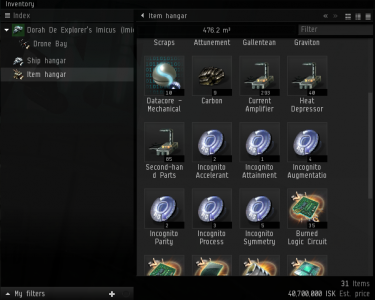 With only two days of training, a character can be made profitable. There is also lots of room to grow. Moving into cov-op frigates, for example, with the appropriate cloak, makes moving around and scanning infinitely safer for a pilot. Higher scan skills make the mini-games much easier and faster to complete. Overall, for any new player who wants to take a bit more risk and get out of the old mission rut, I highly recommend diverting a couple of extra days into exploration. It is fun, challenging, and—by definition—off the beaten path.