A Frigate worth a titan: Whiptail down to The-Culture. 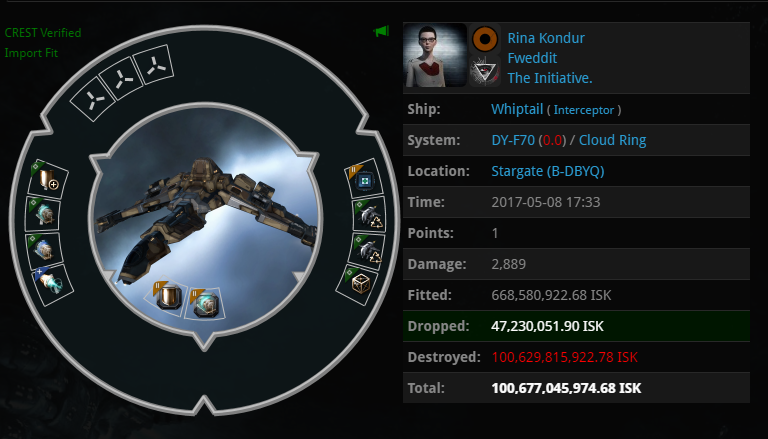 Today’s expensive loss might not be as impressive as the first Vanquisher that died yesterday, but it remains quite expensive… and unusual!

The Whiptail is a very special interceptor. It was awarded as Alliance Tournament XII prize to the four top teams. This Guristas branded interceptor packs a good punch along with everything interceptors need. With a bonus to drones and missiles and a bonus for scrambling and disruption range, this little beast could be a perfect duelist! It even has a bonus to shield resistance but remains an interceptor, for which tank is an illusion. The only real issue being cost: just like every other AT ship, it is valued at 100 billion isk.

Down the rabbit hole

This one was only the fourth to die. The pilot, Rina Kondur from INIT. commented on  Discord that he “Only wanted to fly it a few times and pass it on to someone else”. He later posted that “It was passed on (…) just only 45mil of it”.

It seems that the only kill the Whiptail had before exploding was a velator, on May the third.

We got a talk with Rina Kondur:

INN >  o7
Would you agree to tell me what happened with your Whiptail, and why?

Rina Kondur >  I just took it out for a roam, ran into a culture gate camp. There is sadly no good story to it

INN > And what about the discord capture?

Rina Kondur >  Oh the pass it on comment? I just meant I would eventually sell it again if it lived

INN > And you were just roaming alone, for fun?

INN > Thank you for answering, would you like me to add a message from you? “Famous last words?”

Rina Kondur >  Haha, I dunno, props to culture for the snag I suppose, right place at the right time!

INN > Thank you, and fly dangerous!

Rina Kondur >  I intend to!

As always, INN would like to thank Rina Kondur for answering our questions.