What is Highsec Ganking?

Although the majority of EVE Online players know what highsec ganking is, we will go over the basics for those who have not yet experienced the style of play. There are many ways to conduct ganking, but the general concept is to take a relatively cheap ship with high DPS and attempt to kill another ship within the systems of highsec (0.5-1.0 Security Status) before CONCORD shows up to kill you.

This is normally practiced against miners, haulers, pods, freighters, and jump freighters. The usual ganking ship of choice is the Catalyst, Brutix, or Talos. Occasionally, ganking is done in other ships such as the Vexor or Thrasher, which are used in specific situations.

Top 5 Kills So Far In February 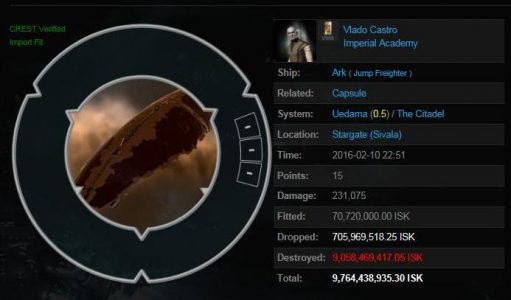 This cute newbro, Vlado Castro, was just four days old when he lost his Ark filled with faction modules and ships. Vlado used multiple Skill Injectors to fill the required skills to fly the Ark. As seen in the killmail, he was flying the freighter without any modules in his lowslots, leaving him open to attack from the suicide ganking teams CODE and Miniluv. 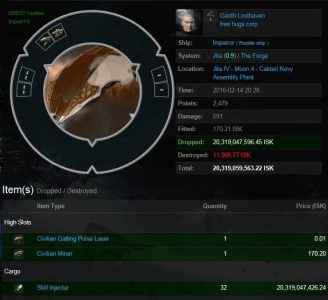 Stalina, of The Holy Goat, suicide ganked this Impairor holding thirty-two Skill Injectors. The 20.3B loss is probably a little more expensive now that injectors are reaching 700m ISK in some places. Stalina also killed a nearly 2B ISK Impairor that day prior. That newbship was carrying just three injectors in his cargo.

While we are on the subject of expensive newbships, this 500M ISK Ibis was ganked in Heimatar with twenty-four RSS Core Scanner Probes. 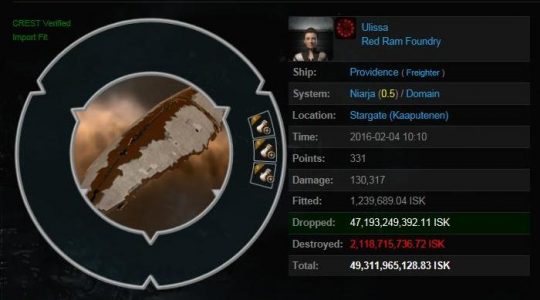 This nearly 50B ISK freighter was ganked by The Imperium’s ganking group Miniluv. In his cargo were the materials required for creating faction cap boosters and/or faction 1600mm Steel Plates. In his low slots were cargohold expanders which made it all too easy for Miniluv, as they reduce EHP. 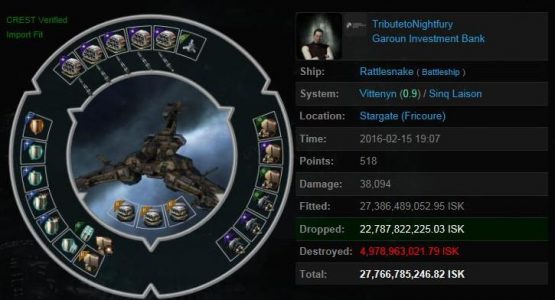 Korean gankers in six artillery-fit Tornados ganked this nearly 28B ISK Rattlesnake in highsec. Korean Ninja, who is second in damage on the kill, is by far the most famous Korean highsec ganker in all of New Eden. He and his team also killed an officer-fit Golem last August worth 15.4B ISK at the time, but is currently worth over 20B. His killboard is littered with wonderful kills in highsec and his ISK destroyed has reached over 1.21T ISK as of today.

ALOM: 52B ISK Tengu Dies in The Citadel 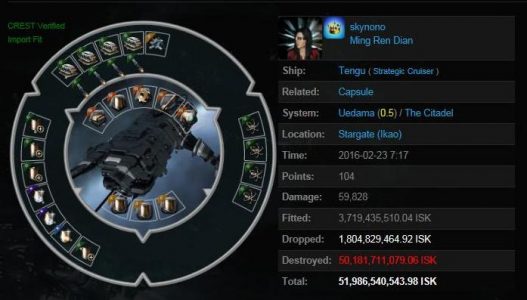 TMC reached out to Miniluv members for comment on this amazing kill. His fit alone does not answer for the 52B ISK; however, the 40 PLEX in his cargo does.

“We had a joint CODE. / Miniluv fleet going and then suddenly our scout suddenly goes crazy, screaming “Holy shit! 40 PLEX in a Tengu on autopilot!” We took a run at him in thrashers and cats, but failed, leaving him at about 20% shield.  He’s totally AFK during this entire time, so he didn’t notice and he was still on autopilot. We keep him bumped to prevent him from jumping, he comes back to keyboard and warps to station and docks. We assumed we had failed and cried a bit about it. Sixty seconds later, I shit you not–he undocks again and goes back on autopilot. We go heavy and drop a metric crapton of Taloses on him, and the end result was that wonderful kill. It made my night, Karmafleet Is Recruiting is my alt and I scored top damage on him.  My second biggest gank ever.”

There are too many suicide ganks in highsec to count. It is, in my opinion, something that everyone should experience, and if this style of play appeals to you, contact either of the groups to get in and give it a shot. May your killboards stay green and may the ganking gods shine on you, so that the tears of highsec haulers run like the ancient rivers of Babylon.

This article originally appeared on TheMittani.com, written by Lemba.