After a particularly bad day, with a grand total of 4.6b ISK lost, I briefly wondered why the hell I play this stupid game. But that wonder was short lived. I know exactly why I play EVE.

I doubt that the reason each of us plays this game can be articulated in the same way. For some, the community and social aspects predominate. For others, a feeling of power and accomplishment are the most important. For all, though, I suspect it’s a form of escape from the stresses of our respective lives. In addition, for each of us, there’s an element of addiction.

Let me be clear. When I say addiction I don’t mean it in a judgmental way. As a physician who specializes in human behavior, mental health and addictions, my purpose is to help others create more regular happiness in their lives, and improve their functioning as social, working and loving humans, while safeguarding their health and that of the public. From that perspective, part of the reason we play EVE is that it’s designed to be addictive. On the whole though, EVE is historically less ‘designed to be addictive’ than most other popular games. At least it was before the official, and blatant introduction of gambling. To understand this, an extremely basic discussion on the neurobiology of addiction is probably necessary.

The brain is the most complicated object known to man, and our collective understanding of it is rudimentary compared to its complexity. However, our knowledge is increasing exponentially with modern investigative methods and better research funding in recent years. Our understanding of happiness and pleasure has increased enough over the past few years that “it’s dopamine, dopamine is the pleasure chemical’’ has found its way into common parlance.

Someone on Theta comms last week even made this statement with such self-assurance that I didn’t comment so as to not rain on his parade. Similarly, serotonin is considered the ‘’happiness’’ neurotransmitter. Some experts are pushing to no longer call serotonin and dopamine, and similar molecules, neurotransmitters, but rather neuromodulators given the very limited percentage of neurons in the brain that respond to these chemicals.1  So what does dopamine do in regards to ‘pleasure’’ directly? Probably very little. Indirectly, well that’s anyone’s guess and becomes more of a philosophical question. Let’s stick to what we think we know.

Dopamine is really responsible for the feelings of novelty.2–5  Essentially, dopamine is triggered by novelty – activity that people find interesting or pleasurable. And the result of this feeling? Motor activity, a.k.a action. In the case of EVE, when you find something new in EVE, you play more EVE. Cocaine and meth users do more stuff, essentially everything, but of course that’s complicated by the stimulant effects of the drug (not mediated by dopamine per se). Ecstasy (MDMA) makes people dance, touch … fornicate. Heroin addicts as well however, display increased activity after the initial effects of the sedating drug wear off.3,5,6

A late opiate addict essentially spends their entire existence seeking out and doing heroin entirely to avoid withdrawal, and doesn’t often get ‘high’ anymore. Marijuana doesn’t increase dopamine significantly, thus its general lack of increasing someone’s action, aside from watching movies and eating I suppose, and they have little to do with dopamine. As for the more common favorite, pleasurable activity – sex – this is further supported by the regular phenomena of decreased pleasure or interest in sex the longer we stay with one partner. Things just aren’t new anymore, and if they aren’t new, they’re perhaps less pleasurable. Keep in mind this is a reductionist view of quite complex human behavior.

Bear with me a bit more on the science as there is another factor here. Behaviorism – the late 20th century model of aspects of human behavior – established what makes something the most behaviorally (not chemically) addictive to mammals. This website does such a great job explaining this that I’m just going to borrow it: “In a variable-ratio schedule, the number of responses needed for a reward varies. This is the most powerful type of intermittent reinforcement schedule. In humans, this type of schedule is used by casinos to attract gamblers: a slot machine pays out an average win ratio—say five to one—but does not guarantee that every fifth bet (behavior) will be rewarded (reinforcement) with a win. All of these schedules have different advantages. In general, ratio schedules consistently elicit higher response rates than interval schedules because of their predictability. For example, if you are a factory worker who gets paid per item that you manufacture, you will be motivated to manufacture these items quickly and consistently. Variable schedules are categorically less-predictable so they tend to resist extinction and encourage continued behavior. Both gamblers and fishermen alike can understand the feeling that one more pull on the slot-machine lever, or one more hour on the lake, will change their luck and elicit their respective rewards. Thus, they continue to gamble and fish, regardless of previously unsuccessful feedback.”

Visually depicted, where response is correlated to EVE activities, it looks somewhat like this: 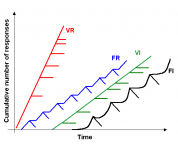 Risk vs Reward in EVE

The above paragraph explains, in part, EVE’s miners, explorers, ratters and PVEers. The miners and PVEers are responding to a predictable fixed-ratio schedule, they get paid at regular intervals and mining or PvEing more improves their payment reinforcement. The PvPers, explorer’s and gamblers are responding to the most reinforcing schedule known, the variable schedule, where their rewards are unpredictable. This makes people play more, risk more, spend more.

This tells us a lot about the demographics of EVE players. PvEers may have a lower threshold for reward — perhaps more dopamine for less reward — potentially than thrill seekers. But the response to novel behavior likely developed as an evolutionary strategy to explore. That’s certainly what we see in mouse experiments – exploration can lead to food sources, safer environments, new mates and is in general helpful for some members of the species. It exposes one to danger though, and consequently a balance in behavior is needed for a functioning society. We need our risk adverse homebodies, as they settle and create civilization, structure and stability. We need our ratters to supply content for the PvPers. We need our miners to support the economy.  Game creators must balance their content and provide novelty and risk. They must make playing the game more rewarding and they must constantly change things. If they don’t, people get bored (see ‘bitter vets’ and ‘winning EVE’).

So What About Addiction?

Turns out ‘addiction’ is pretty hard to define. Ask three people on the street what the definition of addiction is and you’ll likely get three different answers. The extreme examples are often clear.  The person who does heroin and nothing else, is probably an addict by most definitions. The person who has a drink on holidays, but not ever else, well clearly not. Do you judge it by volume? By dysfunction socially or legally? Is someone who drinks 20 alcoholic drinks a week an addict by default? What if they have ~3 a night, don’t get drunk, work a stable job, don’t drink and drive and are a wine steward by profession? Would it change if they lost their job because of it, or their spouse left them? Would it change if they were functional in social and professional areas but developed serious disease from alcohol use, such as alcoholic cirrhosis, cardiomyopathy or Wernicke-Korsakoff encephalopathy?

What about the 100-pound freshman sorority sister who gets wasted once a week and makes really bad decisions? Or the guy who has five drinks, but drives home drunk from the bar and gets into an accident just once? Twice? Three times? Is it based on the drug itself? What about the guy who does meth once a month for sex with their partner, but has a stable job, home life, marriage etc? Are they a meth addict? What if it was heroin? What about the college student who smokes weed every day, but gets good grades? What if they get bad grades? Is it addiction then?

What if there is no substance involved? What if the person plays games for 10 hours each day and doesn’t work, doesn’t socialize, doesn’t exercise and eventually dies from playing a game for five days straight?7,8 Is that addiction? If so, what is he addicted to exactly?  Gambling in the game, the social nature or community of the game, the self-esteem or validation the game gives him. In fact, these questions are hard enough that psychiatry is fairly agnostic about them. But in clinical practice they come up often, and sometimes are extreme. These reactions, the marked distress when the object is taken away, anger, dysphoria bear a striking resemblance to someone biologically addicted to a drug who loses access to that drug.

The writers of the Diagnostic Statistical Manual (DSM, the international classification of mental illnesses to guide standardized diagnoses and effective evidence-based medicine) did not include a ‘gaming addiction’ in the latest iteration of the manual. They thought about it a great deal though, but a history of retrospective mistakes prompted an abundance of caution (being gay was once a disease listed in the DSM for instance). ‘Internet addiction’ was considered, but ultimately not included because it wasn’t clear if the internet was the problem itself, or merely a vector. And if it was a vector for gambling, which has known effective treatments, then what would be different for the same diagnosis. A recent political wrinkle has been the inclusion of ‘gaming disorder’, but this is odd because experts on the subject don’t agree that it exists or what the term means (yet). But our ambivalence has a limit, the public — most often parents — wants a name and an answer to something that is an obvious and potentially increasing concern.

Gaming addiction is certainly a real phenomena, it’s just hard to describe precisely, and thus effective treatment relies mostly on prior models of addiction that relate to gambling, substance use, and behavioral addictions and therefore is likely an imperfect substitute. EVE players reinforce the gameplay of each other, and each person has a reason for why they play the game. Condemning someone for their play style is rarely productive. To quote a famous historical figure: “Life is suffering. Why be anything but kind?”

Note: This article is meant purely for educational purposes and is not meant to treat or diagnose any medical condition. If you have thoughts about wanting to harm yourself or anyone else, please seek professional assistance! Depression does not last forever. We can help.