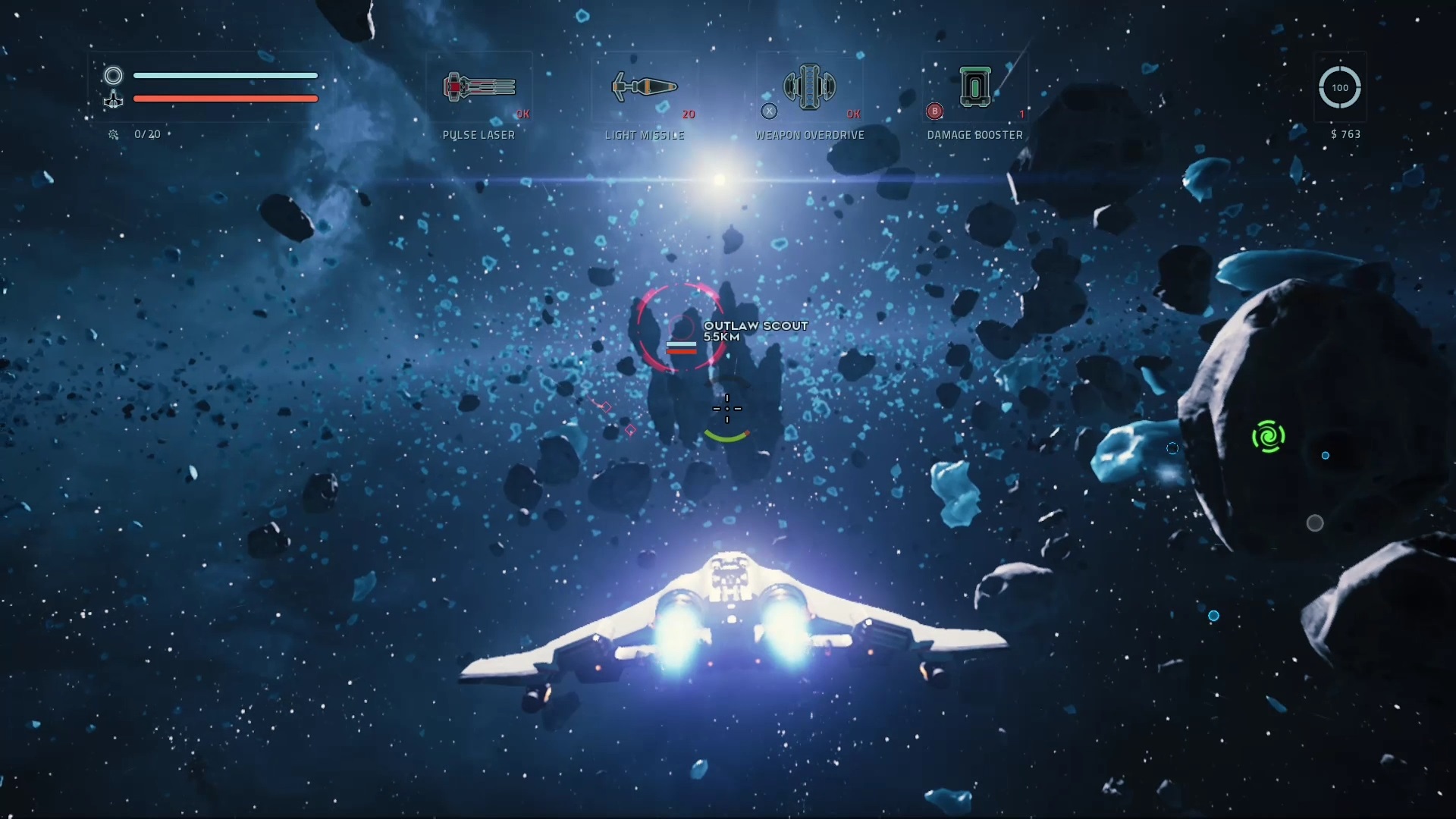 I knew the moment I started playing Everspace that I wouldn’t like it. And, after hours of play, I’m still only lukewarm to the concept.

With that said, ROCKFISH Games has done a fantastic job crafting a space arcade shooter with roguelike elements that should appeal to a very specific type of gamer.

In college, I had a friend who was a beast at playing games like Star Fox 64 and Star Wars: Jedi Starfighter. These were the arcade space shooters that stood parallel to titles like X-Wing vs. Tie Fighter, Freespace, and some of the later Wing Commander titles. And for fans of arcade space shooters, Everspace should provide a fairly hefty serving of nostalgia with its gameplay.

For some, that’s exciting news, but for players who prefer the more involved space sim titles (like me), it’s a harder sell.

One of the most immediately apparent issues with Everspace is the lack of controller customization. In an age where most console games (I played it on Xbox One) offer a litany of options, with some more recent games allowing button by button customization, Everspace takes controls back to basics.

Players are only afforded the option to switch joystick controls or swap between yaw and roll, but that’s it. At a basic level, there isn’t really any need to further customize the controls; what Everspace provides is good enough. For players that have become spoiled by the ability to intimately define a control scheme, however, this will prove remarkably frustrating. More than once, I had to quell the desire to toss my controller because of the inability to customize inputs to mirror how I would normally configure space sims.

Note: Controls are individually remappable on the PC version, but it is somewhat telling that the very first thing you see loading it up is a recommendation to use mouse and keyboard.

And even after hours of play, I still find the controls inadequate to enjoy everything the game has to offer.

Two Sides of the Coin 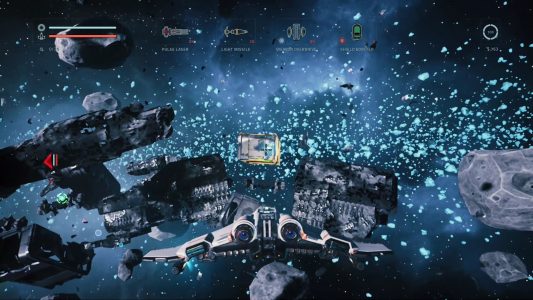 From a high level, Everspace functions much like FTL. But, unlike FTL, the encounters in each system the player visits are far less structured. While there is still a need to carefully consider each possible action by weighing the pros and cons of exploration, piracy, and combat, none of them are much more than disjointed random encounters. Exploration typically boils down to shooting asteroids, wreckage, or containers to collect items/money. Enemies function in much the same way, though the make you fight for their loot. NPCs are also present in most areas. They can be preyed on, but fight back with the same ferocity as any other enemy you encounter. Or, if you’re terrible at combat (like me), they can be useful tools to bait into doing your dirty work for you. 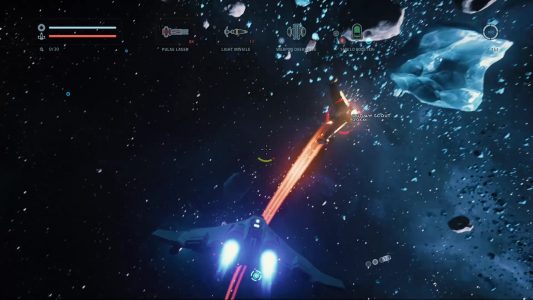 Unfortunately, most of the variety of exploration and combat that Everspace has to offer is expended within the first few hours. And I’m sad to say that nothing the player comes across is presented with nearly as much charm as the random encounters in FTL. In fact, after a while, exploration defaults to rote repetition and combat to dizzyingly frustrating encounters that end in death.

And, though the game constantly pushes you forward, death is an inevitability.

Everspace counts how many times the player has died and displays it prominently on the screens between each run as a reminder of successive failures.. 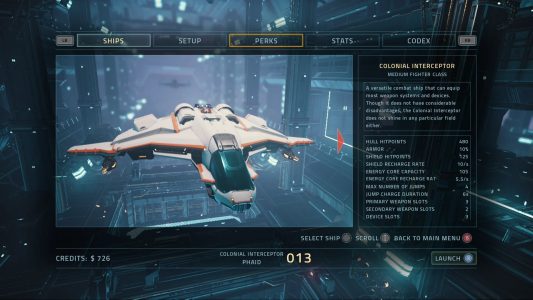 But there is a glimmer of hope.

During each run, the most important thing the player collects is money. After dying, it can be used to purchase perks (and ships) to aid the player in the next rush towards death. The only caveat is that money not spent is lost. At the beginning, this isn’t an issue, but since perks gradually increase in price as each rank is purchased, players have the potential to eventually hit a wall where they aren’t collecting enough money to buy the next level of a desired perk. 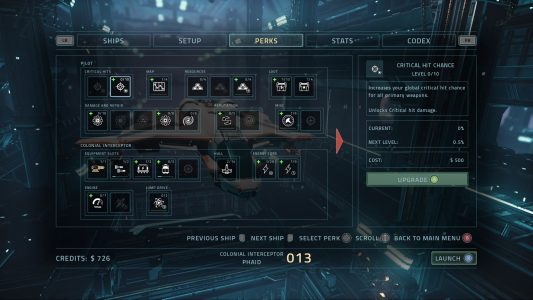 Note: There’s a crafting system in the game, but it doesn’t feel like much more than an afterthought. During each run, materials other than money can be crafted into weapons and items, but I rarely collected enough – or survived long enough – to make effective use of the system.

I didn’t often run into this issue, but sometimes the RNG was feeling less than kind and I was blessed with system after system of countless enemies bent on my destruction.

And the counter increased. Sometimes after only a minute or two of much wailing and gnashing of teeth as I was burned from the sky by an angry wing of outlaws. 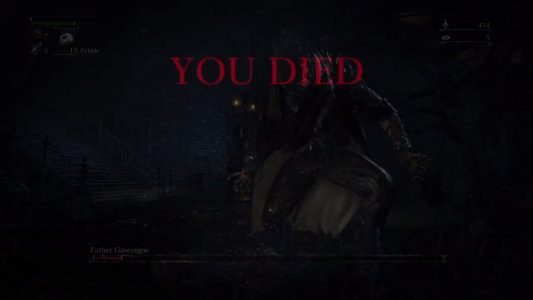 I bought Bloodborne when it dropped on PS4, and I think I will always remember my first few hours with that game. Nothing will ever compare to the brutal punishment of its earliest area. And while those few hours were possibly the most frustrating I’ve ever experienced, it clarified the adage so often associated with the series.

To a degree, Everspace foists the same idea on players brave enough to stick with it. And while I’m getting to the age where that mantra no longer appeals to my gamer’s ego, I can still appreciate the thin line of demarcation that divides those that can and cannot forge a path forward. I lie somewhere in the middle, but mostly because I’m stubborn.

Either way, sticking with Everspace long enough to forge past initial frustrations begins to paint the game in a far different light. Control difficulties aside, combat becomes a much more tactical consideration – a trade off between what is expedient and what is advantageous for the player. Wading into a battle with more than one combatant is likely a death sentence, but it’s meant to be. After all, stacked odds are just that.

Learning and understanding this thought process is the key to success in Everspace. Its own brand of the, now legendary, axiom.

There is a single player campaign of sorts, but it’s delivered through short cutscenes at the beginning of each sector. Past that, the main character banters occasionally with his ship’s AI. While the story is somewhat intriguing, the short scenes are so few and far between (due to player death) that it’s easy to forget what was revealed before.

And while some of the banter is directly related to the story or reveals interesting information about the game world, the rest is scant boilerplate speech that serves to fill the monotony of flying from resource cache to resource cache. Or to taunt the player during less than stellar combat performances.

Overall, the addition of a story is nice, but probably not the main reason for playing a game like Everspace.

So, we come full circle.

Everspace makes good use of roguelike elements, but I’m not sure this twist on the genre, or a return to arcade roots, is enough to entice more than the most ardent fans. For me, I can see glimpses of the things I like about space games here, but none are fully realized. On one hand, I’m missing the fully fleshed out space combat evident in games like Elite Dangerous or Eve Valkyrie (which I have yet to play). And on the other, exploration pales in comparison to games like Avorion or even No Man’s Sky (for all of its many failings). 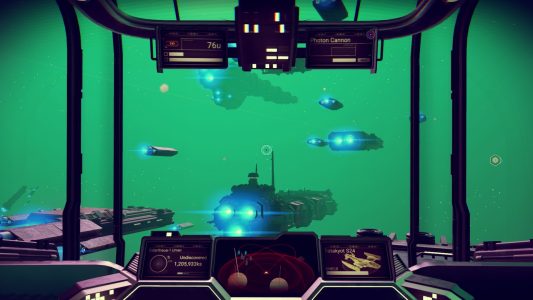 And therein lies the rub.

Everspace is definitely an intriguing idea, but at $29.99, there just isn’t enough here to pull me away from similar titles – many of which are also cheaper. And for those others that aren’t, there is more than enough additional content to bridge the gap.

At the end of the day, this one is going to come down to personal preference. If you’re interested in something far more involved, it might be better to stick to a few of the titles mentioned above. But if you love old school arcade shooters and have been looking for something new to cut your teeth on, Everspace is the game you’ve been waiting for!

You can check out our Early Access look at the game here and for a video introspective, check out Scott Manley’s review piece here.