CCP Lebowski covered new navigation structures at Eve Vegas today, as well as future plans for Upwell structures. He also reviewed the new war dec system and the challenges it faces, and what CCP feels that war decs should be in their updated, final form.

CCP Lebowski is part of Team Five 0, a team that focuses on large features in the sandbox, game health, and quality of life (QoL) updates of little things that improve game play. One of their major objectives is to improve structures by reducing the number of structures in the game, such as removing player owned stations (POS) and replacing them one-for-one with new Upwell structures. It’s the aim that Upwells will provide the same benefits structures provide but with better features.

The new range of Fast Logistical Expansion (FLEX) structures are limited in services but do their job well. 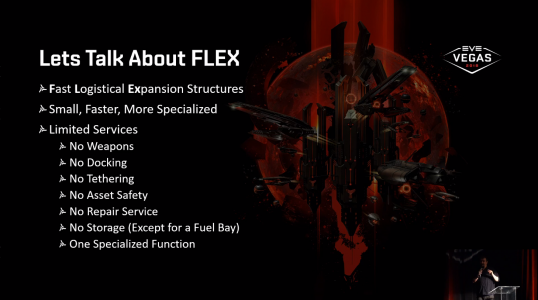 When deploying you only set a reinforcement hour, not day. This means that the most that a FLEX structure will last for is just over a day. It’s possible to hack and get the hour window and plan your attack to hit the shield so that the structure goes into its valuable window late on and is able to be destroyed. FLEX structures are like ships. You board in a pod, leaving your ship behind. This puts you in the driver seat allowing to set up and online. If the structure is in low power it will have no reinforcement cycles and will simply die if attacked. Also, FLEX structures can be destroyed during their online operation at all time and will range from minutes to hours depending on where they are being deployed.

Attacking an online structure you hit both the shield then the armor before the reinforcement timer starts and the service is switched off. The module is pre-fitted to the structure like a rig, it does not drop on its destruction. They are destroyed if the Ihub upgrade is disabled or destroyed. FLEX structures are for null only for now. There are plans for POS to be removed by 2019, the issues around niche gameplay restricting this first.

Cyno Beacon & Jammer
The new beacon and jammer both work very similarly to the way they currently do, with the added features of a ACL. 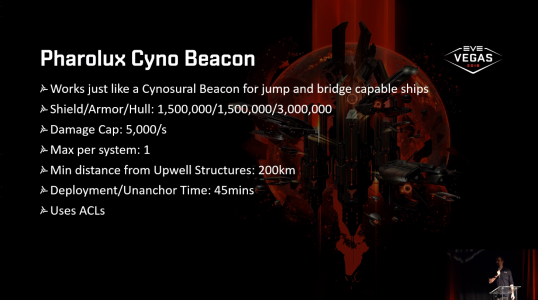 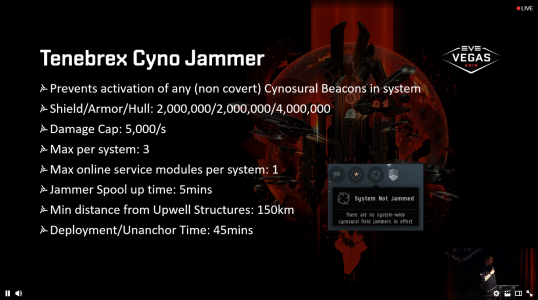 You are able to have one beacon, but three jammers per system. This means that one jammer can be online with two offline on standby. However, an aggressor can blow up the two on standby first before attacking the online jammer. They can also, conceivably, anchor their own to prevent the anchoring of more defensive jammers.

The new jump gates will also work in a manner very similar to the current jump bridges. Their range will be limited to 5 light years, but they can be anchored within the weapons range of extant citadels. 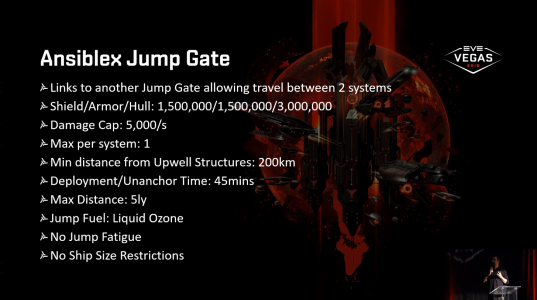 There’s going to be a tax per unit of Liquid Ozone allowing owners to adjust the cost of the jump bridge. All ships are allowed with no jump fatigue, but this writer believes that will change.

Stargates have also had a face lift with banners showing off the security level that you are going into as well as any extras, such as if the system is under heavy traffic or whether it’s seen a high number of kills in the last 30 mins.  CCP stated that this was all publicly available information already from 3rd parties so it just brings it into the fold in this part of the November release.

INN will continue to report on these upcoming structure changes with analysis and any further news prior to their release.

Editor’s note: A previous version of this article stated that jump ranges would be “reduced to” 5LY relative to POS jump bridges.  It has been brought to our attention that this is the same range bridges have always had.  The article has been updated to reflect this.