At this year’s EVE Vegas, CCP Rise presented the Ship & Module Balance Panel, giving players a taste of what CCP has planned for the Winter Expansion and beyond. The offerings ranged from rebalancing Force Auxiliaries to brand new Triglavian ships and new mutaplasmid options. The next iteration of the ECM changes is also on the way and Rise even hinted at upcoming changes to the Navy hulls.

The Triglavians will have a massive expansion to their lineup, with four new ships. This marks one of the largest batches of new ships in recent memory, especially for a single faction. The line-up is expanding to include a destroyer and a battlecruiser, as well as the second Triglavian cruiser design. This one is the Zarmazd support cruiser, but that’s not all. CCP is releasing the “First Non Empire Tech 2 Ship”: the T2 Logistics Cruiser version of the Zarmazd. Both the Zarmazd and its T2 cousin, the Rodiva, will use existing remote repair modules (presumably armor) with a Triglavian twist: the longer they’re running on a single target, the more effective they become. 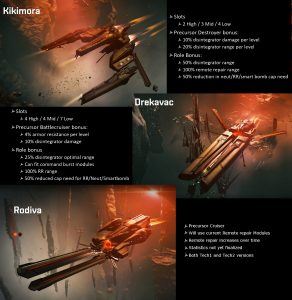 Where are the Materials?

With four new blueprints among the Abyssal Deadspace resources, how are these new material demands going to be balanced, particularly if CCP is saying they want the price of Precursor ships to come down? CCP has two ways to achieve this. The first is through Fleet Abyssal Deadspace; fleets of up to three frigates can enter an Abyssal Deaspace pocket with three times the loot. The second method, announced today, is Triglavian Drilling Platforms.

Triglavian Drilling Platforms will be structures inside Abyssal Deadspace, found on asteroids within the Abyssal pocket. A player can destroy and loot the platforms to collect extra resources. They must be careful, though: killing these structures will take time. And in the Abyss, time is precious, and the 20-minute timer will stay the same, platforms or no. 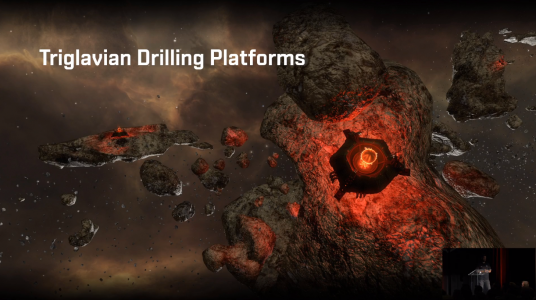 Capsuleers have requested Weapon (Turrets and Launchers) Mutaplasmids since their  introduction. Due to the effects of Mutaplasmids not being uniform, one of their key attractors, grouping weapons wouldn’t be possible. Disintegrators are used solo, making the grouping issue mute. Therefore, CCP announced Mutaplasmids for disintegrators, but wait, Mutaplasmids for damage mods are coming too! Up to a 20% increase to damage and rate of fire (ROF) bonus for unstables. No data on the potential downside rolls.

ECM Bonused Ship will receive the following buffs with additional changes to come in the future:

In mid July, when CCP posted their proposed FAX Balance changes, the community quickly alerted them to the fact that CCP wasn’t taking the entire player base into consideration. Listening to the requested feedback, CCP placed the FAX changes on hold to get a better understanding of the needs of capsuleers. This time around, they laid out a better picture of the problems Force Auxiliaries bring. 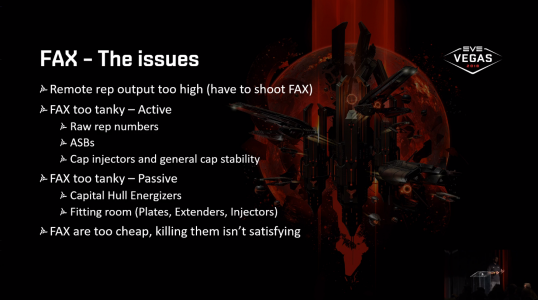 In order to address the problems with FAXs, Rise unveiled a new set of changes the balance team had worked out. CCP Rise did say, however, that capital ships, from FAXs up to Titans, represent a complicated set of difficult problems. It may take time to fix them all.

CCP Rise expects a devblog and forum posts to come this week.

The Hurricane Fleet Issue is at a fair usage level, but the rest are under-utilized. The balance pass for Navy ships, though announced earlier at FanFest, has been delayed, as CCP’s analysis reveals that more than just the battlecruisers need attention. As a result, Rise expects the planned overhaul of Navy ships to include the whole range, from frigates to battleships. Some possible changes mentioned included stats based on standing, but the observers seemed unenthused.

Mobile app developer full-time, and writer in between. Mostly, I run around New Eden and generate content for others.