The Eve Help Channel: What is it Good For?

When the Ascension patch released a few months ago and brought Alpha Clones into the fold, I wrote my first article and created a Discord group from that idea called “EVE an Hour”. While the server never really caught on because of ISD insisting that I was not allowed to advertise my help in the official help channels in EVE Online, I still continue to do my part in the English Help Channel. Over the past few weeks, however, I have noticed that my help has become less helpful than I hope for. This is not for lack of trying on my part, nor is it because of a lack of knowledge on a particular subject, but instead, they turn away my help because of the culture that we as the community have bred into the player base.

Trust no one is a mantra that you learn from day one in EVE Online. From the very first moments in New Eden, a player hears things like “Only fly what you can afford”, “Don’t undock unless you plan on losing your ship”, and of course that everyone you speak to in chat is a spy or scammer. This has unfortunately crossed over into the English Help Channel where a Friday or Saturday night has little to no assistance from an official ISD or GM. Disgruntled bitter vets mocking and belittling new or returning players is what we have left. It seems that for every one player that I actually engage and help, I have 10 more to step up to the plate and accuse myself or other players actually helping of bragging or being scammers.

Yes, that actually happened one night. After nearly four hours of helping new players with questions about many topics, players accused me of bragging because, from 0315 to 0654 on the 10th of March, I mentioned that I was running for CSM and that I would appreciate their votes if they felt I had been helpful to them. A player told me that asking for votes was “pretty rude imho” and that many other players help but “don’t brag about it”. For some reason, it seemed clear to a few players that I was on a “high horse”. Someone told me that the Help Channel was “not the bragging channel”. I finally logged off that night after four hours with no input from any ISD. Keep in mind, this was a Friday night between 10 PM and 2 AM Eastern time, which some might think is a popular time for new players to get in the game and ask questions.

This past Friday, March 17th, was no different—someone called me an idiot in the first 5 minutes of logging in. One particular player decided that he would use the Help Channel as his personal soapbox to preach about how President Trump is Hitler. For hours. Wisely seeing that this was going to be his modus operandi, I banned him from my view and instructed others on how to do the same. Most people at this juncture actually seemed to agree with this tactic regarding this guy, but some chose to continue to feed the trolls. Only after about two hours (from when I logged in) did ISD Stall finally step in and began warning this individual about political talks. In typical fashion of the type of person I am assuming to be very anti-Trump and super liberal, the warned player felt he was being targeted and tried to play the reversal to the ISD, asking about filing a report. Smooth move, Casanova.

Not to be discouraged from the previous night, I returned to the game on Saturday night and checked into the insane asylum that is the Help Channel to see that our favorite troll was back and at it again. I had him blocked but others hadn’t taken the cue yet—judging by the comment from another player of “name redacted really? you gonna start this $#!* again?”. Luckily on this night, there was some good question-and-answering going on among most of the folk in the channel. I was able to get a fellow military jarhead into the EVE Best of Us community; it’s always a good thing to feel like you have accomplished something in this chat channel.

Unfortunately, my feeling of success didn’t last very long as players again accused me of trying to sound smart by being one of the few people who actually contributed with “help” in a help channel. Nevertheless, for the three hours that I logged in the Help Channel, no official ISD members or GM’s arrived that could help keep the cats herded and on-topic. This was a Saturday night, which according to EVE-Offline.net, is the most active time on Tranquility. Why wouldn’t there be any ISD or GM’s in the help channel then? 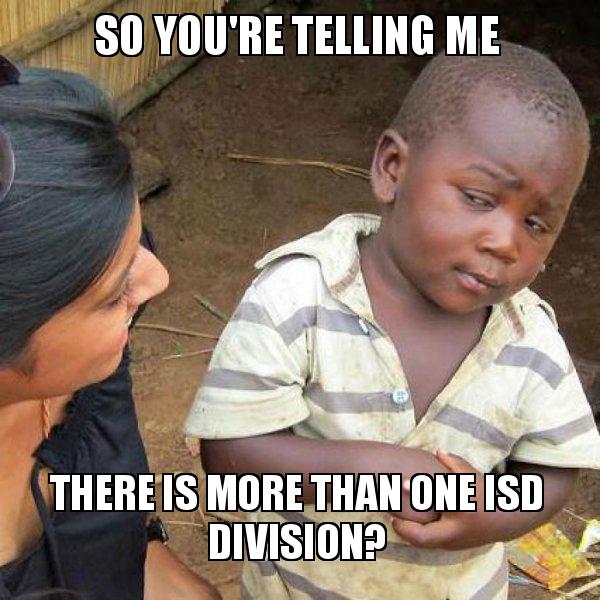 Six specialized divisions of volunteers make up the Interstellar Services Department assisting CCP in various activities. Whether it is forum moderation, bug hunting, lore archiving or helping new players as they venture through EVE Online, these players give up a bit of their playing time to lend a hand. The problem with this, however, is that it relies on people to actually volunteer their time to actually do it. According to a Google site, there are 18 volunteer members in the Support, Training, and Resources (STAR) Division. The member that I see most often in the Help Channel, ISD Stall, joined this year. While I am unsure if this means Stall has only been playing the game for a matter of months or if he is an older player who recently started in the ISD, it’s a sad state of affairs that this person is the backbone of the corps of Bob’s little helpers.

Players know that CCP typically relies on players to not only create content but also for educating and helping other players learn and navigate the game. Search YouTube for EVE Online, browse the gamers playing EVE on Twitch, or do a web search. You will find mountains of videos and blogs about how to do one thing or the other produced by players. In fact, it wasn’t until two years ago that the developers decided to introduce the Flight Academy with roughly two to three minute long videos to explain and show certain aspects of the game. As much as I would like to appreciate this gesture of edutainment from our devs, they are a bit late to the game—even when it comes to their own latest features. They only put two videos on Alpha and Omega clone states four months after the release of the Ascension expansion that introduced this game-changing update.

Further, many players old and new, often forget about or don’t even know about these videos found by pressing F12 in-game. If by some chance a new player does happen upon these hidden gems, he or she will quickly learn that much of content is outdated or that something they want to know about simply doesn’t exist there. Take for instance the drastically changed Character Interface that has the Skill Queue melted into it. A returning player coming back with a free Alpha Clone will likely find this new system quite daunting, as even the most active of players did. A video explaining this change would certainly have been helpful. That’s okay because user JonnyPew has that covered.

As most players new and old quickly figure out on their first steps and (hopefully) continuous journey through New Eden, if you want to learn how to simply PLAY this game in a basic manner you will have to search external resources. It’s hard for me to imagine having to start playing another game if I knew the “learning cliff” was to be as steep as EVE Online. To top it off, I find it quite discomforting knowing that a volunteer organization in the game supposed to be helping players on this long and arduous journey aren’t active during some of the most active hours for the typical capsuleer. I for one am not convinced that CCP has the best interest in the longevity and future of this game at heart and will slowly discover that bored bitter vets litter their player base. Without fresh pilots to fill the ranks, this game we love so dearly will see a slow and painful death.

This, my lovely readers, is why it is up to us to recruit and train the young and the bold. Get into the help channel in any language that you can fluently speak. Create a new Alpha and learn the ropes again so that you can lend your knowledge in Rookie Help. Until CCP can see that their flagship title won’t make it past a second decade unless they put more focus on marketing this product to a new audience and giving them better tools to learn to fly with the best, it’s up to us.

Kael Decadence is a host of the Mind Clash Podcast, the head honcho behind Project "EVE an Hour", and a member of the Entropy of Annihilation corporation in EVE Online. In real life, Kael is an active duty Soldier in the U.S. Army and has 6 chickens. Real ones.