ELITE DANGEROUS: GETTING STARTED WITH ENGINEERS 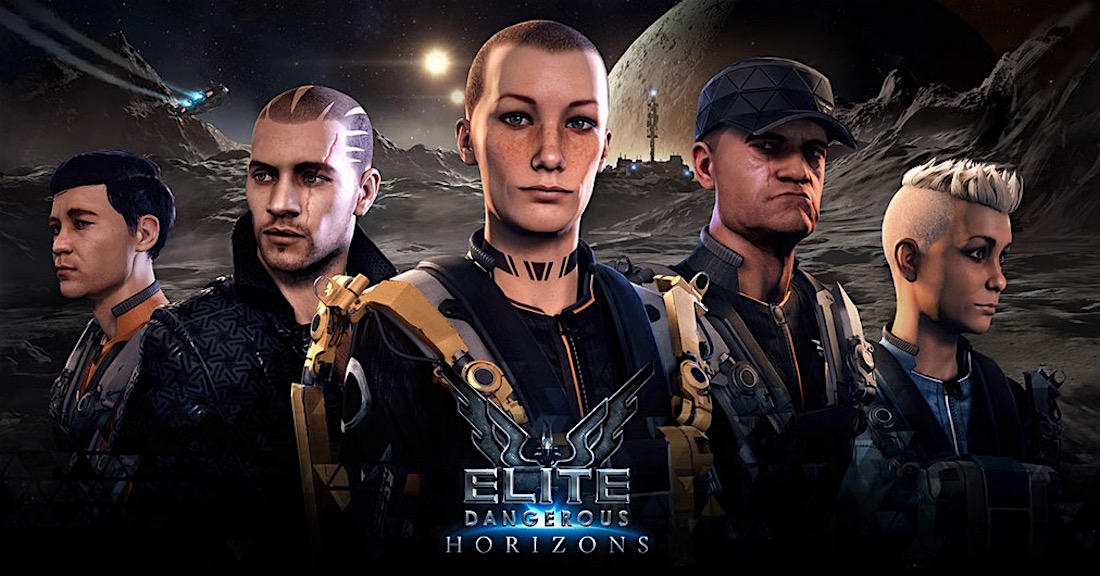 The latest update to Elite Dangerous arrived last week. Aptly named ‘The Engineers’, this patch introduced a whole slew of changes that extensively revamped the core game and the overall architecture of Elite.

A lot of what was added gives more meaning to everyday actions, bringing about a more robust experience. Of major note is the improvement of non-player character artificial intelligence and the addition of powerful upgrades available to ship modules via the work of a variety of space gurus, coined Engineers. Reactions to the patch have been as varied as the fanbase, with some users expressing excitement at the new feature, and others in dismay over another potential grind.

Commanders will notice immediately that the Elite universe feels fresh with activity. Docking and undocking sequences are now voiced by some chirpy comms, with a variety of voices to make docking feel like a different experience as you travel the universe. Prior to Engineers, Elite largely suffered from what almost seemed as meaningless consequences for in-game actions, aside from some vague influence on the behind-the-scenes political sim. Now, missions clearly state what their consequences entail. Community goals are much more accessible now, and are described in greater detail concerning their objectives and outcomes. In addition, the UI has been organized to be much more easily accessible and quick to use. Mission givers now even have unique portraits for each NPC in the game with a future update slated to give characters this character creation tool to personalize their Elite avatars. You may even find yourself contacted in space by some NPCs after arriving in a new star system.

The quality-of-life fixes extend elsewhere in the game, including a revamp of the options menu.

Look at how easy it is to find where those critical control remaps are now.

The meat of this update lies within the Engineers. These wise gurus on far-off worlds (really, they can hundreds of light years apart), can grant commanders unique weapon and module upgrades. Five engineers are shown to players off the bat, although a larger list has surfaced in recent days. Engineer-made module alterations aim to make player ships more powerful. To craft unlocked upgrades, players will need to scan ships, gather materials (from planets and space sites), and in higher level recipes, deliver cargo items as reagent items for upgrades. Basically any and all in-game actions net a benefit for upgrading your gear via the Engineers.

Given the list of preliminary Engineers, I decided to go with one that was along the lines of a weapon type I truly enjoy using: cannons. Of the flak and multicannon (chaingun) variety of course. Maybe it’s my first love being the flak cannon of Unreal, but nothing speaks volumes more than slugging metal objects at another space vessel. Todd “The Blaster” Mcquinn wanted me to hand over 100,000 credits worth of bounty vouchers, so I complied by wreaking havoc in a cheaply fit Viper Mk3 and we went to business doing some minor upgrades to my flak cannon. Once the initial level is unlocked, continued use of the engineer unlocked subsequent crafting levels, much like any MMO from the mid 2000’s. 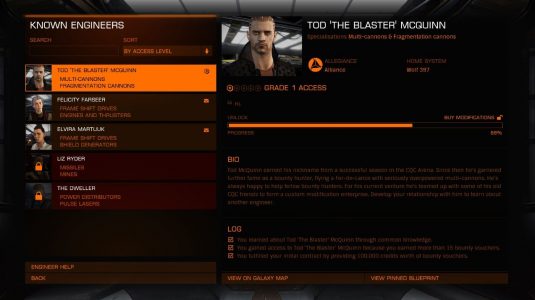 The initial list of Engineers available to all pilots, new and old.

The upgrades are worth it. They offer a chance for double shots, increased damage, rate of fire increases, weight decreases (at the cost of DPS), speed, and engine output, to name a few. Just about every important module has modifications available.

When upgrades are applied, there is also the chance for them to be better or worse than you initially planned, with even special effects that I haven’t been lucky enough to get yet. There is a lot to experiment with! 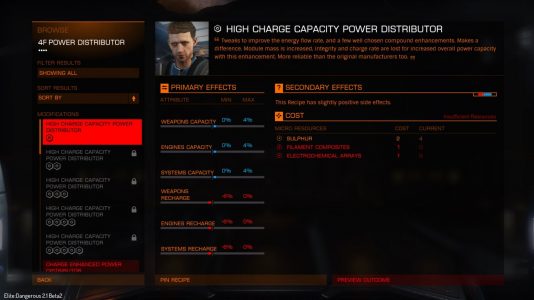 Upgrading a ship module with the help of an Engineer.

Looking to get your feet wet with engineers, but don’t know where to start? Just venture out to one of the initial engineers on the list and go at it like white on rice. You may want to make collecting materials easier, so fit a limpet controller if you are lazy and don’t like the basic looting mechanic. It will take time to unlock upgrades, seeing as you actually have to play Elite. Scan ships, collect materials, explore some signal sources, blow stuff up, and above all, have fun. To get all module upgrades, commanders will have to level up all of the engineers and unlock ones not initially handed out. Luckily a guide has surfaced, which goes over what the community has discovered so far. Some engineers for instance might require you to do some incendiary activity before unlocking them.

A word of warning, though: engineer stations are a hotbed for pirate activity in open play. Either stick to solo/group play for now or be prepared for some fights. Alternatively, go camp some Engineer stations and get your gank on.

Of special note, one engineer is available that accepts meta alloys obtained from the mysterious space barnacles. When the patch first dropped, the looted meta alloys were not available for turn in to unlock this engineer. In response, Frontier opened up the sales of those materials in the Maia system, still in the general barnacle cluster/nebula area. It’s still worth harvesting those barnacles since they are enriched with rare materials used in subsequent upgrade reactions.

Be sure to check out the engineer modification masterpost compiled by reddit user bad_r0bot.

Overall the reaction to engineers is mixed. People are really excited about the new AI updates and how combat and missions actually present a challenge now. However, unlocking subsequent module upgrades via engineers requires players to actually play the game, many see this as a new “grind.” It is commonly speculated that it may take approximately six months to unlock all engineers at the final level 5 module upgrades available. Not an easy feat, and those looking for instant gratification might be heartbroken.

If you treat the upgrades as a reward over time feature of the game, you may find them a pleasant addition to the Elite universe. If you are obsessive compulsive about min/maxing your Elite space vessel, then you may find yourself slamming your head against the metaphorical wall.

The real issue with engineers seen by many is that you cannot store certain items at the station of the Engineer, such as items from mining or by trade. So aside from materials and data that persist through death, cargo items that are required for special upgrades require you to gather them on the fly. This includes items obtained through mining, the most laborious of Elite activities. Especially since the better you get at the game, so to become the NPCs that interdict you. It is hard to fly a combat role in a hauler or mining vessel, to lug around a rare artifact or some special looted commodity. Some really find this unplayable, and have strongly voiced concern over the efficacy of the whole system. The addition of being able to actually store something in a station in Elite Dangerous would make this system a lot more forgiving. “It was needed in the initial version of the game, it was painfully absent once they added power play weapons, and now it’s getting fucking ridiculous,” said Yossarian Washburne of Merch Industrial, commenting on the lack of station inventory in Elite.

On the other hand, by not allowing players to store items at Engineers, it necessitates players circumnavigating known space to upgrade their ship to the best of its abilities. This leads to more possibilities for interdiction of player characters in open play. This is something you have to do already, since not all stations in the game have the modules that you desire.

This patch did not come without its own hilarious hiccups. Players flying expensive ships or hauling expensive cargo found themselves interdicted at every step right after the patch dropped. To top things off, they were quickly instagibbed (basically being headshot in Elite terms) by broken use of engineer upgrades by NPC ships along with a broken rapid fire mechanic. Frontier has been quick to address these problems. NPCs now only have non-weapon Engineer upgrades, and the risk of instant destruction has subsided, unless you decide to pick off more than you can chew. NPCs will regain Engineer weapon upgrades in the future.

Elite is shaping up to be a more immersive experience, and to be honest, when I play it now I am having more fun, specifically with friends. I do understand the frustration with Engineers – what we have is definitely a “Work In Progress”. There is beauty in the Engineers, be it their stations or their upgrades. Hopefully some sort of non-trade compatible item vault opens up in the near future.

For me, Elite is an extra game in my gaming repertoire, where I can get lost in space and blow up things. There aren’t many games that you need to manage six-degrees-of-freedom with multiple options of weapon customization. The extra immersion features such as NPC voices and pictures is helping to shape the universe more. Knowledge of the direct effects of your actions helps to direct your in-game play time, and blowing spaceships up with friends never gets old.

In the coming months, the Horizons season will feature additional updates, including the ability to have more than one person command a ship, customize your avatar, and the unlocking of additional planet-types. By the way, Elite Dangerous Horizons is out on Xbox One as of a few days ago.

Stay tuned as we continue to provide coverage on Elite Dangerous.

Special thanks to Daedalus ONeill for his contributions to this article.