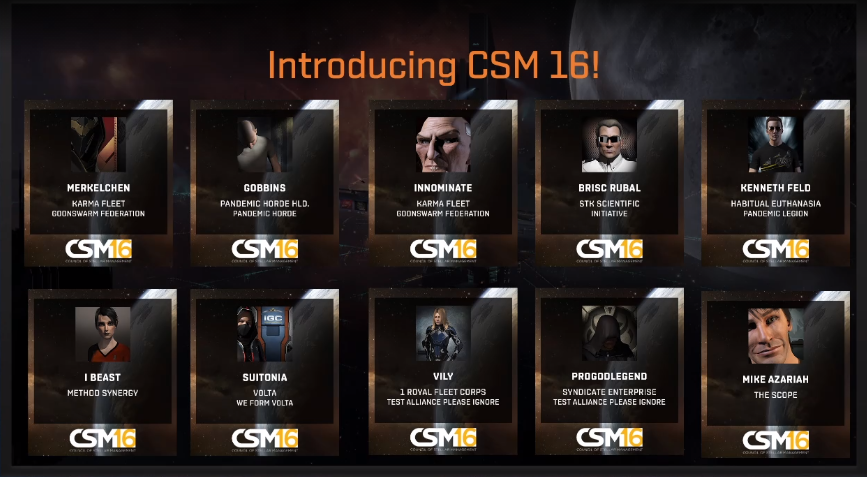 CSM16 election results have been announced! Players cast 38,806 votes in this year’s election, up from last years total of more than 36,000.

Almost all of these individuals have served on the CSM before, and some of them—like Merkelchen and Innominate—are long-standing CSM members. However, there is one newcomer this year. i Beast (the main of the popular Russian streamer Lucy Lou) will be serving his first term on the CSM.

Most of the winning candidates are representative of major nullsec blocs, with Merkelchen, Innominate, Brisc Rubal, Gobbins, Kenneth Feld, Vily, and PGL all being part of either PAPI or the Imperium. Neither Maldavius, the leading Triglavian candidate, nor any of the leading worm hole candidates won a spot.

A few of the winners expressed their satisfaction and gratitude at being elected:

Brisc Rubal:
“I’m pleased that the players have chosen to re-elect me to CSM 16. I intend to continue doing on CSM 16 what I’ve done in my previous two terms – work hard, every day, for the betterment of the game, and promote as much transparency and communication between the CSM and the players and CCP and the players as possible.”

Progodlegend:
“I appreciate the support of the voters, and I’m happy to have a chance to help shape this next era of EVE online.”

A few of the candidates who were not successful also shared their reaction with INN:

Maldavius:
“To be honest, I have no delusions of grandeur here. I am a niche candidate, a first time runner, and a Triglavian. I feel that many of my supporters voices were heard during the debates. With that in mind I’ve already won regardless of [this] outcome.”

Baculus Orden (of Delta Sqad):
“I would direct all requests for comment to my space attorney, Furnok Dorn. There is absolutely no question in our minds that this election was stolen—that ballot orders were obviously tampered with, and that all EVE players are being done a terrible disservice today. We will pursue every possible legal recourse to see that justice be done, and the will of the people is served. Glory to Delta Sqad!”

Furnok Dorn (Baculus Orden’s space attorney):
“So, I’m here on behalf of the Baculus Campaign, as an attorney for the candidate, to describe to you the first part of a situation that is extremely troubling, and these lawsuits will be brought starting on Wednesday. As you know from the very beginning, the online ballots were a source of some degree of skepticism, if not a lot of skepticism, as being innately prone to fraud. Talking in Stations had written that 10 years ago under other circumstances, but of course changed their mind once it was a situation involving CSM Candidate Baculus Orden. With all that, you would have expected there’d be a high degree of security and a high degree of inspection that would be provided for online ballots. Instead, there was no inspection of a single online ballot. Those online ballots could have been from anybody. Those online ballots could have been for anybody they wrote in.”

Four of the winners will be serving their third consecutive term since the CSM rules changes and will not be eligible to stand for reelection next year. Those four are: Gobbins, Innominate, Brisc Rubal, and Vily.