Circle-of-Two announced on reddit today that they are reseting standings with Goonswarm Federation and the rest of the Imperium. The announcement came at the end of a five hour engagement in which the combined Imperium forces lost over 240 billion while defending a CO2 IHUB. Circle-of-Two suffered 40b of the losses, as well as the destruction of the IHUB, while the rest of the Imperium took the other 200b+, including the loss of most of two Machariel fleets a Proteus fleet, at least one combined FCON/RZR Sleipnir fleet.

The fight began in M-OEEB on the lowsec regional gate into Taisy. The Imperium fielded two Machariel fleets, a Proteus fleet, and DBRB’s Bomberwaffe wing out of Saranen, while FCON and Razor fielded a Sleipnir fleet. CO2 fielded a Proteus fleet of their own. On the attacking side, TEST fielded two fleets, one a classic Maelstrom alphafleet, and the other a large contingent of stealth bombers. NCdot was on-field in armor T3s of their own, while Darkness and their coalition members brought a Cerberus fleet, and Pandemic Legion came in Rattlesnakes. Both ISDIC and CCP proper (in the form of CCP Karkur) turned up to observe the battle, which was almost certainly on a reinforced node. 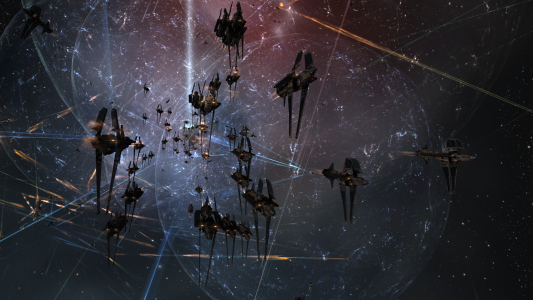 After initial skirmishing, the action began to move into J-GAMP. It was at this point that the FCON/RZR fleet fell prey to a highly successful bombing run. Inflicting heavy losses, the stealth bombers effectively removed the Sleipnirs from the brawl that was about to begin. J-GAMP, however, appears to have not been a reinforced node, and the entire battle quickly spiraled down beyond the 10% Time Dilation limit. As the lag worsened, modules failed to activate, fleet warps became impossible, and old hands in a number of fleets began to feel a familiar sensation. Doubtlessly many thought ‘I’d better order pizza, I’m gonna be here a while.’

Right from the start, the battle was heavily skewed toward the attackers. Fielding over 2100 pilots to the Imperium’s 1200 (300 of which were in CO2), the attacking Moneybadgers began powering through Imperium FC ships, quickly removing Machariel FC Jay Amazingness from the field, as well as Asher Elias in the Proteus Fleet. This may have been a retaliatory strike after the Imperium Machfleet shattered TEST FC Progodlegend’s Maelstrom. It might also have simply been a quick and easy means of sowing confusion and breaking down fleet discipline. Regardless of ‘why’, it was certainly effective.

At the same time, capital powerhouses NCdot and Pandemic Legion began lighting cynos throughout the constellation, dropping triage carriers onto command nodes in order to secure them. The use of capitals in Aegis Sov warfare is something CCP has expressly attempted to disincentivize, adding a 5x multiplier to the cycle time of an entosis link on any capital. As a result, even the ‘faster’ T2 Entosis link takes a full 10 minutes to cycle – at normal speed. This means that any carrier using an entosis link is stuck in place, unable to receive remote assistance, for at least twenty minutes, as the module has no effect on the node until completing its first cycle, and cannot deactivate in the middle of its second.

Normally, use of capitals in this manner is an open invitation for dread-bombs to be dropped and destroy them. However, with the Imperium fleets trapped in heavy TiDi, the carriers in lighter TiDi were more able to engage in entosis warfare than normal. As well, with M-OEEB reinforced, the system experienced absolutely no Time Dilation for a large section of the fight. These hackers were also supported by subcapital hackers, such as Grath Telkin, who was flying a Vagabond.

Extracting from the direct engagement, Imperium forces attempted to deal with the triage carriers. The heavy losses they sustained in the fighting, however, made it impossible for most of the remaining fleets to successfully overpower the local reps of the triage carriers before reinforcements could warp in to the rescue. Though the Imperium forces spent several hours attempting to contest the IHUB, with assurances that CO2 hackers were working hard to regain momentum, a swing of 40% – from 70% saved down to 30% – in under ten minutes certainly appears suspicious in hindsight.

Ultimately, the IHUB was lost, and as Imperium forces attempted to regroup, the post on /r/EVE announcing the reset brought the engagement to a rapid end. When questioned on whether the announcement was true, Sebastien Saintfrusquin could offer only, “I am sorry, my friends, it is. Goodbye.”

The decision to reset the Imperium was made, according to senior CO2 FC Sebastien Saintfrusquin, during an EU-morning meeting of senior CO2 leadership before the fight. This decision may have been a pivotal factor in the battle, as no cynojammers were online in any of the systems in the target constellation. Taking advantage of this, PL and NCdot used triage carriers to win IHUB command nodes while the Imperium fleets were pinned down in the combination of Time Dilation and interdictor bubbles. This also explains the sudden disappearance of the jump bridges in the constellation. As PL and NCdot have been pushing for a major supercapital engagement, it seems clear at this time that had the Imperium committed supercapitals to the fight, Circle-of-Two’s supers would have come into the battle as a fifth column, and engaged the Imperium from behind.

In CO2’s announcement, it was stated that:

We continued to do what good allies are supposed to do; help where assistance was needed. At the same time we did what we think an alliance should do; take care of our members, try to grow and better ourselves.

We had, separate from Goons, made plans to defend Tribute and Vale together with The Bastion and Get Off My Lawn. All it took was a candlelit dinner with Mittens for The Bastion and Lawn to completely abandon Vale and leave CO2 alone to defend Tribute. The whole time other Imperium alliances were called to Saranen, while we were not even informed of such movements or how they would relate in regards to the defense of Tribute.

However, Bastion and Lawn did keep CO2 in the loop regarding the change of plans, and CO2 was involved in the planning for the LAWN/Bastion supercapital move that took place over the last forty-eight hours. The plans were detailed enough that Sebastien Saintfrusquin insisted only hours before that the Lawn/Bastion supercapitals would have to cyno through MJI3-8 – a system in the constellation being actively contested.

In fact, only hours before the planned move, scouts moving into position to oversee the supercapital move found a large number of CO2 Interdictors setting up perches near the towers – towers CO2 themselves had insisted upon using. While curious, no alarms were raised at the time, and only a lucky decision by Imperium capital FC Kcolor to take an alternate route in order to avoid any potential pitfalls involving forces surrounding the IHUB defense averted complete disaster.

In light of these new developments, the implication is clear: despite Sebastien’s statement, the decision to set a trap for the Imperium supercapital fleet was likely set up at least week in advance. The planning for CO2’s ‘defense’ of Tribute originally included moving the Lawn and Bastion supercapital fleets to TVN-FM, within striking range of M-OEEB. Had there been a trap sprung, the Imperium’s supercapital fleet would have rushed to the defense of the allied supercapitals. This would then have given the attacking forces the decisive supercapital brawl they have admitted to seeking.

Sebastien Saintfrusquin, when asked, confirmed that CO2 was, in fact, paid in advance for this reversal, though he declined to reveal an amount. He insisted he had no idea how large the payment had been, because, “frankly, that doesn’t really interest [him].”

The effects of this development have already been felt on both sides of the conflict. Posters on  /r/EVE have been openly gloating in the thread, while Imperium members who fought for hours, only to be betrayed, appear to have only hardened in their resolve. Upon receiving word of the announcement, The Mittani, leader of Goonswarm, sent the following statements out on the Coalition’s jabber system:

“It appears that after spending the entire day with us fighting on their behalf to defend their home, C02 has chosen to reset the entire coalition in approximately the next 30 minutes. That’s a pretty impressive backstab, and it’s apparently all our fault. This is a shame, but there’s no question of right or wrong on this one: we’ve expended a tremendous amount of blood and treasure defending C02 assets in Hakonen and Tribute over the past two months, and this is the spit in our eye after an all-day defense of their homeland.

“Apparently C02’s senior leadership met this morning and decided to play this card regardless of how this M-O fight went down. That explains why we discovered this morning to our shock that there were no cynojammers in the target constellation, and that they knew they would flip on all of us even as we were doing our best to be loyal defenders of their territory. It also explains why the hostiles had their capfleets ready and waiting; they hoped for us to risk our supers, in hopes of C02 turning on us. The easter holiday off, the invitation of every random Eve 3rd party to join an otherwise irrelevant ihub timer: all becomes clear. This was a planned trap, one which we thankfully were not dumb enough to stick our super fleet into. This is why it is all the more crucial that we evacuated the LAWN/Bastion superfleet from Vale~

TMC will continue to cover developments, as the war between the Imperium and the Moneybadgers continues to heat up.