On August 24, the Imperium began its assault on the Providence bloc with the intent of destroying their Activity Defence Multipliers (ADM) by popping all their iHubs in the name of the true emperor, Maximilian Singularity VI. What initially began as a purely Imperium operation blossomed into a massive brawl. Pandemic Legion and the Geminate Coalition have made appearances with Brave Collective, who have temporarily deployed from Placid to get ‘Goon killmails.’

Many doctrines and many fleets have been seen, with the Geminate Coalition bringing an Ishtar fleet, while Stainwagon Coalition and Pandemic Legion along with some Imperium elements have fielded Cerberus fleets. The Imperium also brought Drakes, Tengus, Cynabals, Caracals, Harpies, and masses of trollceptors. Providence has been defending with their trademarked Naga/Tornado Attack Battlecruiser fleets along with Cerebus fleets of their own and Ruptures/Caracals. Last night totaled 52 billion ISK in damages among all participants with 14.06b lost by the Imperium, 17.36b by the Geminate Coalition, 1.47b lost by Pandemic Legion, 2.33b lost by Stainwagon Coalition, and finally 12.15b lost by Providence themselves. 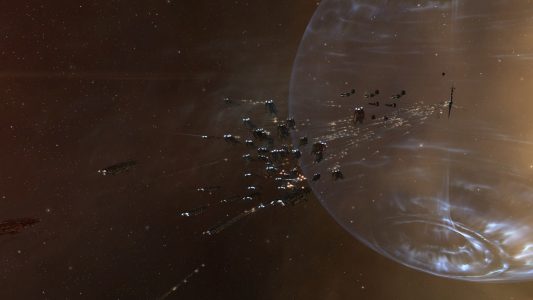 Today has been no different. At least 14 billion ISK has been destroyed as shown in this BR where Provi bravely dropped capitals in the face of many huge Imperium fleets. Fleets from diverse groups continue to roam, fighting with or against Providence, or simply shooting whatever shows up.

Many noted FCs have been commanding in the chaos, such as Asher Elias of Goonswarm Federation, Killah Bee of Pandemic Legion, and Tetractys and corebloodbrothers of Providence. These skilled commanders make the fighting interesting and fun for those involved.

Tomorrow at 17:00 EVE, The Mittani has called for the assembly of all Imperial forces to begin the torching of Providence iHubs, though one has already fallen. Day 3 of the Providence invasion is shaping up to be one hell of a fight.