After blasting past its first set of funding goals within the first 24 hours of its launch near the end of September, the BattleTech kickstarter has come to a thoroughly successful close. The crowdfunding campaign took in over two-point-eight million dollars over a thirty six day period, blasting past all the stretch goals, and securing the future of what looks like one of 2017’s most anticipated games.

Developer Harebrained Schemes, known for the Shadowrun Returns series (also successfully crowdfunded), put up the money for a basic skirmish game. Without any extra funding, they would have produced a simple skirmish game that pits a lance of BattleMechs (typically four giant robots in varying weight classes) against a similar opposing force.

With the amount of money raised from the crowdfunding campaign, it’s now set to be so much more. In addition to instant action combat, BattleTech will ship with a fully-fledged single-player campaign that puts players in charge of a mercenary outfit. Players will also get the option to take procedurally-generated contracts in addition to the main storyline.

On top of that, a multiplayer mode was funded in the last 48 hours of the campaign, and will pitch players against each other on a world dedicated to gladiatorial mech combat.

The game will not use the original ruleset exactly, but instead will go for something in the “spirit of the original tabletop rules.” While there are no details exactly on what that entails, the creator of BattleTech and MechWarrior is on board with the project, and Shadowrun Returns has been well-received. 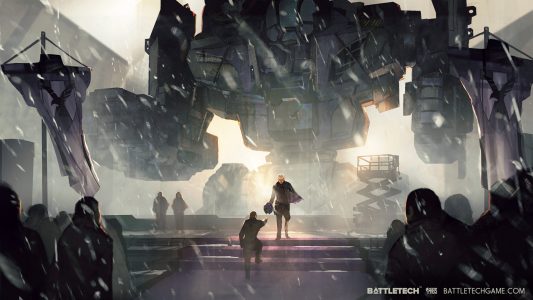 So why are people so excited for this game?

In the thirty years that it has been around, the BattleTech franchise has spawned, in addition to the original game, mountains of fiction, a tactical miniatures game, and around a dozen video game spinoffs. Said spinoffs even included actual arcades dedicated to mech combat. Even the franchise’s lesser offerings (raise your hands in the comments if the words “MY HOME PLANET”, or “Kaetetôã” ring a bell) have their place in the hearts of fans, if at a distance.

Above all that, nearly everyone who has gotten involved with the franchise has a story to tell where they’ve come up against tough odds and come out on top in a nail-biting victory, whether in the tabletop version or a PC adaptation. While none of it is shared across a persistent universe, like with EVE Online (if you haven’t checked out The Fountain War kickstarter, you should), there’s a sense of camaraderie and shared experience that goes along with every great player tale.

Given the fate of the last turn-based BattleTech game (MechWarrior Tactics never got off the ground), and an amount of general uncertainty regarding games on kickstarter, this game was up against tough odds from the start. But, with the success of the crowdfunding campaign and the talent behind it, fans of the franchise now have something to be optimistic about.

BattleTech is aiming for a release in May 2017. It will be available as a DRM-free game, and on Steam.

This article originally appeared on TheMittani.com, written by Ryan Vincent.