In the system of Vlillirier, in the heart of the region of Placid, today saw the loss of a Gold Magnate, valued at a staggering 500 Billion ISK. The Gold Magnate was reintroduced to the game with the completion of the Amarr Championship in 2016. Four Gold Magnates were awarded to the winning Tash-Murkon team, captained by Eve University’s very own Kelon Darklight. This kill represents the first loss of a Gold Magnate since the ship’s reintroduction. Prior to the Amarr Succession Trials last year, there had only been one Gold Magnate put into the game, which was piloted by Tyrrax Thorrk and destroyed in combat by pilots from m0o. With over 13 years between the first and second kills, and only three more of these ships remaining in the game, the Gold Magnate remains one of the rarest killmails in New Eden.

Although the death mail belongs to a character named IQUIT FLYSAFEo7, the Gold Magnate actually belongs to Maxine Antilles, a former pilot with Exodus. and Escalating Entropy. It appears that the kill/lossmail is Maxine Antilles’ final action in game. 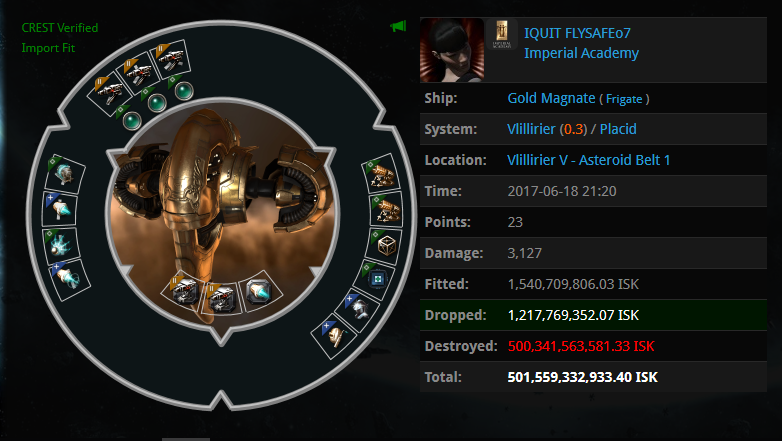 Most of his corpmates were not aware of his intention to quit the game in such fashion, and Antilles himself is unavailable to comment. However, his close friends within the game, and pilots he flew often with, left comments on his final action.

Wasa Qc explained:
“With stagnant low sec, activity dropping around, he started to find the game boring, and wanted to win the game with a big explosion”

Meanwhile, Lucian IV, a pilot in Habitual Euthanasia, also added:
“I can sell mine for more now, though I’m sort of sad he didn’t let 3 gold magnates kill his”

UPDATE: The original text of this article indicated this loss was the first Gold Magnate destroyed in EVE, not the first one destroyed since the ship was re-introduced with the Amarr Trials. This has been corrected.

h/t Silvester Anbergen for remembering the death of the original Gold Magnate.