A Month With Theta Squad

Hello, dear capsuleers. I am once again bringing you an article about life inside the Imperium. During the war against NCdot, I covered the Scouts and Recon SIGs in an interview with Moomin Amatin. For this review, I spent a whole month logging in every day to fly with Theta Squad, and these are the stories from that time.

Who are Theta Squad?

If you are in the Imperium and you don’t know who Theta Squad are, then you are doing something wrong. For the non-Imperium players among you, Theta are the group that helps at-risk capsuleers under the Imperium’s 1DQ1-A supercapital umbrella. Regardless of whether you are flying a capital or subcapital ship, Theta’s standing fleet will help you if you call on them in a timely and efficient manner. However, if you read on, you will discover that Theta Squad is more than just a reaction force.

The Origins of Theta Squad

It was hard to get to the roots of Theta’s name. In European TZ, players told me that “Theta” means boobs in Serbian. In Australian TZ, I couldn’t find the right time to ask that question, because comms are always busy discussing something; I advise grabbing a beer and popcorn, it really is worth it. Then, during American TZs… Let’s just say they had more fun shouting “HonHon” on mumble when they discovered I am French.

But here are the origins of Theta Squad. At the start of Goonswarm, way back in 2006, there were no social groups, no squads, and no SIGs in the way they exist today. It was just one big corporation with thousands of pilots. Back then, when you joined Goonswarm, new capsuleers would join one of five squads (Epsilon, Theta, Sigma, Rho, and Pi), each oriented toward an aspect of the game. Theta was the place where Goonswarm pilots interested in making ISK would go.

This is what it meant to be a member of Goonswarm way back when. At around this time, Goonswarm took Delve from Band of Brothers, then consequently lost Delve and moved to Deklein. At this point, some particular interest groups started to develop, and Theta started to become the social group we know nowadays. Theta became especially effective during the Deklein era, and when the Imperium moved back into Delve in 2016, the consolidated response fleet known as “the Delve umbrella” was spearheaded by Theta Squad. This defence fleet provided opportunities for Imperium capsuleers to rat and mine (‘krabbing’) with the ability to call for help if roaming enemies tackled them.

Theta Squad went further and maintains a 24h7 days active fleet named “JU- standing”. JU- standing refers to the JU-OWQ solar system in Deklein, wherein the time that Goonswarm staged its standing fleet there. In recent years, they have staged in 1DQ1-A in Delve (the capital system of the Imperium), and Theta Squad has become so effective in helping capsuleers in need that most standard ratting and mining ships in Delve include a cynosural module for calling in defensive forces. 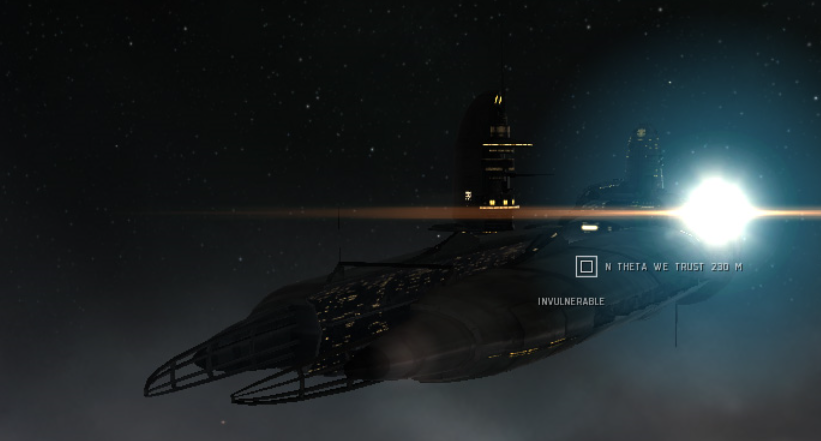 How Theta Saved Me

This is not just empty praise – Theta squad saved my Rorqual once. An Interdictor bubbled my Rorqual, and then in just a few seconds, around 10 Kikimoras with other support started aggressing me. Adrenaline kicked in, and I knew I needed to call on Theta squad for help. After giving the necessary intel on comms, I heard the “open cyno” command, before five supercarriers and a fax jumped in. They engaged the attacking fleet and killed some of them. The supers then stayed on grid until my cyno beacon cycled down and I was absolutely safe. This helped me to understand that following Theta’s various recommendations (fitting and procedures) can save my shiny ship 99% in any time zone. Furthermore, any hostile capitals jumping to targets in Delve will typically end up in a station clone bay. Sorry, but we like to salvage capital ships in Delve…

All of these experiences contribute to the fact that Theta Squad responds faster to players in trouble, and more that, Theta saves more ships from destruction, than CONCORD does in the so-called “High Security” empire space”.

My experience also made me want to join the global defensive efforts of Theta Squad. Every member of the Imperium can join Theta, but if you want to help out, there are some basic needs. Firstly, be in an active PVP ship, logged in 1DQ and in the JU- standing fleet. Next, it is a must to be on comms and active – Theta’s resoinse only works of you are available. Thirdly, Theta’s fleet has enough super capitals. What it always lacks are tackle ships (especially hero dictors) and Force Auxiliaries; one regular Theta pilot told me that “we never have enough of those”. This is exactly why I have dedicated a Force Auxiliary to the defense. Lastly, don’t be like the guy who was ratting with 3 supercarriers and called for help without having his own Fax! Why should we put an account on standby to help you if you can’t put in the effort to at least try to help yourself? Be a team player, every ship counts.

The conversations I had made me a bit more curious about Theta Squad’s activity levels. On one hand, It is impossible to know how many ships Theta save regularly, because there is no official count. On the other hand, we can identify how many ships the Imperium lost under the umbrella. I ran kill by kill in delve for July and found that the Imperium lost 52 capitals (15 rorquals, 22 carriers, 2 dreads, 7 super carriers, and 6 force aux.) while they killed 98 capitals (15 carriers, 79 dreads, 2 super carriers, 2 force aux.). I did not subtract kills made by Drifters, because Theta squad was actively helping capsuleers in danger. Considering that the Imperium has more than 38,000 pilots, those losses are ridiculously low.

Additionally, in all time zones, when I asked who are the people that give the most to Theta, everyone said Macdermott. Rest assured, if he is on comms you will notice him, and you should know you are safe.

If you don’t want John Hartley (one of Theta’s regular response FCs) to facepalm because of you, you need to read the MOTD of the “JU- standing fleet” and live by it. What makes the regular Theta response pilots angry are those players who are not on comms and just ask for help in the JU fleet without trying to communicate properly. Also make sure that you have a decent fit that matches with the coalition standards (actually have some tank!) and be sure to open your cyno in the JU- fleet.

What I have discovered after a month with Theta Squad is that Theta is more than a mutual defense force. Theta pilots lives under a common way of life; “I will help you today so you can help me tomorrow”. It is full of proactive capsuleers that develop more than just EVE Online content. It develops friendships with other members of the Imperium, and I learned a lot from playing with these people. Additionally, the conversations in comms are not just about EVE – they can be about social topics, the news, and just day to day information. But once you hear “I need help” or “check check” everyone shuts up and it becomes battlecomms standards.

For me, Theta is more than just a standing fleet. It is a place where an Imperium member can create social bonds. It is a place where the community rallies, and I think it is one of the biggest bonuses of the Imperium coalition. So, I hope to see you in Theta’s Mumble channel soon, with a force auxiliary or tackler ready for action.

Finally, let’s just take a moment to thank all these hero pilots that don’t get a pap to save us when we are krabbing!

Just a few hours ago, CCP released the patch notes for...