On October 14 at 2215, a Fortizar came into hull vulnerability in Lannigisi in Metropolis.  This is not so unusual; citadels explode in New Eden at regular intervals these days.

The interesting thing about this citadel is the way it brought together the shifting dynamic in highsec, along with some unusual use of mechanics, and the involvement of nullsec entities in areas they have usually ignored.

Back in May, we covered a story in which we mentioned that all the main HS mercenaries were blue to each other, and therefore would not attack citadels if another merc alliance had a defense contract with them.

This highsec version of the blue donut held for a while, with two prominent mercenary alliances, Vendetta Mercenary Group, and Archetype reaching broad agreements on different trade hub regions.  VMG primarily operated out of The Forge, while Archetype were over in Sinq Laison.

Fast forward a bit, and the mercenary alliances had each begun to slowly take control of citadels in their respective regions.  Then a Fortizar was placed in Agrallier, in Sinq Laison. This was in the region where Archetype had been mostly working on taking down citadels.

Archetype contacted the owner, and offered them the options of paying them, move, or fight them.  The owner initially offered to pay, and leave their citadel up, but the next day contacted Archetype to say that a deal had been made with VMG to defend their citadel. This went against the agreement that Archetype thought they had with VMG, to not take contracts on citadels that the other group had an opposing contract for.  Archetype at the time were undergoing some internal problems, so were not in a position to fight for the citadel, dropped the attacks.

Vendetta for their part, saw it from the opposite perspective, they had a contract with the owner for defense, and then Archetype issued a wardec, so it was Archetype breaking the agreement.

A few weeks later, Archetype had restructured, and had got back into the business of citadel bashing.  They wardecced a citadel in Ashab (in Domain), and again contacted the owner. Again the owner offered to pay up, and then the next day contacted them to say that VMG had a defense contract.  This led to both Archetype and VMG moving all over highsec, taking sides in wardecs and moving against each others citadel contracts.

This culminated in the events of 14 October, at the citadel in Lannigsi.  A newcomer on the highsec citadel bashing scene, Wrecking Machine, had wardecced a citadel belonging to Di-Tron Heavy Industries, an ex-TEST corp. They are not mercenaries, so were neutral to all the highsec mercs, and had first run into the fights between VMG and Archetype in Agrallier when VMG asked them to join in any required citadel defense.

Wrecking Machine had noticed the Fortizar in Lannigsi, and had seen the corporation information and activity of Di-Tron Heavy Industries, so thought that they had the ability to defend, and would ensure some fights, rather than a structure shoot. Archetype had been contacted by Di-Tron to defend the citadel, but had been unable to attend for the shield timer. VMG also joined the war, in response to Archetype being hired by Di-Tron.

At this point, the story diverges from a citadel fight, and moves into a story about wardec mechanics.

The armor timer came, and the fleets formed up.  TEST had joined the defense, but, having an already active wardec with VMG, they did not join the war against Wrecking Machine as allies.

The fight began, with Archetype and Complaints Department were on the defense side, and VMG and Wrecking Machine the main protagonists on the attacking side.  TEST turned up late to the party, but with numbers that overwhelmed the attacking fleets.  With maelstroms filling the grid, the attackers retreated to a station to repair and regroup. 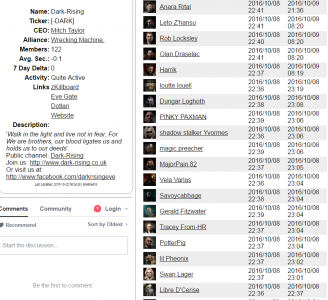 As you can see, quite a few did.  They then undocked and headed back to the fight, leaving TEST unable to engage them, and them free to take the citadel into final reinforcement timer.

This mechanic is well-known and used throughout highsec wars, there are variations on it, one of which we will see shortly, but, to most people who have done anything in highsec wars, this is not new. It is used for corp hopping to avoid decs as well, so it is a tactic that has benefits to both aggressors and defenders.

The hull timer is where things become interesting. Some things to bear in mind here:

After the armor timer, everyone involved expected a large fight for the hull timer, and, Imperium News was informed that there was likely to be a large fight in Lanngisi, with several hundred people on each side, and a citadel explosion.

Preparations were underway for both sides, with a sudden outbreak of 1-man corporations joining the war immediately after creation.  Unlike anchoring a structure, which has a 7d delay after corporation creation, you can issue a wardec immediately, so, the image below shows the view of the wars on the night of the timer. It is clear that a large number of corporations joined 24h before the timer, and many of these were created minutes before the wardec was made. 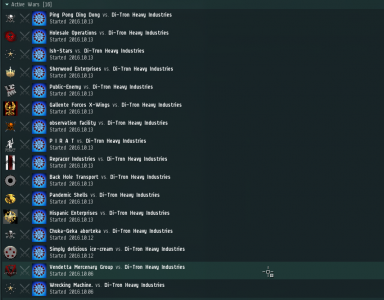 These were created in such numbers because, the idea is, that anyone who joins as allies has to join all the wars, so if you create as many wars as possible, your opponent might miss one when they join as allies, then there is an option for people to switch corp mid fight.

Back at the beginning of the article, we mentioned the involvement of nullsec entities, and TEST were involved for the armor timer as we saw, and they had a war with VMG which ended on the 14th.

This is relevant because, there is an oddity of highsec wardec mechanics which has only become of any importance with the introduction of timers to highsec via citadels.

One of the rules of highsec war is that you cannot have 2 active wars against the same entity. There is also a 24-hour timer between when war is declared and when the war goes active.

These two things can be combined to give a corporation effective immunity during citadel vulnerability timer.  This is how it works:

VMG had an active war against TEST on the 7th October, meaning it timed out on 14th October, unless the bill was paid.  The bill was not paid, so, the war ended.

Immediately after the war ended, a new war was declared, initiating the 24h timer.  During this 24h timer, the alliances or corporations are considered to be at war, even though they cannot shoot each other. This prevents them from joining any wars as allies involving the other party in the war.

Before citadels, this would not matter, as a war is a war, and you can just shoot them later. With citadel timers, this mechanic allows you to lock someone out from participating in a citadel timer.

What you do is, if you hear that a corporation is likely to join a war as allies, you dec them less than 24h before the timer.  This means that they do not have time to join the timer fight. They can join the other wars as allies, but they cannot join any war involving your corp.

What this meant is, due to TEST being unable to attend, there was a lack of defense force for the final timer, with under 6 hours to go to find an ally and get them to join the war. Pandemic Legion were hired, and assembled a fleet to defend.

In the event, the fight was underwhelming, the Pandemic Legion fleet of Tornados with logistics support ensured the citadel repaired without a shot being fired at it.  Pandemic Legion spending the 15 minutes practicing fleet warping around the system and everyone else sitting outside the citadel waiting for the timer to finish.

The mechanic which locked TEST out of the final timer however, has now been noticed by other parties involved in citadel attack and defense, and whilst everyone I have spoken to agrees that it does not seem to be working as intended, there are not any easy suggestions as to how to fix it.  Vendetta Mercenary Group are far from the only group using this 24-hour immunity to their advantage, but, this has been the most marked example of it coming into play.

Wardecs in highsec tread a delicate line, and any changes have to stick to the principle of anyone being able to wardec anyone, anytime, for any reason they want.  There could, perhaps, be a change so that if you have a pending wardec, you can join wars as ally, but when your pending dec goes active, your ally status drops.

The problem of creating corps just to wardec someone to provide alt corps to hop into can be changed by giving newly created corps a cooldown on wardecs, similar to that for anchoring.

Wardecs in general are badly in need of an overhaul of their mechanics, but, the fear from both attackers and defenders is that any changes made will swing the balance too far in any one direction, and this is perhaps why any changes to the mechanics are few and far between.