Wargaming’s Naval Academy series on Youtube has taken a turn onto the specific ships within the game instead of their previous “how to play” tutorials. This week’s theme is the American Cruiser line up. In the video, a brief overview and history of the ships are given with some basic advantages and disadvantages stated. However, this barely scratches the surface of how to really use these cruisers. In the style of some of the other guides we have posted recently, here is what we have found to be the best way to use the American Cruisers.

The United States Navy [USN] features a complete line of ten cruisers in the standard tiers along with two premium cruisers available for purchase. For the most part, American cruisers have better AA than their Imperial Japanese Navy [IJN] counterparts, but lack the extra punch from Japanese torpedoes. As a result, the American cruisers find themselves in more of a wolf-pack or escort style of play rather than trying to hunt the enemy down solo. Further supporting this role is the tendency for American cruisers to have very light armor and shorter ranges, necessitating the cover of other ships to close the distance and grab the enemies’ attention.

American cruiser speeds range from 20 knots in the early tiers to 35 knots in the mid-tiers. This speed, combined with respectable maneuverability, turret traverse speed, and rapid rates of fire mean that these cruisers are superb at taking out enemy destroyers and cruisers, and can even put some hurt on the big battleships when in groups. Ammo choice is very important given the range of calibers that the American cruisers equip, so be sure to give our guide on choosing the right ammo a gander. Now let’s get into the specifics of each hull. 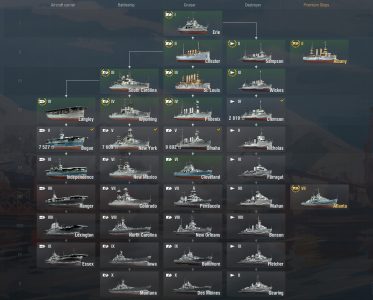 Players looking to expand their American tech tree are going to start with these two ships. Slow, poorly armored, and only moderately armed, the saving grace is that you will not be facing too many other ships that are better. Do not spend any extra credits on the upgrades as your goal in these ships is to get out of them quickly. The Erie does not have a range advantage, so make use of cover when possible. With a higher speed and better maneuverability compared to the Katori, closing the gap and staying mobile is important.

When you upgrade to the Chester, you’ll benefit from much stouter armor, a secondary armament, boost in speed and maneuverability. Sadly, your gun range maxed out at a paltry 9.3 kilometers. The IJN cruisers still out range you, so closing the distance is key. You are a little more likely to encounter destroyers, so keep your eye out for torpedoes. Your rate of fire and speed will provide plenty of damage for your tier. Avoid one on one situations against the St. Louis.

The St. Louis is the most fun I have had in World of Warships. When upgraded to the 1924 hull, you are a rolling gun platform spitting out more shells than anything on the battlefield. Blessed with 14 six-inch cannons as a primary battery and 18 secondary guns, the St. Louis can put down some serious hurt to anyone silly enough to get close enough.

Your range of 10.4km when upgraded is good for a US cruiser, but still much smaller than the Japanese cruisers and battleships you will be up against. As a result, using cover is imperative. When you can get in range, load HE and burn everything to the ground. You are also very vulnerable to aircraft, so don’t ignore those indicators. The most vulnerable location on the St Louis is the front when only one of your guns can fire, so make sure to always approach your targets at an angle. Enjoy this ship.

The Phoenix and the Omaha class cruisers have a significant amount in common and benefit from a similar play style. Both ships come equipped with six-inch cannons, Mk 11 Torpedoes, no secondary armament, and a similar top speed of 33 knots. The Phoenix benefits from slightly faster turret speed, and the Omaha benefits from slightly better armor and good AA after being upgraded.

When in these ships, your torpedoes can be the most powerful asset. Hold onto them until the enemy is too close to dodge for best result. Their 5km range doesn’t lend itself to sniping, nor do only 3 torpedoes make enough of a spread to clog a lane. Avoid attention if at all possible, using packs if possible; poor armor make these ships rather fragile.

The Cleveland and Pensacola are some of the most beloved ships in the USN arsenal and for good reason. These cruisers are everything you want: quick, nimble, hard hitting, and can stand up to a fair amount more abuse than their predecessors. That being said, mobility and range will be your key to surviving. Given the amount of time you’ll be in these ships, purchasing the upgrades is highly recommended.  Depending on your play style, you may find different upgrades more valuable, however if you cannot decide here’s our recommendation: Main Battery Modification 1 to give your guns a bit more sustainability, Gun Fire Control System to give your guns that extra bit of precision, Damage Control System for better fire resistance, and Steering Gears for dodging incoming fire. Upgrading your AA is also a viable option, giving you the ability to chew through enemy planes at a rate that will make you the bane of any aircraft carrier that dare oppose you.

The Cleveland has quick firing five-inch guns that pack a wallop and when combined with their best-in-class anti-aircraft guns, can cripple enemy carriers. Well trained commanders are essential for these two powerhouses; the Defensive Fire skill is particularly effective with the dual purpose cannons found on the Cleveland. The Pensacola has eight-inch guns capable of doing strong damage to all ships but with a significant hit to reloading speed. Out of the box, you have four double barreled turrets supported by eight secondary five-inch cannons giving you some defense against getting swarmed by multiple enemies. Your best defense, however, is staying with the pack and focusing fire. Even the 20% health increase with the 1944 hull isn’t enough to save this ship from being primary.

The eighth tier New Orleans stacks up favorably against its Japanese counterpart. It trades volume of fire and two knots for superior eight-inch guns out of the gate and an extra kilometer of range. The hit point disparity of four to five thousand is certainly felt, but not as pronounced as some of the earlier tiers. Combine that with up to five-inch armor, and you have the first real stout American cruiser. Compared to the Pensacola, you have a larger silhouette, so enemy rounds are more likely to impact you. You have significantly better concealment, however, because that makes sense.

Upgrading the New Orleans follows a similar pattern of American cruisers. The non-researched upgrades we would recommend: Main Battery Modification 1 and Gun Fire Control System to give you the precision you need to fire at long distance. More applied damage is always better. The third and fourth upgrades are going to be very play style dependent, but our previous recommendations stand for the indecisive. Tier eight opens up a fifth slot, allowing you to choose a Target Acquisition System or Concealment System. Hanging back and avoiding the enemies gunfire is still recommended; battleships, Japanese torps, and other New Orleans can make short work of your hull. Therefore, being able to see your enemies 20% sooner seems to be the most beneficial and the Target Acquisition System edges out the Concealment System on the American cruisers.

The Baltimore is a rather large departure from the previous tiers. It is the first ship to have stronger hitpoints and armor than the IJN’s Ibuki. While still sporting strong AA, it actually starts out with AA that is weaker than the upgraded New Orleans. This is rectified with its 1948 upgrade. The primary guns are identical to the New Orleans, though get a better boost to rate of fire after the upgrade at 4.6 rounds per minute but suffer almost a kilometer less of range compared to the New Orleans and the Ibuki. Top speed is down compared to the IJN as well.

Starting off, absolutely pick up non-research upgrades. You will be in this ship for a bare minimum of 40,000 research and sinking before you were useful to your team gets expensive fast. More than ever before, you should be filling a supporting role on your team and not trying to brawl on your own in spite of your new found resilience. When used as a supporting craft, you can provide good anti-aircraft cover for battleships as well as strong anti-destroyer and anti-cruiser capability while the battleships engage each other from long distance.

The pinnacle of American Cruisers, the Des Moines is everything you like in the American line amplified with a little extra. Nine rapid firing eight-inch guns spread over three turrets supported by twelve five-inch guns as secondary batteries makes this cruiser a force to fight. The Des Moines sports almost battleship levels of armor and hit points, but unfortunately near battleship rudder shift time and detectability to match. Top speed, however, is a strong 33 knots with a rather tight turning circle. In stark contrast to the other high tier American Cruisers, though, range is lacking. The AA is fantastic, though still below that of the Montana, so provide cover for more range focused ships that have weaker AA like the IJN cruisers.

With fast firing cannons with decent tracking, strong secondary batteries, powerful AA, respectable speed, and the best cruiser survivability, your role should be very clear. You still cannot go toe to toe with battleships or packs of cruisers, but you can provide a strong screen against fast moving destroyers, aircraft, and other cruisers for the longer range ships like battleships and Japanese cruisers. Placing your Des Moines at the front of the pack will allow your team some breathing room and the enemy team a fierce wall to try to break through. Damage controls to help soak up the damage combined with a well skilled commander will allow you to drive home the strengths of the Des Moines. Volume fire is important, so picking up the Main Battery Modifications 1 & 2 will keep those guns firing fast.

The United States Navy tech tree is filled with strong contenders across the board, and the American Cruisers are strong all the way through. The ship will never be useless regardless of who you are up against. While some ships in the game fall solidly into the “skip with free XP” category, we have found that all of the US ships bring something to the table. With the proper technique, assisting your team and bringing home the win is an enjoyable exercise in teamwork, skill, and patience. A lone cruiser is an easy target to wipe off the map, but a squad of cruisers will make any opposing force think twice about engaging. What has been your favorite American cruiser to captain?