This is a shocking turn of events from the 150 billion ISK battle fought over the Pandemic Legion Astrahus in GE-8JV on May 10.  However, this time Pandemic Legion did not show up to defend any of their structures. 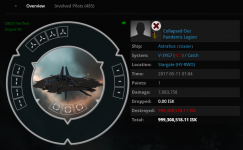 A Battle of Expectations

With five minutes left on the Astrahus structure timer, almost 600 people were in V-3YG7 local. Most of which were members of TEST Alliance Please Ignore, Circle-of-Two, and Brave Collective. Approximately 125 of the 600 were pilots from Goonswarm Federation, The Bastion, and Tactical Narcotics Team who arrived in a Jackdaw fleet to third-party on any skirmishes that broke out.

TEST Alliance Please Ignore projected the biggest show of force by fielded a massive Maelstrom fleet to assault the citadel. Circle-of-Two also fielded a large Hurricane fleet in anticipation of a Pandemic Legion counterattack. But when Pandemic Legion fail to show, all parties involved shifted their focus to killing the Astrahus. Even the third-partying Jackdaw fleet got in a few volleys. As one would expect, the unfit Astrahus melted quickly under the fire of hundreds of ships.

The only real action happened a few jumps away in 3GD6-8 when the TEST Maelstroms managed to catch the Goonswarm Jackdaws while they were trying to tackle stragglers. Massively outnumbered and outgunned, Goonswarm took heavy losses, but a large part of their fleet managed to escape.

A few days later, the Pandemic Legion Astrahus in GE-8JV Astrahus fell as well. It seems strange that Pandemic Legion would let this Astrahus just explode after losing 150 billion ISK trying to defend it on May 10. Unlike the other unfit citadels that have been destroyed in Catch, this was the most valuable. Not only was it fully fit, it was also located in a strategic location. Anchored in Brave Collective’s staging system, the Astrahus could have been used as a forward staging outpost for causing absolute chaos to the residences of Catch. 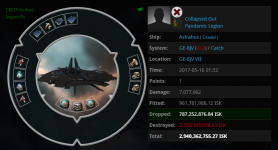 The death of the GE-8 Astrahus is confusing. Why would Pandemic Legion even bother to defend it if they were just going to let it die? It seems as though after losing nearly seventy-five times as much ISK as the structure is worth trying to defend it that they just gave up. However, I have a strange feeling that a new PL Astrahus could be anchored in GE-8 sometime soon.

At the moment, Pandemic Legion no longer have a significant influence in Catch. The whole ordeal seemed pretty pointless. Maybe they were just bored and just had too much ISK burning holes in their pockets. Will they return to cause trouble in Catch? Probably. However, as of right now they seem to be withdrawing.

It seems to me that this has turned into a new meta of space trolling. The practice of quickly anchoring cheap structures in hostile space to force the residents to deal with a week worth of timers in order to kill them. Back in the day when it was only POSes, this wasn’t a huge issue. The whole structure bash took just over twenty-four hours. Now, not only does it take a week to destroy, but the aggressors now have a place to dock in your system. It is migraine-inducing levels of annoying.

Unfortunately, it is up to CCP to recognize that this as a potential problem and make the appropriate tweaks to citadels accordingly.