Growing up, I’ve always been around grills, meats and cooking. Every weekend my dad would fire up the grill on Friday night and deliver some sort of flame-soaked goodness to our plates. From an early age I learned how to start and manage the fire on a charcoal grill (a right of passage) and I was taught that part of being a man and learning to survive was learning to cook and prepare savory, delicious food. In the fall of 2009 I had the opportunity to work as the key production assistant on a traveling reality cooking show called BBQ Pitmasters and as you might imagine, it was a transformational experience. As we wind down the clock on summer and get ready for fall, my hope is that I can share some of my BBQ knowledge with you so you can get out there and make some BBQ magic and level up your culinary skills.

The first season of BBQ Pitmasters was shot on the road at various national BBQ cooking competitions like the American Royal in Kansas City and even more local events like the Murphrysboro BBQ cook-off in Murphrysboro, IL . Unlike following seasons which were shot in a much more controlled environment, we (the crew) got to experience just about every part of America and every style of BBQ under the sun.

Not only was the variety of BBQ styles mind-blowing, but the tips and tricks for getting food ready for competition would range anywhere from impressive to downright bizarre (like glazing ribs with a mixture of Coca-cola and Maple syrup). One thing I want to note though is that cooking for competition is different than for how you should cook at home. Competition BBQ is not the type of stuff you want to eat in platefuls. It’s made to be remembered in one bite, because one bite is all you get to impress the judges, so you have a pack a lot of flavor in a small area. That said, there’s a lot of basic rules that do not change, the golden rule being: low and slow. 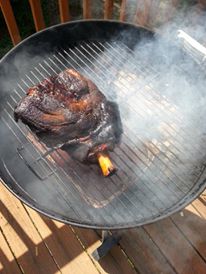 The best way to practice the laws of “low and slow” is to go forth and smoke some pork butts. Pork is a very wide ranging meat to cook. Some parts of the pig cook completely differently than other parts, this is part of the reason why “whole hog” competitions are so incredibly difficult because cooking a whole hog requires cooking and balancing the heat just the right way on parts of the hog so that some don’t get too done and others are not served raw. Pork butt is probably the most forgiving thing to cook because of the way the meat is structured, it has lots of connective tissue and fat, which, when heat is applied, will break down and “tenderize” with fairly minimal effort. Unlike brisket which has a tight window of “done-ness” before it gets overcooked and chewy, the loose structure of the collagen in pork shoulder allows it to be fairly forgiving, even if too much heat is accidentally applied. We can talk about brining, injecting, and other various tricks that you might’ve seen on TV to “enhance flavor,” but the reality is that adding complexity is not always a good thing. The formula for quality meats is:

Where most people go wrong is with the seasoning. Again, too much complexity messes it all up. Keep your seasoning simple. Most barbecue rubs are a generous mix of salt, brown sugar, and paprika with additional support from garlic powder, onion powder, celery powder, and cayenne. Lately, I prefer to leave brown sugar out of my rub because brown sugar will often caramelize early and start to burn, at least that’s what I learned from a former BBQ champion who now runs his own BBQ shop and sells his own rub (which is amazing) so check it out for yourself . The best pork butt I have ever had was made with this rub so now I basically swear by it, but feel free to try different stuff, after all, our taste buds can be quite different depending on where we live.

The last bit I want to preach about is the importance of maintaining a consistent temperature throughout the entire cooking process. The best way to do that is to check your meat and grill’s thermostat every 30 mins to make sure you are maintaining a temp that is +/- 25° from 225°F. Lastly, you want to make sure you cook for about 1 hour per pound of meat. That said, plan accordingly.

Brining – this process refers to a common method in meat preparation where a piece of meat sits in a liquid that’s typically a mix of something like apple juice, water, vinegar, sugar and salt for a few hours before cooking. I’m personally not a huge fan of this step when it comes to cooking pork shoulders, but I will often do it for pork chops or smaller cuts of meat.

Injecting – This is very common in the competitive BBQ world and is often done wrong. My advice to the backyard chef is to skip this step. Essentially you are adding the same stuff that you use in a brine – to the inside of the meat. What often happen though, is that people inject too much and the collagen breaks down more than is necessary making an almost canned “sloppy joe” style product which tastes like brine, instead of meat.

Mop Sauce – A mop sauce is a mix of apple juice and vinegar with other seasonings like salt/pepper/cayenne/whatever that gets “mopped” over the meat periodically to keep the outside moist. For me, the jury is still out in whether or not this process is absolutely necessary. I’ve done it and I’ve done without it. For the most part, I notice very little difference either way and I say it is more or less “optional” for those of you looking to add complexity. Just remember: keep it simple.

Steam hacks – Of all the ways to add complexity this is the best one, especially if you have a smaller cooking environment and you cannot depend on getting a consistent smoke going because you are always having to add in wood chips. So, get a foil baking pan and fill it with water, put it next to the pile of coals but directly below where your meat will cook. If you are maintaining a temperature of around 225°F your water will boil or start steaming which will help add to the tenderizing process of your meat. You can also use beer or apple juice. Whatever floats your boat.

The Most Important Thing

Have fun! BBQ is as much a social activity as it is a serious culinary art but it is important not to take it too seriously. Now, if you want to spend several thousand dollars on a BBQ chariot and roam around the country seeing how your meat measures up to others, that’s totally cool too.