Command destroyers have been a staple of the game for a very long time, fitting the role of a Command Burst ship for smaller fleets of frigates and sometimes cruisers, where command ships, battlecruisers and strategic cruisers were too slow to follow the fleet in velocity, warp speed or align time.  But recently they’ve been used much more than previously, in a way that I don’t believe was intended by CCP to this extent.

Recently something has changed; people finally had enough of large null security space groups like Goonswarm Federation and other similar groups dropping endless streams of supercarriers, titans and faxes on their fleets hunting, immediately annihilating the hunters’ fleet with fast fighters and Bosonic Field generator Doomsdays unless they leave their target and cut their losses. The hunters decided that enough was enough and found a way to fight this blob of capital ships. The way they did this was to abuse the previously underutilized Micro Jump Field Generator module on command destroyers to move large fleets of smaller ships around, mostly T2 frigates with a couple of strong destroyers mixed into it for variation. The Micro Jump Field Generator is a command destroyer exclusive module that spools up over a few seconds and then jumps everything within 6 kilometres, 100 kilometres in the direction the command destroyer is facing.

The module was released back in 2015 along with the command destroyer ship class and already back then the idea of “chain booshing” was discussed by CCP as an interesting way to use them. While the way they’re used today might not be an intended one, or a wanted one for anyone involved, it isn’t a surprising one either considering the response to hunters in most areas of Null Security and it has almost been forced into the meta.

Bombers: Not the Problem you are thinking of

Command destroyers by themselves have never been a problem; their offensive capabilities are weak compared to other ships in the current meta, with most of them having the same or less than their T1 counterpart, apart from the Bifrost (I love you Bifrost and you will forever be one of my favourite solo ships). From the release of these ships they were made to be fast and tanky with a lot of options for supporting a fleet, with the Micro Jump Field Generator to move large fleets around and command bursts to significantly increase the strength of fleets, and this has been mostly what they were used for and even are today. Many people understandably point the blame towards the other ships in recent command destroyer fleets as the balance issue as command destroyers have never previously been a problem.

The blame usually goes to either bombers or Kikimoras, as bombers in these fleets are widely disliked for their high alpha and dps at high ranges for their ship class with the average bomber doing between 400 and 500 dps at 60 kilometres. This combined with their ability to launch fleet devastating bombs that are able to deal damage and even do capacitor warfare depending on the type of bomb means they’re incredibly strong and versatile for their ship class, bringing both high damage and utility, even when fit with a strong shield tank at 10,000 Effective Hitpoints (EHP) before command bursts and heat.

The Kikimora is a completely different ship that is also used in these types of fleets but for a completely different purpose; while the bombers apply both capacitor pressure and dps, they have terrible application against smaller, fast moving ships even if the haters of them like to pretend that they kill everything. Kikimoras solve this purpose, killing everything that tries to get within range of the bomber fleet to give a warp-in for a larger fleet or tackle the fleet members. While I would argue that there’s no problem with bombers as they’re strong but have significant weaknesses, Kikimoras are certainly too strong with no apparent weaknesses anywhere; they apply up to 540 dps at max spool and heat at 45 kilometres and even more at closer ranges, they have a pretty sizeable tank for a T1 ship, the standard fit for these fleets pushing 12,000 EHP. And most of all, which makes it such a superior ship to the other options available, it has the tracking of close range blasters, even at 45 kilometres, which makes it incredibly easy to kill fighters, interceptors, interdictors and other tackle as you’ll track almost everything perfectly where other similar ships like a long range Harpy would struggle.

But, when all of that is said, this is all not a problem as there are many doctrines that would annihilate such a fleet in similar numbers and even with less numbers as the bombers would be deadweight against a smaller ship not in bomb range. A simple Jackdaw fleet would easily kill a fleet of bombers and Kikimoras with logistics as they have superior range, speed, tank, and application, and as a result much better alpha, killing such a max tank bomber in only 10-12 volleys which is easy to get in a 100 man Jackdaw fleet. No, the problem comes into play when you’re not able to touch the enemy fleet of Kikimoras, bombers and support ships because they’re out of range, and by the time they get within range, it’s to launch a wave of bombs at you that will destroy your entire fleet if you don’t move out of the way, which is extremely difficult to do with such a large fleet unless the bomber fleet commander isn’t experienced and doesn’t line up the bomb volley. Mostly this sort of positioning in larger fleets is done by fitting Micro Warp Drives (MWDs), but the usage of command destroyers in these fleets has changed that drastically.

Every Sig Matters: Fitting a Fleet

Most ships in these fleets fit afterburners. This saves them fitting as they only require a fraction of the CPU and Power Grid. This also means they can avoid all the harmful weaknesses of MWD such as the heavily increased signature putting them on par with battleships and the reduced maximum capacitor, making bombers cap completely unusable while running it as bombers have notoriously weak capacitors. Here’s a pretty generic example for one of these bombers; in this example I am using the Manticore as it is one of the easiest to fit for the purpose: 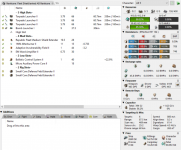 If you look at the CPU and Power Grid you can see that it is quite close to maximum on both with 99.52% CPU used and 95.39% on Power Grid. Compare the Power Grid and CPU usage of the afterburner with a Compact MWD, using a compact one for the sake of argument.

It’s quite clear that even a compact MWD wouldn’t fit without gimping the fit or paying extra for it to make room for 6 more CPU and the 3 extra powergrid, let alone a restrained MWD that takes further fitting. On top of this the MWD’s signature increase makes them worse at taking the fights these fleets usually prefer, which is taking on capital ships like carriers, as the sig increase to 361m from an otherwise tiny 61m makes carriers able to deal huge amounts of damage to the slow bombers. These fleets rely on being able to fit afterburners, as this module let them reduce the application from carriers to a fraction of the damage it’d otherwise apply with the speed provided by it, without sacrificing signature. But these weaknesses lead me to the next point in the article, the main point to be exact, about command destroyers and why many people consider these fleets such a huge problem.

The Outsourcing of Mobility

Command destroyers take the skill expression of people timing their MWD when they’re needed and the weaknesses of having to fit a MWD to have enough mobility in a fleet to dictate ranges away from the people flying bombers, Kikimoras, logistics and other support ships, and instead dedicate another ship do it for them. In this scenario, only the command destroyer gets a signature increase from the Micro Jump Field Generator which lasts for only 7 seconds and is used at most once every 160 seconds per command destroyer compared to an MWD having to be fit on all ships to keep up, and you would have to permanently run it if you were in a fleet fight as bombers are quite slow for frigates.

Comparing the signature increases between the Micro Jump Field Generator and the MWD reveals another significant reason as to why the micro jump drive is preferred. A restrained MWD has a 450% signature increase which leaves a standard Stork at 300m signature even with its 50% role reduction to signature penalty. Meanwhile the Micro Jump Field Generator only has a signature increase of 150%, leaving the same Stork at a mere 200 signature. A signature increase to even 200m would be extremely bad for the bombers, let alone the full 450% as they don’t have the EHP to survive carriers or the resists for logi to save them in time, but the Stork does. A Stork for one of these fleets has upwards of 30,000 EHP with the lowest resist at 75.5%, both of which are before command bursts are applied. Compare this to a bomber with only 10,000 and the lowest resist being 58% and it’s clear which one will survive the longest.

In conclusion, the problem with these fleets is not the Kikimora or the bombers as many people believe, it’s the ability to circumvent the weaknesses tied to high mobility fleets from the use of the MWD module. The use of command destroyers let fleets gain the benefit of high mobility without any of the standard fitting penalties and weaknesses on other ships you usually suffer when using MWDs instead of afterburners. Only the command destroyers, the tankiest ships in the fleet, will suffer the weaknesses of increased signature, and instead of having to suffer the increased signature for most of the fight, it’s only for 7 every once in a while for the same amount of mobility or more than an MWD fit fleet would give. In a best case scenario the bomber fleet gets forced off, but worst case scenario you get bombed and lose your fleet, there’s no scenario where the bomber fleet is killed unless their FC makes a huge mistake.