The Art of War: WWB and TEST

Author’s note: This article, the second in a three-part series, focuses on TEST. Click here to read part 1. Look to a future issue of INN for analysis of the end-game scenarios for the Imperium.

As World War Bee continues, we look for analogous situations in other realms of war to help us understand how this conflict might play out. In New Eden we have the Imperium, surrounded on all sides, with the enemy at the gates. Similarly, in the Battle of Stalingrad, German forces had Russia back on its heels. The Germans had made huge conquests through Soviet territory to reach Stalingrad. A German victory seemed certain. The Russian nation had been largely overrun; all hope appeared lost. But at Stalingrad, the Russians managed to hold the opponents at bay until they mounted a Russian counter-offensive. Then, in one of life’s ironies that only occur in films and in real life, the Russians turned the tables and surrounded the German 6th army, eventually crushing their spirit and causing them to surrender after a siege of over five months.

In New Eden, we see that much territory of the Imperium was overrun and structures destroyed. Fountain fell into the control of Pandemic Horde (REKTD) for a time. While the Imperium has regained much of that ground, Fountain remains not particularly well defended. TEST/Legacy, to the southeast and east, continues to try and find a foothold in Period Basis or Querious, especially the latter. But the gains for PAPI have slowed down in recent weeks. At this point in the war we would do well to analyze what the end-game scenarios look like for TEST. After all, those who wish to fight must first count the cost. Assuming TEST counted the cost before entering this war, they possibly ran through the following three scenarios:

In this possible future, TEST gets its stated wish and the Imperium has been exterminated. But TEST’s leadership realizes that in nature and in EVE, you can’t have empty space. Some group will fill the areas once held sovereign by the Imperium—that’s inevitable. Pandemic Horde, by week eight of the war, claimed all of Fountain. They will doubtless claim it again should the Imperium be wiped out and Fountain re-conquered. TEST must hope that those gains will satisfy REKTD.

If TEST allows the Horde to take over even more territory, Horde may be the most powerful alliance in EVE. The problem for TEST with this best-case scenario is that they, TEST, are not experiencing similar gains (as of September 18, 2020) on their side of the map—Querious and Period Basis. Querious shows a blue Legacy blob in it, which reminds me of maps displaying the Battle of the Bulge, but so far not much territory has been gained by TEST.

In World War II, the British/American/French forces invaded Germany from the west and the Russians invaded from the east. The Russians were in a position to hold all the territory their troops had conquered (most of eastern Europe up to Berlin). In EVE, that “pincer” movement isn’t taking place. Most of the systems in Fountain are back in the Imperium’s control. So, if Delve is broken eventually via Querious or Period Basis, the “troops” that move in will be composed of pilots from many of the over 100 alliances in the coalition.

How is it possible, then, to divide up that territory among the victors, assuming a victory for PAPI? Do those areas of space become a bunch of “Balkan” states, with everybody claiming a small portion? The September 12 sov map shows that very trend, with PanFam holding a small portion of territory within the greater blue Legacy blob, as if to make sure Legacy understands that PanFam wants a piece of the pie. 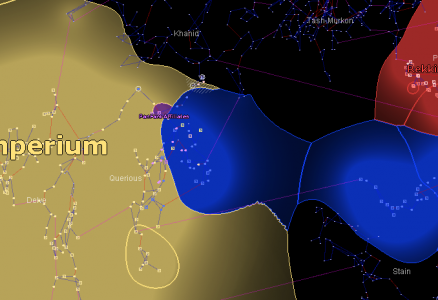 No one will have first dibs. It’s hard to imagine that the same people who fought in this war of “extermination” will be content to go home without any of the spoils. That may be true for TEST, but other alliances within PAPI have suffered greater losses, especially Horde. They may expect tangible rewards beyond just the glory of glassing Delve. TEST must have planned for this very scenario. But it leaves open questions as to who fills the territory vacuum in this scenario of the endgame.

Due to this uncertainty, TEST may have opened the door for the endgame to turn suddenly nasty. If PanFam fills the void in Delve/Querious/Period Basis left by the extermination of the Imperium, its holdings will be huge: it will be north, northeast, and west of Legacy. Indeed, Legacy’s holdings will look a lot like Delve did before this war: sandwiched between opposition on all sides. It’s hard to imagine an insightful leadership going into war with this scenario as an endgame position. 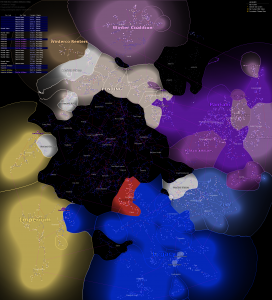 If we look at the daily SOV map of Sept. 20, 2020, we see that PanFam has lost much of the territory gained over the past two months. For a time it controlled all of Fountain.  We see that TEST controls the small blue blob in Querious. What if things were to revert to what they were on September 9? That’s a very real possibility as we have already seen defending Fountain may be impossible. If PAPI makes no further gains in Querious, PanFam is the big winner in this war. In effect, TEST will have helped REKTD become the most powerful alliance in the game.

TEST’s stated goal, judging from the public statements of Progodlegend and Vily, was to eliminate the Imperium from the game. If that destruction cannot be accomplished, if the Imperium bends and shrinks, but remains unbroken, what then for TEST? Pack up and go home? How many titans should TEST lose in this stalemate scenario just to save face and show that it really tried to eliminate the “bad” elements from the game? Would a 50% loss suffice? Say, 300-500 titans blown up before TEST finally calls it quits and heads home?

That would have to be one of the most depressing move-ops in EVE’s long history. We must not underestimate the importance of saving face. Nor the degree to which that motive may come into play in this war. When leaders, or at least perceived leaders, make pronouncements, they risk desertion or mockery if they fail to fulfill on the promises. If PAPI fails to exterminate the Imperium, the Imperium, at the very least, wins the rhetoric, no matter what territory it loses. A stalemate with the current status quo as of September 20 probably must be counted as a loss for most of PAPI (with the exception of PanFam).

“So in war, the way is to avoid what is strong, and strike at what is weak.” ― Sun Tzu

In a very real way, TEST has put itself in a tight spot in this war. Either of the above scenarios just leaves PanFam the huge winners of World War Bee. TEST may have shifted the balance of power in EVE by calling for this action, but the shift might not better TEST’s strategic position. Perhaps all TEST wanted was to shake things up, avoid lethargy, get rivals in each other’s faces. If so, they have accomplished that. But that was not the stated goal of TEST leadership.

On the other hand, lessening the power of the Imperium while simultaneously increasing the power of REKTD leaves TEST no better off strategically. Possibly just the opposite. TEST could find itself in a vice, squeezed by PanFam and by the Imperium, which has vowed vengeance upon TEST for this war. To avoid the squeeze, TEST needs to either take out the Imperium or PanFam, or perhaps make a wildcard move and attack Fraternity. But of course, TEST leadership must know this already and must have prepared contingency plans for just such a scenario.

If the sovereign space of Delve/Period Basis/Querious proves impregnable, TEST would have to look elsewhere to provide the content it craves. Then, TEST will have a weakened Imperium to the east and have a greatly weakened Panfam to its north (due to the destruction of forces in the past two months). If it can’t move east, perhaps it will move north against the momentarily weakened PanFam. Only this scenario makes TEST the most powerful alliance in EVE. Given the large disparity in losses between PanFam and TEST, we may well wonder if this hasn’t been TEST’s strategy all along: let the big dogs weaken each other and then attack when both big dogs are tired and hurting.

If crushing and eliminating the Imperium is the goal of PAPI in this war, as has been publicly stated, and the hypothetical best-case scenario comes into play, it may ironically end up weakening TEST’s position in EVE. The hypothetical stalemate scenario again leaves TEST no better off strategically and strengthens PanFam at the expense of TEST and the Imperium. Only the third scenario, where TEST flips and attacks its own allies, actually strengthens TEST’s position in EVE as a whole.

If you have a better take on possible scenarios for TEST, leave a comment below, or, write your own article and submit it to INN. Let your voice be heard!

Look for an analysis of the Imperium’s endgame scenarios next week on INN.