Welcome to this edition of The Drafting Table, where we look at one of my favourite looking ships in the game, the Typhoon.

The Typhoon has been a ship that intrigued me, since my days of running level four missions near Dodixie. While my initial fascination was with its potential use in mission running, instead of a Raven, I kept coming back to the ship at various times. I never really found a use for it. I tried out a PvP fit shortly before the war, but it didn’t click for me, likely due to lack of skills and piloting experience. When I found a very cheap hull near my testing area, I figured it was time to give it another go.

The Typhoon is a Minmatar battleship, bonused to using various missile systems. For each level of Minmatar Battleship the pilot has, the Typhoon gains a 5% bonus to the rate of fire for Cruise Missile, Rapid Heavy Missile, and Torpedo launchers. This improves the DPS of the launchers, as well as greatly improving the burst potential of RHMLs. Additionally, Cruise Missiles and Torpedos gain a 5% bonus to Explosion Velocity. This improves the ability of those weapons to apply damage. 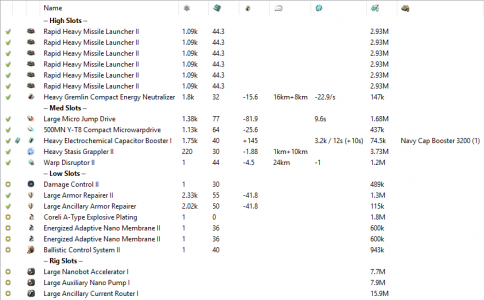 High Slots (7, Six Turret Hardpoints, Six Launcher Hardpoints): Strangely, the Typhoon retains an artefact of bygone design choices, and has a full complement of turret slots. Given the hull bonuses, these should be ignored. I chose to go with RHML, due to their combination of burst damage and application. The seventh slot is occupied by a Large Gremlin Compact Energy Neutralizer, to allow for cap warfare against tackle frigates and other small ships.

Mid Slots (5): These slots are mostly standard for my battleship fits, with one small deviation. First up is a 500MN Compact MWD, to improve manoeuvrability around the grid. Second is a MicroJump Drive, to allow for rapid repositioning and escape. The third is a Heavy Electrochemical Capacitor Booster, which when loaded with a Navy Cap Booster 3200 charge, allows for rapid restoration of a depleted capacitor. Fourth is a Heavy Stasis Grappler-II, to assist with holding ships that get close in place. Where I deviate is with the Warp Disruptor II. I chose this over a scram, as it would ideally provide a larger window, for preventing a target leaving the grid, than a Scram, giving the range of the RHML system.

Low Slots (7): The low slots are almost all devoted to establishing an active armor tank. I chose this over a buffer tank, due to wanting to preserve as much mobility as possible. The tank ability is drawn from a pair of Large Armor Repairers, one Tech II and one Ancillary. The Tech II is intended to provide steady repping power, while the Ancillary provides additional repair capacity during high incoming DPS. This is backed up by the resist profile, formed from a Damage Control II, two Energised Adaptive Nano Membrane and an A-Type Explosive Plating. The last low slot is filled with a Ballistic Control system, to improve the damage output of the RHML both per volley and the rate of fire.

Rigs (3): The first two rig slots are used to improve the tank. A Large Auxiliary Nano Pump improves the repair amount of each repper while a Large Nanobot Accelerator improves the cycle time, allowing reps to land faster. Both of these increase the powergrid needed, so a Large Ancillary Current Router takes up the third slot, to provide the needed powergrid.

Drones (125m3, 100mbit/s Bandwith): My drone bay loadout was focused on the ability to help kill small ships. I packed one flight of Hammerhead II medium drones and filled the rest of the bay with lights.

Bling: There are three places I would recommend throwing some bling at the fit if you are inclined to spend additional money. First is the tank. Both the reppers and EANMs have reasonably priced upgrades, that provide an improvement in raw capabilities. Second is the warp disruptor. Since the plan is to use it to widen the engagement envelope, having some additional range is good. The third is the capacitor booster. The faction variants have a slightly reduced cycle time, which means the next injection of the capacitor from a 3200, is ready just a little bit sooner. Being able to continue feeding capacitor to the armor reppers is important, and that small difference could come in handy.

Implants: Here I would recommend implants to help improve the capabilities of the tank. Slots 1-6 can be filled with the Asklepian set. There are low, mid, and high-grade options to suit various budgets. In slot nine, the Repair Proficiency RP-90X implants improve the raw amount of armor repaired. The remaining slots are more flexible. More armor HP can be added via the HG-100X line, giving your reppers more time to restore HP before bleeding into the hull. The seventh slot is quite useful, either allowing for a boost in damage, from the HM-70X or increasing the agility with the EM-704 line.

I intended for this fit to be better at fighting outside of scram-grapple range, unlike a Hyperion. Once the target was engaged, either a small group or another single pilot, use the burst damage and good application of the RHML, to remove incoming DPS from the field quickly. Use the grapple to hold down close in targets for the drones and missiles, while the warp disruptor keeps the primary pinned to grid long enough to remove them from the engagement. Keep the regular armor repper running, activate the ancillary when incoming damage is greatest. Focus on bursting down targets with scrams first, so you can both use your MWD and get out with the MJD if necessary.

The first engagement I had with this ship was a while ago when I attempted to avenge the loss of the 100mn Phantasm. I warped back to the bubble to engage the two Drakes that had ended the Phantasm’s run. Things were looking good until a Keres showed up on the grid. I was quickly damped down to less than 10km lock range. Unable to fight back against the hostiles, I aligned to a friendly citadel in the system and triggered my MJD. Nobody dove into scram range, and I winked back onto grid 100km away. I was too hasty in trying to warp out and broke my alignment because the game still thought I was pointed. It took long enough to align back that the interceptor that was involved had time to burn across the gap and point me again. Through either luck, skill, or some combination of the two, I managed to keep the ship alive though the 180 second cool down time against the initial gang, plus at least one additional battlecruiser. When the MJD finally activated again, I was more careful in activating my warp drive and successfully entered warp. Then I bothered to take a look at how much hull HP I had. The number matched up with how charred and glowing my hull was, 5% left. To date, this is the only time I have managed to save a battleship after messing up an MJD escape.

The second engagement was shorter. Seeing as the insurance on the hull was coming up soon, I decided to take a little roam through a small nullsec pipe. It was very quiet until I ran into a small gang that had a Curse. With its neuting power, my active tank stood no chance of holding. With my capacitor dry, moments after popping my capacitor booster, the gang made quick work of me. Unfortunately, there is not much you can do in that situation. I had no safe warpouts in the system, so even getting out with the MJD would only have netted me another couple seconds of life. 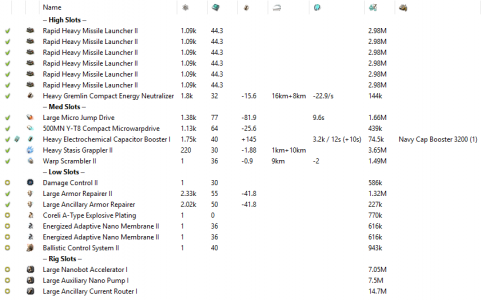 There is only one change I would make when I pick this fit back up again. Tho I still think the Warp Disruptor has merit, equipping a scram might have proved more useful in the first engagement, due to the artificial limits on my lock range. Further testing would be necessary to see just how different that would make this fit fly. The other aspects of this fit worked alright, tho with the upcoming nerf to RHMLs, it might be a good idea to attempt to change to cruise missiles. Given the difference in fitting requirements between an RHML and a cruise launcher, some reworking will be required. Perhaps this will need to be revisited after the RHML nerf.

I really enjoyed taking the Typhoon out for a spin. It’s a fun ship to fly, and if missile boats are your jam, it’s a potent choice. Got any comments on the fit or something you would like to see me take a crack at? Hit me up in the comments. Until next time.