For those wondering, the title is accurate and you may commence your roasting of me in the comments now. The Drafting Table takes a turn to the strange this time, looking at a Caldari battleship with a distinctly non-Caldari weapon system. The Scorpion steps into the ring.

This fit came about for two main reasons. First, I had a Scorpion hull kicking around. I don’t like keeping hanger queens for the sake of it. Sporting the attractive Valkyrie skin this lady wanted out and it was time to oblige her. However, I did have a problem. The only Scorpion I have flown in the past was Rapid Heavy Missile Launcher–fit. I currently have two other RHML-equipped battleships. So I decided to something different; something that lead to one of my corpmates going “NO! Bad Robby!” Of course, now I had to do it, because it got such a forceful response. Despite feeling the newspaper being swung at me, I gave it a go anyway.

The Scorpion is a Caldari Battleship with a unique set of bonuses. Per level of Caldari Battleship, Electronic Countermeasure (ECM) Jammers of both the targeted and burst flavors get a bonus of 15% to jam strength and a 25% bonus to Optimal Range and Falloff. While these do open up some interesting opportunities, what is more interesting is what the Scorpion lacks. Unlike any other battleship in the game, the Scorpion does not possess a bonus to any weapon system. While this means any weapon system is less effective compared to a more specialized hull, it does open up the opportunity for some crazy things. 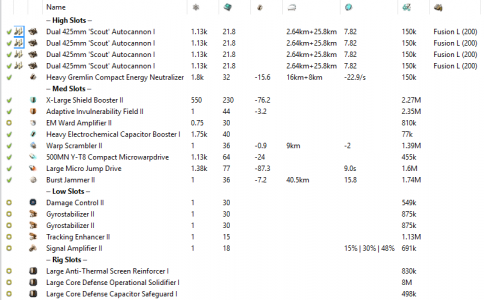 High Slots (5, Four Turret Hardpoints, Four Launcher Hardpoints): Here is where I chose to go way off the beaten path. The four turret hardpoints are used to equip four Dual 425mm ‘Scout’ Autocannon I’s. I chose this variant both due to the fitting room, and because I cannot use Tech II Large Projectiles. The last slot is occupied by a Heavy Gremlin Compact Energy Neutralizer, to provide a cap warfare element to the fit.

Mid Slots (8): With plenty of mid slots, the Scorpion lends itself to shield tanking. Forming the tank are three modules. First is an Extra Large Shield Booster, second is the ubiquitous Adaptive Invulnerability Field II, and last is an EM Ward Amplifier II. These combine to give a decent resist profile along with a large amount of hitpoint restoration. Next is the Heavy Electrochemical Capacitor Booster I, which allows for massive restoration of available capacitor through the use of Navy 3200 cap charges. A Warp Scrambler II serves as tackle. Two prop mods occupy the sixth and seventh slots, a 500mn Y-T8 Compact Microwarpdrive for on-grid maneuverability and a Large Micro Jump Drive for escape and rapid repositioning. The eighth slot plays into the bonuses of the Scorpion hull with a Burst Jammer II. Capable of breaking the target locks of any ship within range, the burst jammer is a major asset in keeping the incoming damage down.

Low Slots (5): Beginning the low slots is the common Damage Control II, which adds to our resist profile. To enhance the capabilities of the 425mm guns, two Gyrostabilizer IIs and one Tracking Enhancer II are equipped. The former increase the damage output while the latter increases the range and application. The final slot is occupied by a Signal Amplifier II, which improves scan resolution and sensor strength, making the ship lock faster and be more resistant to having its lock broken.

Rigs (3): The rig slots are used to improve the tank, both in effectiveness and longevity. First is an Anti-Thermal Screen Reinforcer I, which patches the lowest resist after the mid slots and the damage control are applied. Second is a Core Defence Operational Solidifier I, which decreases the cycle time of the shield booster, allowing it to restore hitpoints faster. Last is a Core Defence Capacitor Safeguard I, which reduces the capacitor needed to activate the Shield Booster.

Drones (75m3, 75mbit/s Bandwidth): The drone bay is capable of holding two useful combos. It is a choice between one flight of lights and one flight of mediums, or three flights of lights. I chose to go with the former and picked Amarr drones (Acolytes and Infiltrators) due to the combination of speed and application.

Bling: This fit is meant to be disposable and fun, so I don’t recommend applying bling to it. If you want to spend some additional money, there are two places I would apply it. First is the Burst Jammer. With the bonuses, the higher base values you can get, the more effective the jam will be. While being roughly twenty-two times more expensive, the Sentient Burst Jammer has .8 more jam strength. With Caldari Battleship V, this becomes 17.5 to 15.8 jam strength in favor the faction variant. Second would be the tank. Faction or Deadspace XL Shield Boosters can be reasonably priced, and a Faction EM Ward Amplifier can also be picked up for a reasonable amount.

Implants: As with the bling, I would not recommend purchasing a set of implants specifically for this ship. As with other active shield tanking ships, the Crystal set would help improve the tank dramatically.

What lead me to take this fit out was oriented mostly on providing a hilarious lossmail while having fun doing it. I planned on engaging a small gang and attempting to live for as long as possible. Using the Burst Jammer to keep the incoming DPS as low as possible, and with careful capacitor management, I might be able to keep someone locked down long enough to kill them.

For the first time in a long while, things actually went sort of according to plan. I had two really fun engagements with this fit. First was taking on a Co2 gang headed up by a Harbinger. With the help of a local, the Harbinger went down and the three frigates along with him were forced off grid. A few days later, I jumped into an Interceptor gang and was able to keep up an engagement with them for over six minutes before an NC. gang jumped in and finished me off quickly. Surprisingly, I killed one of the interceptors. On seeing my lossmail, on of the NC. pilots extended a helping hand in local.

Considering I actually got kills for the first time in a while during testing, I think I did just fine.

I had so much fun with this fit, both for its capabilities and the amount of rage and befuddlement it induced, that I don’t think I would really change it. I did feel the lack of a web, but that was augmented by only having one flight of light drones. That single flight did not last long when focused, so left me without their anti-light ship capability. That capability was really needed, especially in the second engagement. I would see how it flys with three flights of lights before looking at adding a web. 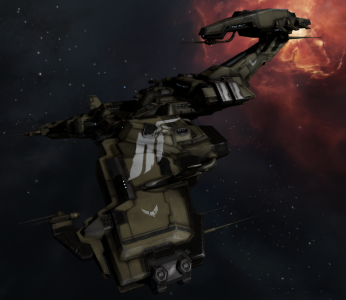 Also, the Scorpion gets the good looking Valkyrie SKIN. Shown here in the ship preview as mine sort of exploded.

Another great feature of this fit is how flexible it is with the weapon system you choose. If you want to rock something other than Dual 425’s, just swap them out along with changing the Gyrostabilizers to the appropriate damage mod. Depending on the specific system, you may need one of the EG-60X line of implants to get enough powergrid. Yes, it even works with Rapid Heavy Missile Launchers.

I hope my take on the Caldari State’s premier electronic warfare battleship with a Minmatar twist proved as fun to read about as it was to fly. Got any questions about this fit or another ship you would like to see me tackle here? Shout out in the comments. Until next time, fly crazy.

Is Game Design a Numbers...

Where should CCP's priorities be, when it comes to game...