Subnautica — You Can Take The Sky From Me

In 2012, James Cameron boarded a custom built submersible and dove – alone – to the deepest section of the Mariana Trench. A place called Challenger Deep. At almost 36,000 feet, it is the deepest place in the world.

While space may be the final frontier, the depths of Earth’s oceans are a true undiscovered country. Scientists learn more with each descent, but it is hardly enough to unravel the mystery and intrigue of the deep.

It takes truly intrepid individuals to comfortably venture so far beneath the waves. Especially considering the extreme dangers associated with deep sea exploration. Yet they do so anyway, thinking only of what can be learned from such risky operations.

Personally, I find open water terrifying. Generally, I avoid circumstances that would require me to enter anything larger than a swimming pool. But on my honeymoon, I was convinced by my wife to go snorkeling in Roatan. The reef was pretty, but I wasn’t prepared for what lay just beyond.

One moment, we were twenty feet above the ocean floor, then the next, we were at the edge of the sea wall. The rocky cliff face dove into the deep, disappearing somewhere in the dark hundreds of feet below where I hung, suspended in the clear blue water.

I had never felt so unsettled in my entire life.

The thought that anything could be in that water was tangible in that moment. So much so, that I was less than happy to turn my back to that endless abyss.

I get the same feeling in Subnautica.

The game begins with a dash of hopelessness.

In the opening cutscene, an unnamed main character drops into an escape pod and jettisons from a crashing vessel – the Aurora. The character catches a fleeting glimpse of the burning wreckage, before he is knocked unconscious by loose debris on the inside of the pod. He wakes up later, trapped in his chair, a fire burning nearby.

The player’s first act in Subnautica is to put said fire out, then climb out of the pod to assess the situation. 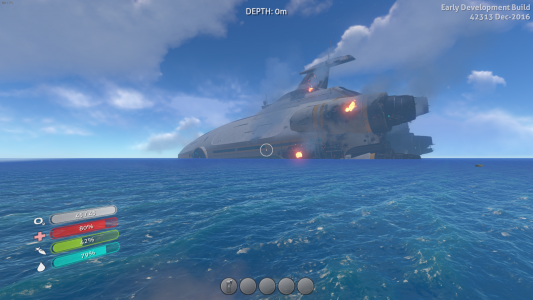 The hopelessness of these first few moments is immediately offset by the wonder of diving beneath the waves for the first time. The game’s first area is called the safe shallows. And that moniker perfectly describes where the player is. The flora and fauna of this region are generally docile. Some don’t seem to care about the player, while others actively flit away – afraid of becoming this strange new predator’s next meal. 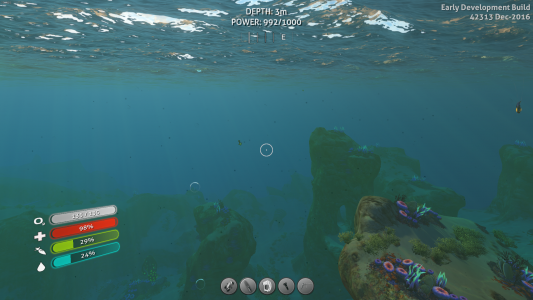 Despite my fear of open water, the safe shallows region fostered a feeling of genuine calm in the first few moments of play. And, generally, that calm was never shattered as I swam along, gathering the resources required to repair my broken escape pod. Nightfall did introduce a level of apprehension as light levels dwindled, but all that changed was the luminosity of the flora and fauna that inhabited this zone.

And though I wasn’t sure what lay beyond the boundaries of the shallows, I was curious. If this small section of the game was so beautiful and lively, wouldn’t others be, as well? What else was there to discover beyond the safe shallows? I aimed to find out, but I wasn’t really sure how.

But, the game knew just how to nudge me into the abyss.

There is only a bare bones tutorial in Subnautica, so the onus is on the player to learn how to survive – and thrive – in its wholly alien aquatic environment. Luckily, the basics are easy enough to figure out. The escape pod contains a crafting station that the player can use to cook some fish, and extract water from others. Thus, the pod functions as an early base for the stranded player.

But the pod is damaged.

Repairing the pod isn’t necessary, but doing so seemed (to me) a logical first goal in an otherwise unguided experience. The drive to fix the pod that was keeping me alive was enough to nudge me past the limits of the safe shallows – into a kelp forest. This biome is more dangerous than the first, but contains valuable resources. Once harvested, I was able to fully repair my pod.

Among the gadgets I repaired was a communications array. Once active, messages begin pouring in from other survivors. A few, it turned out, managed to escape from the Aurora before its collision with the surface. Some message are accompanied by coordinates, while others are purposefully vague. Of the provided coordinates, some are closer than others, but all are outside of the safe shallows

It was then, that I ran into the first true test of my resolve. Would I venture forth from the safe shallows, into the deeper areas of the game? Or would I relent and stop playing?

I chose the former option.

With all the tools at my disposal, I ventured away from my pod. Into the unknown.

The farther from my escape pod I got, the more unforgiving the ocean became. But with the increased difficulty came increased rewards. 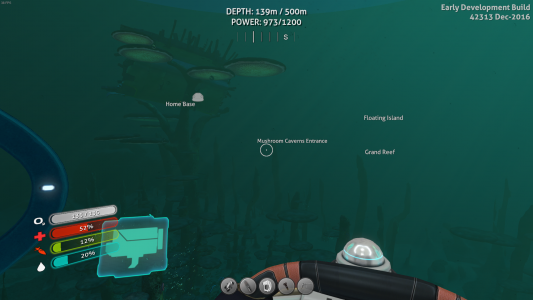 Bits of the Aurora are scattered along the ocean floor. Each is home to scannable technology, each specifically designed to make the player’s survival that much easier. Some are base components, while others are tools – either for the player or for the submersibles the player will eventually be able to construct. 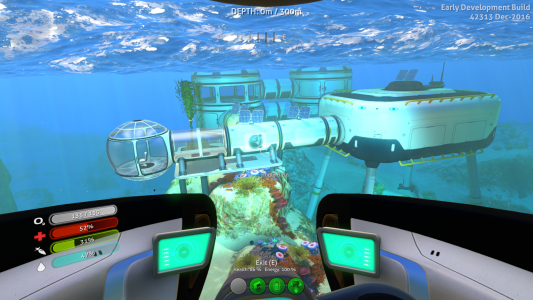 This can be frustrating, but the answer is often to explore until either the resource or blueprint is discovered. At first, I had real difficulty understanding this concept mainly because of my unwillingness to dive deeper than I was comfortable with (or to venture forth at night). But once this apprehension is overcome, there is a wealth of material to discover below the waves.

Including a narrative, of sorts…

A Series of Unfortunate Events

The story in Subnautica is far from complete, but the developers have already gone a long way in outlining the robust history of Planet 4546B. Most of the information can be discovered in PDAs scattered throughout the game world. Some are located within the wrecked remains of the Aurora, while others are elsewhere.

And, frankly, there’s a surprising amount of information to discover. A few scripted events lead players to set locations, but the rest of the story is only discovered through aggressive exploration of the planet’s varied biomes.

Without spoiling anything, there’s much more happening on Planet 4546B than meets the eye. And though finding every PDA might take a while, it’s definitely worth the effort. The pieces come together to paint a very vivid picture nearly as detailed as the most robust RPGs.

Impressive, to say the least.

While there is plenty to discover near the surface, most of Subnautica’s secrets are kept in the deep. And the game actively drives you to explore these places. Many of the gadgets and PDAs are hidden far beneath the waves and only the most intrepid explorers will be able to reach everything the game has to offer.

This is where fear enters the equation. 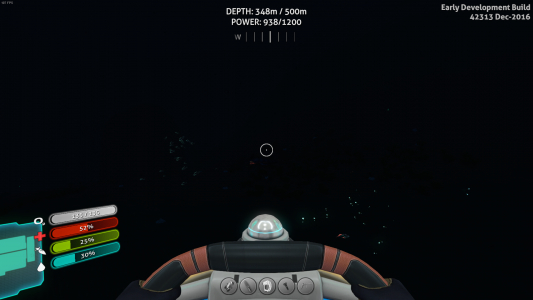 Eventually, the player has to delve past the shallower areas of the game, and into the abyss. Many of these areas are so deep that light simply doesn’t reach them. Others are caves that house secrets, and hostile creatures not found anywhere else.

Personally, I’ve only been able to reach a depth of 500m. I know that there are a few places well below that depth – places that have to do with the game’s main story, and others that are simply areas of interest. I’m slowly working my way to these places, but the denizens of the deep make safe travel to these areas nearly impossible.

Nearly everything that lives in the depths of Subnautica’s oceans are hostile. And some are much bigger than others…

Size is sometimes a difficult thing to decipher in Subnautica, so let me provide some context for the above video – the submarine I’m piloting is almost 200 feet long! That thing is huge…and predatory!

Other creatures appear as you go deeper, and are equally hostile. 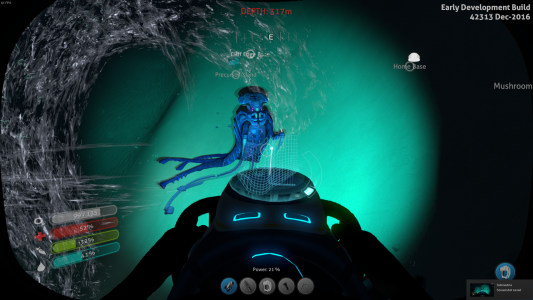 And in the deepest sections of the game, even more horrifying creatures await. I can honestly say that I’m not looking forward to such an expedition…

Despite my deep seated fear of open water, Subnautica has me hooked. While I’m often unsettled by the environments, or afraid of what might glide out of the deep, the game has a certain charm that is undeniable. The developers, Unknown Worlds Entertainment, have crafted a truly awesome world.

There are a few hitches worth mentioning, however. Sometimes, the menus lighten to the point where they are almost unreadable and there is a glitch that currently causes the game to stutter (as can be seen in the video above). But these are minor quibbles compared such an excellent offering.

Subnautica is currently still in Early Access on Steam and I typically caution those interested in titles not yet fully developed. But in this case, the developers are involved in the community and release regular updates.

The game is worth every penny of the $19.99 price point, but can be found for less during a sale. If you enjoy a good adventure game and are looking for something a bit different that what is usually available in the sci-fi survival genre (Astroneer, Space Engineers, Osiris: New Dawn, etc.), then Subnautica is definitely worth a try. And since more major updates will undoubtedly arrive in the future, you can count on me to keep you updated on all the cool stuff that gets added.

Until then, you can find me at the bottom of Planet 4546B’s ocean. Probably in some creature’s belly…