Eight teams will meet in the arena on the 20th and 27th April in edition 2 of the Streamfleet Showdown Invitational (SSI), broadcasted live on the Streamfleet Twitch channel.

The SSI is a tournament series envisioned and organised by competitive veteran and CSM member Jin’taan. The tournament features eight teams from across the community in an all-out match on Thunderdome. After January’s first edition of the SSI has received a great reception from both teams and viewers, the second edition improves on January’s lessons learnt and seeks to reinforce the quick, brutal game play that is characteristic of the SSI.

Teams are limited to a full roster of nine people, of which six people can be on field at any one time. Each team will play at least two, up to three matches on the first day of the tournament and then compete in a single-elimination bracket on the second day.

In a departure from the AT format, teams do not choose their compositions based on points, but instead on a slot system. Per tournament day, each team submits five compositions that are then made public a week ahead of the first day. Teams can only use a composition once. In a twist that will doubtlessly lead to mind games, the fits are kept under wraps. This rule, we have been told, is to allow for a wider variety of ships than would ordinarily be seen in tournaments, where meta compositions are favored. Similarly, picks & bans—where, in the AT, each team can ban two ships—are modified so that each team can ban one composition of the opposing team.

You can read about the exact slot selections in the public rules of the SSI. However, the most important distinguishing feature is that both Logistics and Recon cruisers are banned, reducing the available control on the battlefield and virtually guaranteeing ship losses and self-reliant compositions.

For this edition, eight team from across the community have been invited. Some of the teams are known contenders, with some unique groups being added: 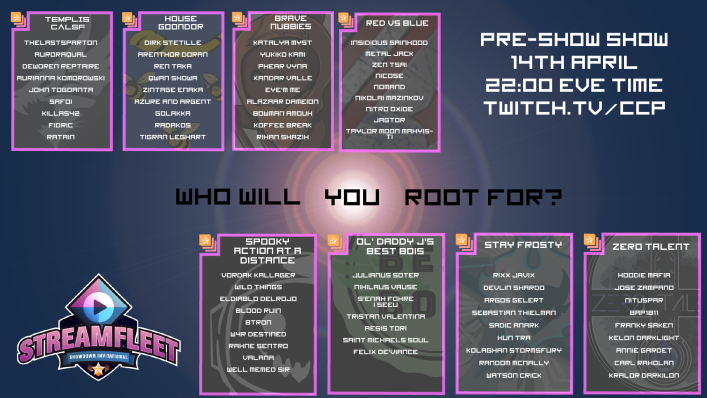 INN has asked Jin’taan about the obvious omission of any wormhole groups. It turns out that any inquiries on that end have not resulted in teams stepping forward. If you are a J-Space corporation and would like to be featured in the next edition of SSI, please reach out to Jin’taan.

Of course, no competition is complete without something to compete for! As part of their support for the Invitational, CCP is putting up the following prize pool:

You can see VoDs of SSI:1 on this Reddit thread. For further information on the tournament, including compositions when they are released, keep an eye on the Streamfleet page, follow Streamfleet on Twitter, or join their public Discord.  If you want to tune in earlier for some discussion and analysis, join the SSI:2 pre-show at 22:00 EVE Time on 14 April.

Space journalist at INN and button pusher at Amok., I write about Stellaris, science and interesting things that I come across when not actively playing EVE.